All lanes of GW Parkway reopen after sinkhole causes closure 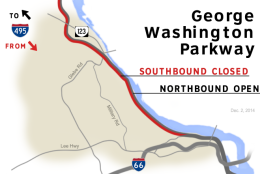 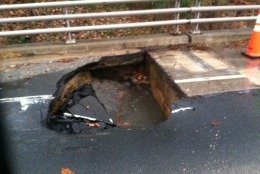 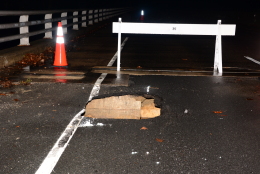 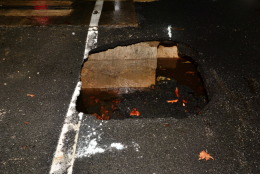 UPDATE 4:15 a.m. 12/03/2014: U.S. Park Police now say that one
right lane of southbound George Washington Parkway is blocked between Route
123 and Spout Run Parkway at Windy Run due to the sinkhole.

It is not yet known how long the one-lane closure will last.

UPDATE 8:52 p.m. 12/02/2014: The left lane of the southbound George
Washington Parkway is open, and the right is predicted to be open by morning.

EARLIER: WASHINGTON — Federal highway officials hope to reopen the
southbound lanes of the George Washington Parkway in time for the Wednesday
morning commute.

The Federal Highway Administration is working with the National Park Service
to make emergency repairs to a stretch of the road south of Route 123 after a
portion of the road collapsed Monday evening. The two southbound lanes are
closed between the Capital Beltway and Spout Run, which triggered delays
during both the morning and afternoon commutes.

Repairs are expected to be completed overnight and the lanes could reopen by 5
a.m., the highway administration said in a 3:30 p.m. update.

Repairs began Tuesday morning and continued throughout the day keeping a major
commuter corridor unavailable during both the morning and afternoon rush
hours.

Despite the highway administration’s hopeful prognosis, WTOP Traffic Director
Jim Battagliese says commuters would be wise to plan for the lanes to remain
closed Wednesday morning.

Both the Inner and Outer loop ramps to the parkway also remain closed.

Northbound lanes of the parkway are open to traffic. And southbound traffic
can enter the parkway at Spout Run.

The sinkhole began to appear Monday evening south of Route 123 and eventually
triggered a four-car wreck as vehicles tried to avoid the deep hole.

The Park Service says the hole is about 10 feet wide by 5 feet in length.

The collapsed roadway is primarily in the right lane but has also undermined
the left lane meaning crews will have to tear up both lanes to back fill the
hole. However temperatures are too cold to repave the road Tuesday;
temperatures must be 45 degrees or warmer to pave with asphalt.

An experimental asphalt could be used instead or a metal plate could be
brought in for a temporary fix, but only if the filled hole holds, according
to the Park Service.

If the fixes hold, the road could reopen in time for the Wednesday morning
commute but park service officials don’t expect to know for sure until
sometime tonight.

The closure triggered major delays on roads leading toward the parkway
including Chain Bridge Road, Interstate 66, the Dulles Connector Road and the
Beltway. The ongoing closure also contributed to a rough evening commute for
drivers throughout the region that was compounded by rain and a presidential
motorcade that traveled from Bethesda into Virginia and back into the
District.

Motorists also complained that the highway variable message signs in both
Maryland and Virginia did not inform drivers that a significant stretch of the
parkway was closed. Drivers who entered the parkway from the Beltway in
Maryland became mired in traffic before the detour at Route 123 and many
drivers became stuck in the mud as they tried to cross the median to escape
the delays and head back north.

Virginia and Maryland transportation officials say no one authorized to turn
on the variable message signs was working when the lanes initially closed
Monday night. That problem has since been corrected and signs in both states
now warn drivers that the ramps to the parkway are closed.

Alternate routes to work around the closure for those traveling into the
District or to Reagan National Airport:

After crashes, breakdowns, experts says it’s ‘safest to remain inside of your vehicle’