As a little girl, Ashley Sanchez knew she was good at soccer. She was on one of the best club teams in California, and even so, she could “mess around with the ball” before getting serious and scoring goals.

However, one kid would get her attention: Karina Rodriguez. Her defense and smart plays gave Sanchez fits whenever they played each other. When their youth teams would face off, Sanchez said she would get mentally locked in for the first time in her life and warm up for battle against her childhood rival.

“I just remember going against her. My dad would have to give me pep talks,” the 23-year-old said. “He was like: ‘You know, she’s really smart player. You actually have to think about how you’re going to beat her right now.'”

“‘I’m taking this chick down,'” Rodriguez said, chuckling at the memory. “My dad would also be like: ‘OK, you need to keep your feet moving. She’s really crafty. Don’t let her cut you.'”

The rivalry turned into friendship, which grew more once Sanchez “recruited” Rodriguez to play on the club team So Cal Blues, as well as for the same college team at UCLA.

As professional soccer players with the Washington Spirit, the duo told WTOP that they cherish their relationship as they become role models for girls and the area’s Latino community.

“I think a lot of fans think that we met in college when reality, we’ve been friends since we were probably about 12,” Rodriguez said. “It’s just crazy to see how our friendship has progressed, and just to play through basically every level that you could play through, going from club teams to youth national teams, to college to professional. I think it’s been a big blessing.” 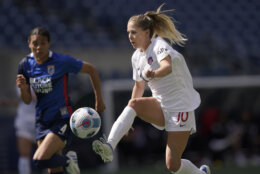 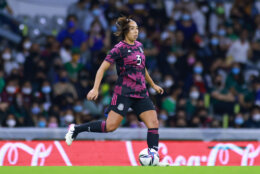 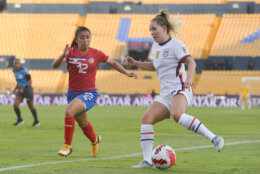 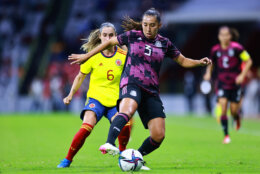 Sanchez, drafted by the Spirit No. 4 overall in the 2020 NWSL College Draft, called it “weird” to not be playing on a team without her Southern California friend alongside her. Sanchez said Rodriguez had become an integral part of her life, and that she had become close with Rodriguez’s family. Everyone became so tight-knit that Rodriguez’s mother even drew a stick figure inside a family photo and named it after Ashley.

“I’ve been so used to having her all the time,” said Sanchez. “We’re able to be friends outside of soccer, and we hang out and do normal things together. It’s just really nice to have someone that’s just not my teammate.”

When Washington and Orlando placed their bids to sign Rodriguez as a discovery player in 2021, both players tried to temper their expectations. However, Sanchez recalled telling Spirit management at the time: “You need to get her. Like, you will get her. I need her to be here.”

Their friendship has made it easier for them to live on their own for the first time as well. Both come from families with roots in Mexico, and relatives always lived nearby in California. Both acknowledged leaning on each other as a reminder of home since landing with the Spirit.

“It’s definitely been quite the adjustment coming to the East Coast, especially since we spent our entire lives on the coast where the Mexican culture is huge,” said Rodriguez.

“You can’t really fully get the full experience and good authentic food, so that’s just really interesting,” Sanchez said of the Mexican food choices in the D.C. area. “I think I took that for granted a little bit, and growing up and coming here, I just assumed, ‘Oh, you know, all across America, it’s like this,’ and it’s not.”

While they continue to adjust in their regular lives off the field, the duo has assumed different roles for the Spirit. Sanchez is a consistent starter, dazzling fans with her dribbling skills as part of Washington’s attack with teammates Ashley Hatch and Trinity Rodman. In two seasons with the Spirit, the Pasadena native has eight goals and five assists.

Meanwhile, Rodriguez has remained a reserve player for Washington, playing 12 games in two seasons. In this year alone, the defender started in four of eight matches, playing 340 minutes as she competed with Sam Staab and Amber Brooks for playing time at centerback.

Despite her limited playing time in the club season, Rodriguez made the big move to switch allegiance to Mexico, making her debut on the senior national team in February 2021. The Torrance, California, defender was a part of the U-17 U.S. women’s national team that — alongside Sanchez — won the CONCACAF Women’s U-17 Championship in 2017.

When asked about the switch, Rodriguez said she is honored to represent her American and Mexican heritage — both sides of who she is. She saw playing for El Tri Femenil as an opportunity to represent her grandparents, who moved from Culiacán and Zacatecas to the U.S. for a better life.

“They gave up their comfort; they gave up their style of living; they gave up everything that was known to them to come here and create a better life and a better opportunity for us,” said Rodriguez. “Just to have the ability also to represent them as well, and where they’re from and who they are, is just an honor.”

Sanchez, whose family roots are in Jalisco, understands the emotional pull. When playing for the U.S. during the CONCACAF W Championships in World Cup qualifying this past summer, it was the midfielder’s first time playing in Mexico and taking on El Tri Femenil.

Once the match was over and Mexico was eliminated, Sanchez embraced former college teammate Maricarmen Reyes in an emotional moment. She recalled feeling “sad that they didn’t qualify” and immediately began crying with Reyes.

“People look at me, and it’s like, ‘Oh, you’re white,’ until they see my last name. And then they’re like, ‘Oh, are you Mexican?’” Sanchez said about identifying as Latino. “For me, to have people include me is kind of like a big thing for me, especially [for] playing soccer and coming from a family that loves soccer, and it being such a part of the Mexican culture.”

Going forward, the pair said they would love to see the NWSL and the Spirit find more ways to tap into the Latino market in the U.S. Currently, the league does not provide any Spanish-speaking broadcasting of its games. However, some teams celebrated Hispanic Heritage Month-themed games, and until mid-2021, the Spirit released news releases in Spanish.

NWSL Commissioner Jessica Berman said in July during her listening tour of D.C. that while the league has not had discussions with Spanish broadcasters such as Univision or Telemundo, figuring out how to grow its reach is a topic of conversation in the league’s offices. Univision currently shows games from Mexico’s first-division women’s soccer league, Liga MX Femenil, and Telemundo is the Spanish-speaking broadcaster for the FIFA Men’s and Women’s World Cups.

Sanchez said Liga MX Femenil highlights or reruns were shown on TV all day while she was at the W Championships. Giving equal access to a community of people who don’t know about NWSL clubs in their own region could be an opportunity to help grow the game, she said.

“You see it in the stadiums that Tigers [have]; they sell out stadiums — and they have some pretty big stadiums,” Rodriguez said of Mexican soccer fans. “The love and passion that they have for the game there is incredible, and I think tapping into that would be such a huge step for the women’s game, just between the U.S. and Mexico alone.”

In the meantime, the pair hopes their presence in the NWSL can continue to inspire young Latinas around the country to continue fighting for their dreams. When asked what she would say to a young player who wants to play professional soccer when she gets older, Rodriguez said, “Dream big.”

“I think it’s really important for us playing now to make this an attainable job and something that people glorify just as they do for the men,” Rodriguez said. “I think I would just tell [their parents] to continue to be their biggest cheerleader, never doubt them and always make them feel like they can accomplish their dreams.”