CLEVELAND (AP) — For the first time in six years, the Cleveland Browns have a winning record.

They want to keep it that way.

Baker Mayfield threw two touchdown passes, Nick Chubb ran for two more, Garrett had a key sack and the Browns moved over .500 for the first time since 2014 with a 34-20 win Sunday over the Washington Football Team, which lost rookie defensive end Chase Young to a groin injury.

With their second straight win under first-year coach Kevin Stefanski, the Browns are 2-1 for the first time since 2011. It’s also the first time they’ve had a winning record since Week 14 in 2014, when they were 7-6 before dropping their last three and costing Mike Pettine his job.

Cleveland had gone 90 consecutive weeks without a winning record. The Browns won just four games from 2015-17.

And while the start is notable, Stefanski downplayed its significance.

Young, the No. 2 overall pick in this year’s draft, left in the second quarter with his injury. The former Ohio State All-American had an early pressure on Mayfield, but otherwise had little impact before he went out.

Washington coach Ron Rivera didn’t have a specific update on Young, who will receive more treatment and evaluation Monday. Young joined his teammates on the sideline in the second half and was animated while cheering them on.

Garrett’s strip sack and recovery midway through the fourth effectively sealed Cleveland’s win. He had a similar play last week in a win over Cincinnati.

“That is really what we expect from Myles,” Stefanski said. “I know he expects it of himself. We need him to play great, and when it turns into a pass-rush game, he is built for that. You get an honest day’s work out of Myles Garrett.”

Chubb then scored on a 20-yard run with 8:40 left to make it 31-20, the TD coming after linebacker B.J. Goodson intercepted Haskins at the Washington 35.

Chubb finished with 108 yards on 19 carries and the Browns leaned on the third-year back to wear down Washington in the fourth.

“We take pride in those 2-yard dirty runs because we know it takes a toll on the team, and eventually, we will bust one,” Chubb said. “The whole game everybody kept telling me, ‘Just be patient. It is going to pop. It is going to pop.’ It worked for us.”

“My teammates did a great job trying to keep my head up knowing there were plays I wish I could have back,” said Haskins, who finished 21 of 37 for 224 yards. “I’m going to make sure I’m better and take the blame for what I did and get better from it.”

Young came into the game tied for the league lead with 2 1/2 sacks, and the Browns spent the week scheming ways to slow him down.

Without Young, Washington’s defensive front lost some of its teeth and the Browns took advantage.

Chubb’s 16-yard TD in the second quarter was a thing of beauty.

Taking a handoff and going right, Chubb cut back, made one Washington defender miss badly, ran out of another tackle and then powered his way in to make it 10-7.

The game marked the first time two female coaches were on the sideline with a female official on the field.

Jennifer King is on Washington’s staff, while Callie Brownson is the chief of staff for Stefanski. Sarah Thomas was the down judge.

“All we’re doing is just creating opportunities for people who deserve it.”

Haskins, Young, Washington safety Landon Collins and defensive end Montez Sweat raised their fists during the national anthem. However, players on both sidelines stood throughout the playing.

Washington: Inman hurt his wrist in the fourth quarter. … Besides Young, the defensive line lost depth when tackle Matt Ioannidis injured his arm in the first half.

Browns: CB Denzel Ward (groin) started after being listed as questionable, but didn’t play in the second half. … Stefanski said KR/WR JoJo Natson will have an MRI on his injured knee.

Washington: Host their neighbors, the Baltimore Ravens, next Sunday.

Browns: Visit Dallas next Sunday for the first time since 2012. Cleveland lost in overtime on its previous trip to Jerry World. 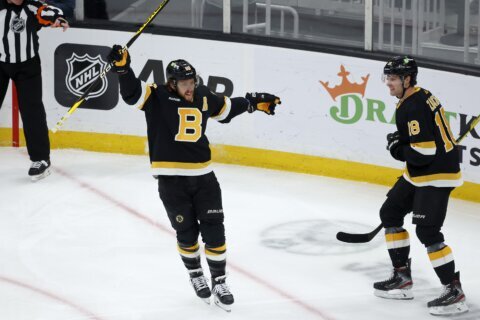