When most singers perform the national anthem, they linger on one word: “free.” It’s the final high note, the last word of the penultimate line.

If you’ve heard the anthem sung by local singer D.C. Washington — and if you’ve been to a Nats, Wizards, ‘Skins or D.C. United game in the last decade, there’s a decent chance you have — you’ll know that’s not his style. He eschews the dramatic hold, transitioning immediately into the final line. The only time he deviates from the steady, up-tempo rhythm of his rendition is on the final word, which he belts like an opera singer: “brave.”

Washington’s anthems sound a lot like those of many military members — straightforward, devoid of the American Idol audition shrills that have proliferated across professional sports pregame ceremonies in the last umpteen years. They’re forged by his 22 years in the Army, from which he retired as a Lieutenant Colonel. But they still have hints of his background as a lifelong church choir singer.

“When I stand out there, it’s not about me,” he told WTOP in a recent interview. “I don’t say that with any kind of false modesty. I can stand out there and take 15 minutes to sing the anthem, and it still won’t be about me.”

Washington said he’s not from a military family, but his father served short time in World War II and his brother was Marine in Vietnam.

“I think I was pretty patriotic before I went into the military,” he said. “I’m pretty hyped about my country. I love being who I am.”

Washington didn’t grow up a big sports fan (and, he admits, still isn’t that big a fan), but was turned on to baseball in the summer of 1978, while living in upstate New York. Before New York Yankee games, an opera singer named Robert Merrill sang the anthem every Opening Day for three decades. Washington didn’t care about the Yankees; he was a big fan of Merrill’s, though.

“I loved watching him sing the anthem every day,” he said.

An opportunity didn’t present itself on that level for Washington until about 25 years later, when a member of his church congregation, who worked for the Burgundy and Gold, took a CD recording of Washington singing the anthem with him out to Ashburn. Washington made his NFL debut that year, and sang in the Nationals’ closing years at RFK.

He’s also been a regular for D.C. United, singing the final anthem at RFK and one of the first at Audi Field. He’s sung for the Wizards a couple times, but surprisingly, has not been brought in for a Capitals game (cough, cough).

He’s got plenty of big games on his resume, but like D.C. sports in general, not too many big wins. He’s sung a Nats playoff game every year since 2014 and even sang for the MLB Futures Game, part of All-Star Weekend last year at Nationals Park. He also sang before RG3’s scintillating win over Dallas in 2012, only to be called back to sing at the playoff game against Seattle the next week in which the young phenom would tear up his knee, an injury from which he never fully recovered.

But Washington said he enjoys the less prominent venues at least as much as the biggest stages.

“I’ve done anthems for Little League games,” he said, something that’s requested of him often. “I just did an anthem for the Northern Virginia Swimming League.”

You’re probably wondering about his name. Such a perfect stage name as D.C. Washington is inspired for someone who plies his trade most publicly singing the national anthem at sporting events around our nation’s capital. Of course, his name’s not actually D.C. Washington. It couldn’t possibly be. Right?

Some things are just meant to be.

Dwight Clyde Washington was born and raised in McGehee, Arkansas, a thousand miles southwest of the capitol city with which he shares his name. It was his grandmother who wanted his initials to be D.C., though she never said why. Clyde was Washington’s mother’s best friend’s dad’s name. He’s gone by D.C. his whole life, except for a short spell when he lived in Mississippi in the Army, the only place where he is referred to as Dwight.

Well, not the only place.

“My wife calls me Dwight when she wants to get my attention,” he laughed.

Washington attended college as a music major and had intentions to be a band teacher after graduation, once he fulfilled his two years of mandatory military duty. But it was his history before adulthood that better informs of his worldview.

When Washington started ninth grade, he was still attending a segregated high school. The next year, in 1970, Arkansas finally integrated its schools. He’s seen the progress our country has made on that front firsthand, but also understands how far we still have to go.

As a Black man whose identity is so strongly tied to both his military service and singing the national anthem in the nation’s capital, it’s no surprise that when Colin Kaepernick started making headlines for his silent protests, people began asking Washington his opinion. That audience included a couple reporters. But he didn’t feel comfortable speaking up at first.

“I stayed away from it, to be honest with you,” he said.

One day, though, something changed. He couldn’t point to anything in particular that flipped the switch in him, but he took to Facebook to express himself.

“I understood that what he was doing was not about denigrating the military, denigrating the flag, or even denigrating the anthem,” said Washington. “It was about trying to say, ‘I don’t have a voice, except this voice, to bring attention to something that right now I don’t think is getting enough attention.’”

Washington has been given his own voice, ironically, through the very same anthem Kaepernick chose as a venue to protest. He has come to understand our national anthem through the prism of what’s often called the Black national anthem, “Lift Every Voice and Sing.” While Washington considers every offer to let him sing the anthem an honor, and has no desire to make such a statement himself, he understood the feeling Kaepernick expressed, that he felt oppressed by the country he calls home.

“The reason I can sing the national anthem — ‘Oh say can you see?’ — is because I learned to understand about faith and hope in a country that was not always faithful to me or hopeful to me,” said Washington.

He interacts with the world on social media, but is otherwise fairly ambivalent to new technology. His music isn’t on Spotify; he doesn’t have a YouTube page, or even a website to promote his work. He recorded one CD (that’s what he calls them, not albums) a few years back to help raise money for widows in the congregation at Immanuel Bible Church. He’s got another one due out in the next month, featuring a track with Nationals former coach and current broadcaster Bo Porter, which will benefit the Central Union Mission in Downtown D.C., where he’s been on the board the last 16 years.

He said he knows it sounds corny, but Washington isn’t shy to profess his love for Jesus and to try to walk in his path. He thinks about that a lot when it comes to the arguments about the anthem, about patriotism in our country, and about trying to learn from one another instead of bickering with total strangers online.

“It’s important to have what I believe challenged,” he said. “It’s OK. Because sometimes it might change my mind. Other times, I may be able to better articulate [my beliefs], because now I’ve engaged with this.”

He objects to the all-or-nothing framing many issues are too often given, especially the concept of patriotism and the implications in the question that is presented: Do you love your country? 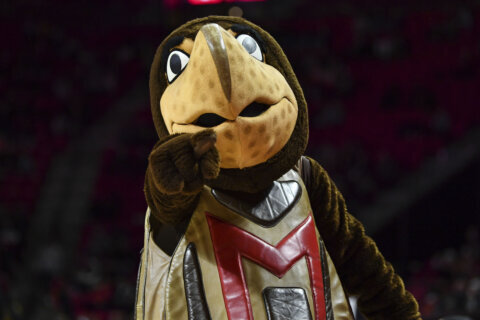