The gun came partially out of the officer's holster, then went off. The suspect was hit in the leg, but still managed to limp away on foot.
Listen now to WTOP News WTOP.com | Alexa | Google Home | WTOP App | 103.5 FM

WASHINGTON — An 18-year-old man was shot Saturday after a confrontation with a police officer while attempting to shoplift from a grocery store in Southwest D.C.

Miguel Smith, of Oxon Hill, Maryland, tried to leave Safeway on Saturday morning with around $15 in groceries he hadn’t paid for, according to D.C. police.

An officer confronted Smith, who made a grab for the officer’s gun.

The gun came partially out of the holster, then went off. Smith was hit in the leg, but still managed to limp away on foot.

Police found Smith at the Rhode Island Avenue Metro stop after police received a call that someone had been shot.

D.C. police said they determined that Smith was the suspect from the Safeway robbery.

He was taken to the hospital for treatment and then arrested on charges of theft and assault on a police officer. 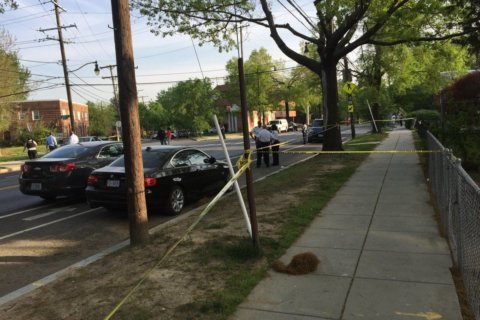 Art Collector pulls away to win Blue Grass at Keeneland