The Baltimore Orioles beat the Nationals for the second straight night as Mark Trumbo provided the walk-off single in the 12th inning of a 5-4 comeback by the Birds at Camden Yards. Baltimore trailed 4-1 following Adam Lind's three-run blast in the eighth, but Adam Jones hit a solo homer in the bottom half and the Orioles scored twice in the ninth en route to their season-high, sixth straight win. Washington was one out away from a 4-2 victory until Jonathan Schoop doubled in a run and J.J. Hardy followed a with an RBI single.
Listen now to WTOP News WTOP.com | Alexa | Google Home | WTOP App | 103.5 FM
(1/16) 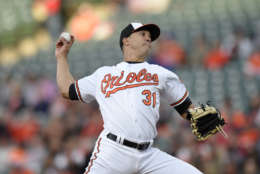 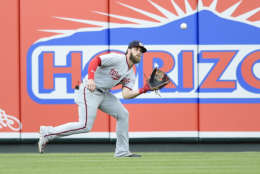 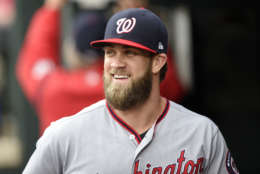 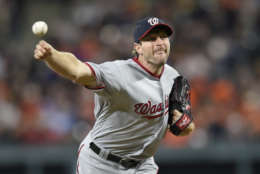 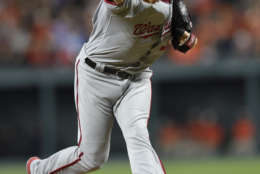 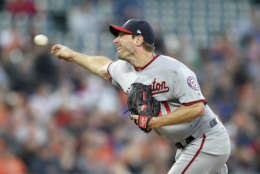 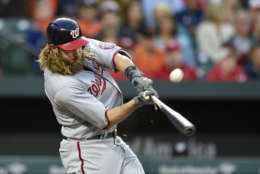 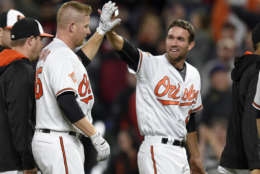 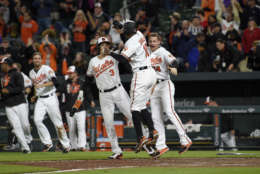 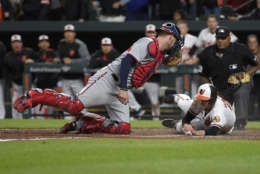 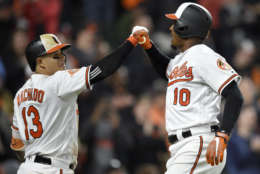 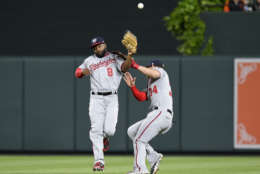 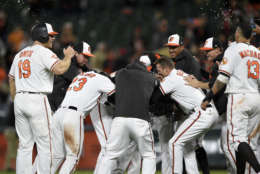 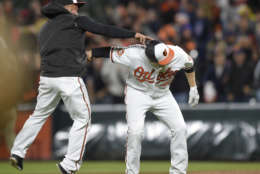 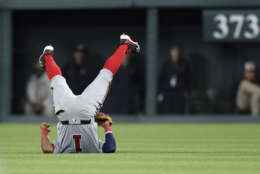 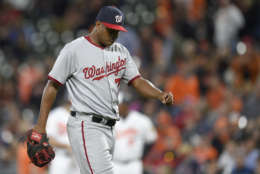 BALTIMORE (AP) _ Down by three runs against Nationals ace Max Scherzer with six outs to go, the Baltimore Orioles appeared destined to finish a successful homestand on a sour note.

“A great pitcher on the mound for them,” Orioles slugger Mark Trumbo said, “so we knew we were really going to have to fight.”

Adam Jones began the improbable comeback with a home run and Trumbo completed the turnaround with a 12th-inning RBI single that provided Baltimore with a 5-4 victory on Tuesday night.

After finishing a two-game sweep of their neighbor to the south, the Orioles have won six in a row and have the best record in the major leagues at 22-10.

“The guys just never give in,” manager Buck Showalter said. “They think they’ve got an opportunity as long as they have an at-bat and some outs left.”

Jones’ homer got Baltimore to 4-2 in the eighth, and the Orioles added two runs in the ninth against Enny Romero, one of several struggling members of the Washington bullpen.

Trumbo then won it with a bases-loaded single off Jacob Turner (1-1).

“This is definitely a good win,” Trumbo said.

Adam Lind had a three-run, pinch-homer in the eighth inning to break open a duel between Scherzer and Ubaldo Jimenez and put the Nationals up 4-1.

But the lead wouldn’t hold up.

“It’s frustrating,” said Nationals second baseman Daniel Murphy, who homered before being ejected in the 10th. “Max threw the ball great today. Adam comes up with a huge at-bat right there. It’s a ball game we would have liked to have won although we didn’t. We’ll head back home and see if we can get back on track.”

The interleague series shifts to Washington for two games on Wednesday and Thursday.

Baltimore can only hope the momentum generated by a 5-0 homestand continues in a stadium less than 40 miles down the road.

Singles by Jones and Manny Machado, along with an intentional walk to Chris Davis, loaded the bases for Trumbo in the 12th. Trumbo hit the first pitch to left field, ending the game just seven minutes short of four hours.

Logan Verrett (2-0) pitched three shutout innings for the Orioles, who improved to 13-3 at home.

Washington has lost three in a row for the first time this season. This defeat was more distasteful because with two innings to go, a victory appeared in hand.

“It takes a big emotional toll,” manager Dusty Baker said. “One of the biggest downers in baseball is when you blow a game late. We’ll see how we come out of this.”

The score was tied at 1 when Anthony Rendon and Matt Wieters opened the eighth with successive singles. Lind stepped in for No. 9 hitter Michael Taylor and drove a 1-1 pitch over the center-field wall.

It was his third pinch-homer this season and eighth of his career. He’s 6 for 11 with nine RBIs as a pinch hitter this year.

Scherzer struck out 11 and gave up two runs and four hits over eight innings. The 2016 NL Cy Young Award winner has gone at least six innings in all seven starts this season and has reached double digits in strikeouts three times.

Scherzer issued two walks over the first five innings and held the Orioles hitless until Seth Smith homered with one out in the sixth.

Nationals: RHP Koda Glover (hip) will throw for Double-A Harrisburg on Wednesday in his first rehab assignment since being placed on the DL on April 26. — Shawn Kelley (back) is “feeling real good,” said Baker, who expects the right-hander to return to the club on Friday when he’s eligible to come off the DL. — INF Stephen Drew (hamstring), sidelined since April 12, might be ready for a rehab assignment this weekend, Baker said, adding, “we miss Drew big-time.”

Orioles: Closer Zach Britton (left forearm strain) won’t return from his second trip to the DL until the team is certain he’s healthy. Though there is no time frame, Britton told The Associated Press, “A 60-day DL stint was never something brought to my attention.”

Nationals: Stephen Strasburg (3-1, 2.66 ERA) gets the call for Washington on Wednesday night when the series shifts to Nationals Park.

Orioles: Wade Miley (1-1, 2.27 ERA) pitches for the first time since he was struck in the wrist and upper thigh by line drives in the first inning last week.