As of shortly before 10 p.m. Tuesday, even after the additional ballots arrived, there were reports of hundreds of people still waiting to vote at Brandywine Elementary. The ballot snag has also delayed reporting of voting results statewide.
Listen now to WTOP News WTOP.com | Alexa | Google Home | WTOP App | 103.5 FM

WASHINGTON — A ballot shortage due to unexpectedly high turnout resulted in long lines and frustration at some polling places in Prince George’s County, Maryland, on Election Day.

Voters at Hyattsville Middle School, Upper Marlboro Community Center and Brandywine Elementary reported waiting in line for up to four hours for extra ballots to arrive.

As of shortly before 10 p.m. Tuesday, even after the additional ballots arrived, there were reports of hundreds of people still waiting to vote at Brandywine Elementary.

The ballot snag also delayed reporting of voting results statewide. The Maryland State Board of Elections, which said it would not publicly post any results until all polls have closed, did not start publishing results until more than two hours after the 8 p.m. poll-closing.

Maryland elections officials said all voters who were in line by the time polls closed at 8 p.m. were still allowed to vote.

Daneen Banks, deputy administrator for the Prince George’s County Board of Elections, said the delivery of additional ballots Tuesday afternoon was delayed after couriers got stuck in traffic.

“We have disseminated everyone that we have in our building to the precincts that needed ballots,” she said Tuesday evening, “and they are indeed en route. And I’m asking any of the voters who are there to please stay.

Banks said workers were not expecting this level of turnout — especially for a midterm election.

“We actually sent almost the same allocation of ballots that we sent for the last presidential election … so we did not expect that any of our precincts would run low,” she said.

Banks said she and her fellow election workers understand the frustration.

“Bear with us as we continue these deliveries, and we will accommodate every voter,” she said. 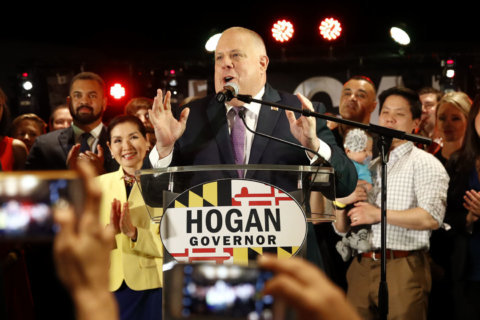