Hogan sat down for a question-and-answer session with David Rubenstein, co-founder of the Carlyle Group at the Economic Club of Washington’s luncheon in Bethesda on Thursday.
Listen now to WTOP News WTOP.com | Alexa | Google Home | WTOP App | 103.5 FM

BETHESDA, Md. —  Maryland Gov. Larry Hogan, a Republican running for re-election, said he’s focused on winning a second term, but when asked if he aspires to higher office he added, “I mean, you never say never”.

Hogan sat down for a question-and-answer session with David Rubenstein, co-founder of the Carlyle Group at the Economic Club of Washington’s luncheon in Bethesda on Thursday.

Hogan maintains high approval ratings, despite being a Republican in a state where Democrats continue to outnumber Republicans 2 to 1.

Hogan joked with Rubenstein, saying the question was whether he had considered running after serving a second term. Hogan said, “You didn’t say anything about 2020” adding quickly, “Just kidding.”

On the likelihood of getting Amazon to move to Montgomery County, Hogan said, “I think there’s a really good chance it’s going to happen.”

Maryland offered a multibillion dollar incentive package to draw Amazon’s “HQ2” to the state. A decision is expected by the end of the year, Hogan said.

Hogan pointed out that Amazon’s CEO Jeff Bezos was scheduled as a guest of the Economic Club in September. He told Rubenstein, “I think you should close the deal right here!” The crowd burst into applause as Rubenstein replied, “OK, we’ll try!”

The governor told a story that he said his communications team would not want him to share, but he said it shows how residents of the Governor’s Mansion have little to no privacy.

He explained that there’s a staircase that goes up three flights. In one of the first weeks in office, he woke one morning to start his day.

“I’m walking from my bedroom to an office that’s on the second floor thinking no one’s there, and I look over the rail and there’s people having a tour. I’m in my boxers, with a cup of coffee in my hand! So quickly I learned, there’s no privacy in the Governor’s Mansion.” Md. Gov. Hogan responds to efforts to protect abortion rights in the state 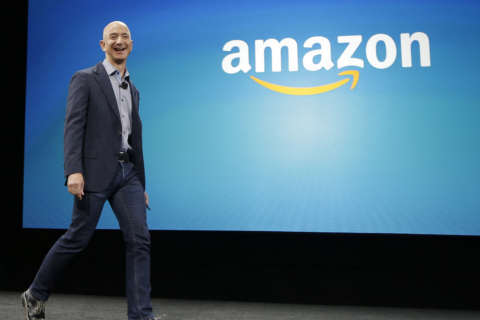 How does Maryland’s offer to Amazon compare to other offers?