Gov. Larry Hogan’s approval rating stands at 64 percent. When those surveyed were asked if they approve of the job that Hogan is doing, that support jumps to 75 percent.
Listen now to WTOP News WTOP.com | Alexa | Google Home | WTOP App | 103.5 FM

WASHINGTON — The latest poll in Maryland’s race for governor shows that while Democrats believe getting President Trump out of office is a “priority,” it’s not hurting Republican Gov. Larry Hogan’s favorability ratings.

According to the Gonzales Research & Marketing Strategies poll released Tuesday morning, Hogan’s approval rating stands at 64 percent. When those surveyed were asked if they approve of the job that Hogan is doing, that support jumps to 75 percent.

That comes as no surprise to Doug Duncan, the president of Leadership Greater Washington.

“Hogan’s done a very good job of distancing himself from Donald Trump,” said Duncan, a former Montgomery County executive who also ran for governor but dropped out of the Democratic primary in 2006.

Hogan’s also done a good job of reaching across the aisle to pass initiatives that matter most to residents, such as transportation, Duncan said.

He attributes part of Hogan’s wide appeal to his push on transportation issues.

“I will say for transportation in the Washington region, he has been the best governor we have had since Donald Schaefer. His support for Metro, for the Purple Line, for road improvements has been extraordinary,” Duncan said. “I think that’s why he’s polling so well down here.”

In possible matchups against Democrats in November, Hogan wins each contest with a double-digit lead, according to the Gonzales survey. “It’s going to be a tough race” for the Democratic challengers, said Duncan. “I think they knew that when they all entered the race.”

Among Democratic primary voters, Prince George’s County Executive Rushern Baker leads with 25 percent, and former NAACP President Ben Jealous is close behind with 23 percent. Maryland State Senator Rich Madaleno has 9 percent, and former Montgomery County Council member Valerie Ervin has 7 percent, although Ervin said Tuesday night that she will drop out of the race and throw her support behind Baker.

Noting that Baker is seen in a neck-and-neck primary contest with Jealous, Duncan said he was surprised that Baker “hasn’t put it away by now.”

In Duncan’s eyes, Democrats who are emphasizing education may be making a mistake — although the Gonzales poll shows that education remains a top concern, with 26 percent saying public education is a priority.

While Democrats have been looking for a “blue wave” nationally, Duncan said that in Maryland, that may be more like a “blue ripple” of Democratic strength.

“Now it looks like the wave may not be that strong, and Hogan has done an amazing job of positioning himself more as an independent politician than as a Republican,” he said. 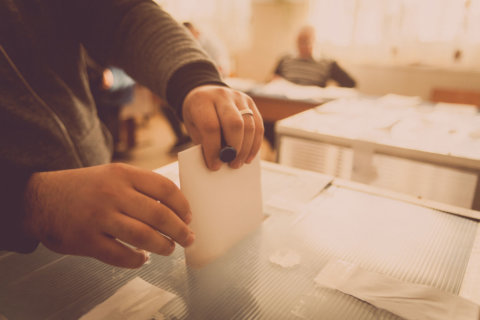 Maryland taking steps to ensure ballot security ahead of primary