For a week and a half at the Little League World Series, no team came close to Hawaii. The championship Sunday was no different.
Listen now to WTOP News WTOP.com | Alexa | Google Home | WTOP App | 103.5 FM
(1/7) 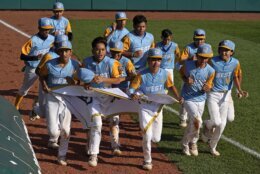 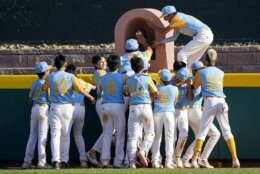 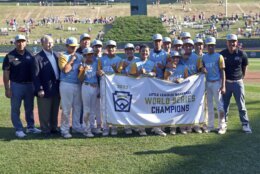 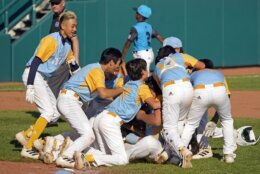 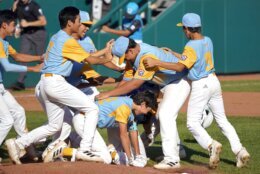 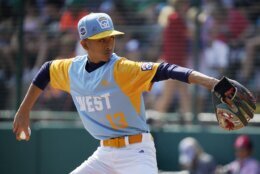 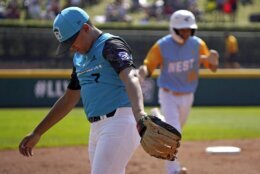 SOUTH WILLIAMSPORT, Pa. (AP) — For a week and a half at the Little League World Series, no team came close to Hawaii. The championship Sunday was no different.

Hawaii got back-to-back homers from Kekoa Payanal and Kama Angell in the first inning, sparking a 13-3 win in just four innings over Curacao.

How good was Hawaii? In six games, all victories, the closest margin was four runs. Hawaii outscored opponents 60-5.

Part of that run was without Oda, who missed several games with COVID-19. Oda also managed Hawaii’s 2018 team.

“After 2018, I thought the next time I came to Williamsport was going to be as a spectator,” he said. “I never thought in my wildest dreams I’d be back in 2022 coaching a team.”

Hawaii starter Jaron Lancaster was dominant once again Sunday as he threw all four innings, while only allowing three runs, three hits and striking out 10 Curacao hitters.

“I knew Curacao was going to be a great team,” Jaron said. “My mindset was to go out there, do my best and do my thing. I know my offense and defense got my back.”

Jaron’s father, James Lancaster, said all the work that went into the title run was worth it.

“It’s been a rough ride,” said Lancaster, whose family lives about 4,800 miles from central Pennsylvania. “We haven’t been home in over a month.”

Curacao took the first lead of any team over Hawaii in the tournament when Davey Jay-Rijke led off the game with what looked like a bloop single, but he bolted on to second when neither middle infielder were covering that bag. Davey-Jay eventually came around to score on a wild pitch.

“Sooner or later, someone’s going to score,” Oda said. “We told our kids to keep fighting and battling. It’s going to be a great day.”

Hawaii only trailed for a few minutes. A home run from lead-off hitter Kekoa to left field, and a shot by Kama that barely cleared the wall in center, reignited the Hawaii side and put the team from the West region up 2-1. It also chased Curacao starter Shemar Jacobus.

“Any time when someone can score a run that’s huge,” Oda said. “When someone hits a home run, the whole team gets excited and lifts everyone’s spirits.”

The game ended in the fourth inning when Kama hit a single down the left-field line that scored Esaiah Wong to clinch the victory and another championship for Hawaii.

Under Little League rules, a team wins if it is leading by 10 runs or more after four innings.

“I saw the ball go down and I saw coach sending in Ruston (Hiyoto),” Kama said. “I was very emotional. It was the best time I had in my life.”

Curacao sits at one title, which came back in 2004. But the team from a small Caribbean island with a population about the size of Springfield, Massachusetts, made it to the final in 2019 as well as this year.

“I’m so proud of these guys,” said Curacao Manager Zaino Everett, whose team won five elimination games to get to the title game. “We are a champion and the second team in the whole world. Nobody expected us to be here.”

After the trophy presentation and news conference were over, and most fans were gone, the Hawaii players celebrated their title in just the way a bunch of 10-to-12-year-old boys would. They went sliding on cardboard sheets down the big hill behind Lamade Stadium.