Killing time with an ax: Canadian pastime comes to the District

While Americans are content to toss beanbags or roll bocce balls, our north-of-the-border brothers are throwing axes — and they're about to let D.C. in on the fun.
Listen now to WTOP News WTOP.com | Alexa | Google Home | WTOP App | 103.5 FM

Like Jackie Chan or Yoda, Canadians come across as nice and chill, but they are capable of truly righteous action movie stuff.

While Americans are content to toss beanbags or roll bocce balls, our north-of-the-border brothers are throwing … axes.

And they’re about to let D.C. in on the fun.

Bad Axe Throwing, an Ontario-based chain, opens its 16th location at 2419 Evarts St. NE on Friday. It will offer groups an uncommon way to kill two or three hours. Individual league play is also in the works.

It’s the taboo of ax throwing that makes it so appealing, said Nick Jahr, operations manager.

“It’s so strange and everyone wants to try it,” he said. “And then once everyone tries it, I’ve never had a customer leave that just doesn’t enjoy it.”

On paper, there’s not much to ax throwing. You hurl the blade at a target that’s 12–15 feet away (depending on where the thrower wants to stand). Use two hands or one. A coach is on hand to show you the technique, which is pretty simple:

Once the muscle memory kicks in, it gets a little easier. Just be prepared to embarrass yourself a few times. Too often, it can miss the target altogether.

And before you ask, the answer is no: Alcohol is not allowed on the premises. Food, however, is quite OK.

So is, um, “decorating” the target, Jahr said. Several customers bring in pictures of ex-wives, ex-husbands, disliked politicians or merchandise from sports rivals.

Bad Axe Throwing is available for group events at a cost of around $40 per person. You can book online. For information about walk-in availability (and an open house Friday), check out its Facebook page. 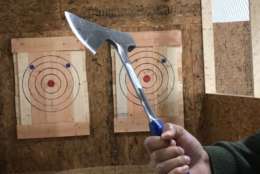 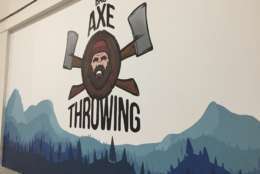 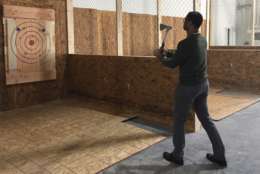 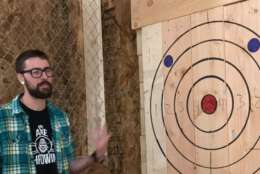 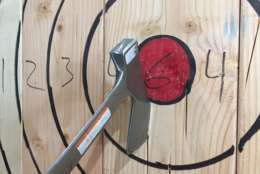 Filmmaker revisits case that challenged her and her 2 moms