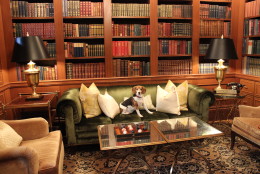 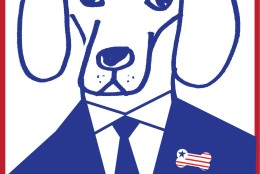 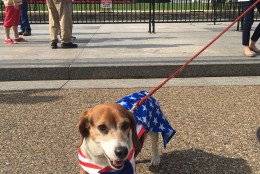 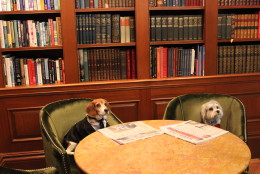 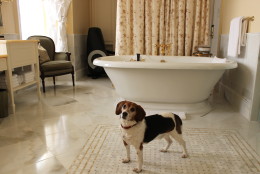 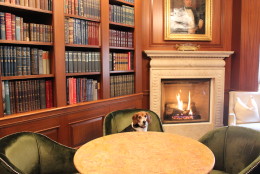 WASHINGTON — If you think the 2016 presidential race has gone to the dogs, you’re correct — at least according to Monti. That’s why the resident beagle of The Jefferson is throwing his hat — err, leash — into the race.

Confused? Don’t be. Phillip Wood, managing director of the D.C. hotel, says it’s all for fun and charity.

“Every time you talk about politics this year, everyone is disgruntled with all of the politicians,” Wood said.

The Jefferson decided to introduce a candidate well-liked by everyone, and at the same time, raise money for several charitable organizations.

“What better spokesperson than a potential presidential candidate [to do that]?” Wood said.

Monti — short for Lord Monticello — has lived at the upscale hotel, just blocks from the White House, since 2014 when he was adopted by The Jefferson. Wood said the beagle needed medical attention from the start, but quickly healed and adjusted to his new life of luxury.

During the week, Monti spends his days greeting hotel guests; on the weekends, he goes home with one of the staff members. But these days, he’s busy planning a political future.

His 2016 platform, dubbed “A Sniff in the Right Direction,” includes promises such as free bacon for all, the elimination of squirrels, continuing care for all senior dogs and the dog’s right to choose to live with a cat.

“Finally, he feels very strongly that we want to fight climate change, so that no dog will ever have to wear a raincoat again,” Wood said.

There, he’ll introduce his running mate, a dog named Buster from Hotel Nikko San Francisco, and a few other members of his canine cabinet. T-shirts, calendars and dog biscuits will be on sale to raise money for Dog Tag Bakery and Warrior Canine Connection. Cocktails and light fare will be available for humans.

If you can’t make it to the convention, you can follow Monti’s campaign on Instagram @LordMonti, or by using #Monti4Prez. For every new follower Monti receives now through Sept. 5, The Jefferson will donate $1 to the two charities.

Wood says you can always stop by the hotel and show your support for the pup, too.

“You’ll be glad to know that all this fame has not gone to his head. He’s still motivated by nice walks, a good supper and a good breakfast,” he said.

The Jefferson plans to use the momentum around Monti’s campaign to raise funds for charity throughout the election season.

Wood added, “On the off-chance that he does actually get into the White House, we’ll have to rethink that idea.”