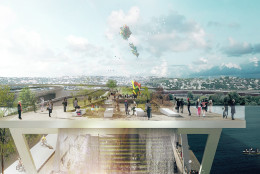 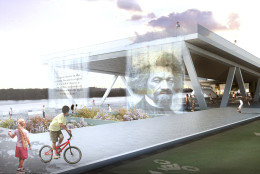 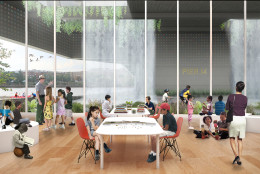 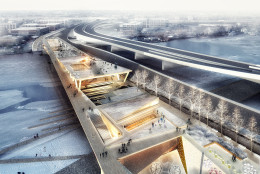 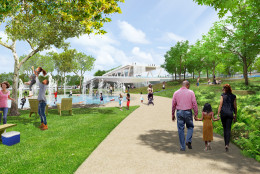 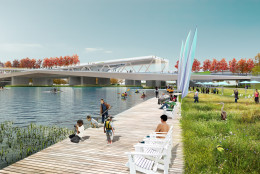 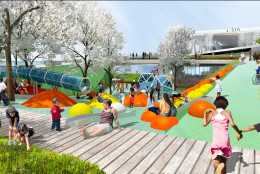 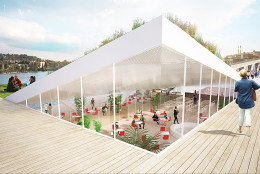 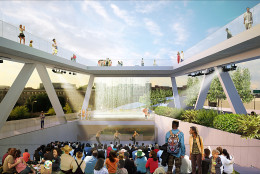 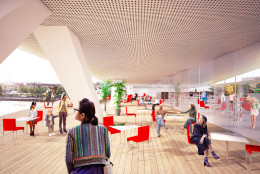 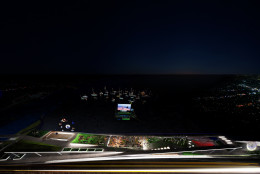 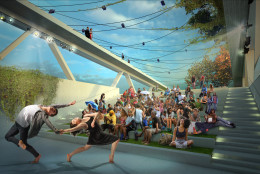 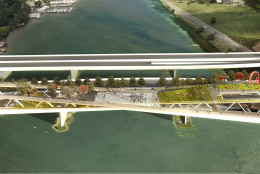 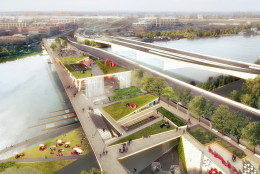 WASHINGTON — For years, the Anacostia River has been a physical, economic and cultural divide between the communities that reside on either side. But a big project is turning a decades-long vision of connecting D.C.’s Southeast neighborhoods into a reality.

The nonprofit Building Bridges Across the River at THEARC and the D.C. city government have been working on a way to re-purpose the remains from one of the city’s biggest construction projects, the 11th Street Bridge, and transform them into a destination, and a pathway, over the river.

Last October, a solution was proposed.

After more than 450 meetings with members of the community and a nationwide design competition, a plan was selected for the District’s first elevated park: The 11th Street Bridge Park.

Plans for the approximately 360-yard space that connects the Navy Yard with historic Anacostia will include plenty of green space, a café and urban agriculture area, a 280-seat outdoor performance space, an environmental education center and a multi-generational playground. The park, designed by OMA + OLIN, will consist of two platforms that meet in the center to form an “X,” creating two levels for the elevated park.

“It’s a simple but really elegant idea of two trusses that sort of come together and sort of touch right in the middle, reusing the old piers,” says Scott Kratz, director of the 11th Street Bridge Park project.

“I can’t think of another project, here in the nation’s capital, that in a single intervention can hit each of our four key goals.”

Those goals? In addition to connecting the two long-divided communities, the project aims to improve the health of residents living in the communities; restore attention to, and care for, the Anacostia River, and drum up economic business on both sides of the bridge.

“The communities that live along the Anacostia River have some of the highest health challenges in the District, and actually in the country,” says Kratz, who has been working on the 11th Street Bridge Park project for four years. He explains that Anacostia has a 41.9 percent rate of adult obesity and high rates of hypertension. Additionally, residents have limited access to fresh fruits and vegetables.

By creating an edible garden and providing an accessible space for farmers markets on the new bridge park, the project hopes to be a solution to Anacostia’s food-desert situation. And a play space will provide a place for children and adults to exercise.

“And having access to a safe place to play can be a significant intervention,” says Kratz, who adds that there are also plans to line the river’s banks with a hammock park.

“It’s important to be thinking about health — not only physical health, but also mental health,” he says.

The project’s third goal is to bring more people to the river and to engage visitors in the city’s natural resources.

“We’ve been giving a lot of attention to the Potomac, which is great, but it’s time to give some attention to the Anacostia. And it is this phenomenal natural resource that has been hiding in plain sight for generations,” Kratz says.

The bridge will feature kayak and canoe launches, as well as an environmental education center, and the river will provide water for the bridge’s waterfalls, which, in addition to providing aesthetics, will help re-oxygenate the water. Those working on the project are even considering installing reefs under the bridge, populated with clams and mussels, to help filter pollutants in the river.

Kratz says a key consideration is “How we make sure this bridge moves beyond ‘do no harm’ but actually physically improves the ecosystem of the Anacostia?”

There is no doubt the park will serve as an anchor for economic development for the surrounding communities, considering it expects to attract anywhere from 800,000 to 1.2 million visitors each year. And while the Navy Yard has experienced a developmental boom in the past several years, the Anacostia has seen less, so the project aims to bring a similar transformation east of the river.

“It’s intentional that the entire bridge gets wider as it gets closer to Anacostia … to put that level of activity closest to historic Anacostia,” Kratz says about the design’s intention to drive business east. “We want to make sure that this is a bridge that’s deeply stitched into the adjacent neighborhoods.”

But Kratz and others involved in the project are approaching the goal of economic development with caution. Kratz says signature parks can increase property values by anywhere from 5 to 40 percent. And while that’s a good thing for the community, it can also be a challenge for its residents when it comes to affordable housing and cultural and economic displacement.

Those working on the project have pulled together a core team to make sure the 11th Street Bridge Park is an equitable and inclusive development. Kratz says the group will devise a list of policy recommendations on the topics of affordable housing, workforce development and small business enterprises, to ensure that the thousands of people who helped shape this project continue to benefit from it.

Access is another core component of the project. The park will run alongside the local 11th Street Bridge, which has bike and walking lanes. Kratz explains the park will overlap with these lanes at certain points, so the bridge’s visitors and commuters can get on and off at leisure. The local bridge is also built to support a future streetcar.

“And that’s important because [the D.C. Department of Transportation], who we’re working with to build this, is open to the idea of having a streetcar stop either right on the center of the bridge or on either side, so you could get off the streetcar and walk 10 feet [to the park],” says Kratz, who says the city has plans for a streetcar to start at Bolling Air Force Base, run across the 11th Street local bridge to the Navy Yard, down to the Nationals’ baseball stadium and all the way down to the Southwest waterfront.

“That doesn’t solve all of our access issues, but it solves about 85 percent of them,” Kratz says.

While the new park will, no doubt, benefit many local residents and businesses, it’s not coming without a cost. Kratz estimates construction, which is expected to begin in 2017, will cost around $27 million, with $8 million in pre-construction and construction management costs.

The city has committed $14.5 million, allocated over three years. To finance the rest of the costs, Kratz is implementing a capital campaign and is looking at endowments to support ongoing programming and the project’s long-term goals.

But Kratz says he doesn’t want to wait until a 2018 ribbon-cutting ceremony to start bringing people down to the Anacostia — he wants to start now. This spring, the 11th Street Bridge Park and the National Parks Service will hold the first-ever Anacostia River Festival on Sunday, April 12, from noon to 4 p.m.

The event, part of this year’s National Cherry Blossom Festival, will include free kayaking and canoeing, musical performances, fishing workshops, a bike parade and more.

More than highlighting the much-anticipated park, though, Kratz hopes the event starts the first step of uniting the river’s two communities.

“It’s easy to think that people from that side of the river don’t come to [Anacostia], but it also works the other way,” says Kratz, who says there are plenty of residents in Anacostia who have never been to the Smithsonian, despite it being four Metro stops away.

“So I think that divide is on both sides. And if we can be successful in making sure the programming on there is driven by members on both sides of the river, providing that destination can get people down to the river and hopefully exploring each other’s neighborhoods.”