Coronavirus News: Fairfax Co. votes to increase substitute teacher pay | Is it time to get a COVID-19 booster? Which one? | Local cases of COVID-19 | How many in DC region are vaccinated?
Home » Lifestyle News » DC's newest development: A…

DC’s newest development: A tour of the Dupont Underground

Towering orange and yellow construction cranes have become a regular sight in D.C.’s skyline as the city continues adding apartments, retail and restaurants. But one of the most exciting developments in the District is happening underground.
Listen now to WTOP News WTOP.com | Alexa | Google Home | WTOP App | 103.5 FM
(1/12) 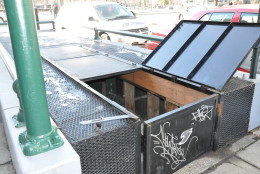 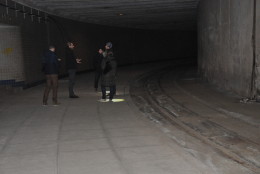 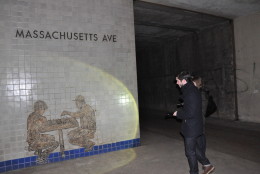 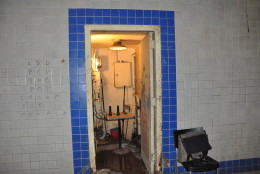 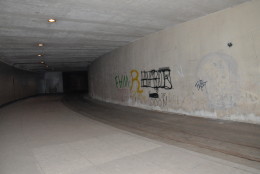 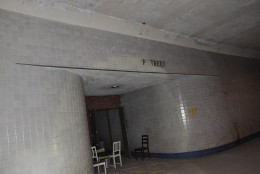 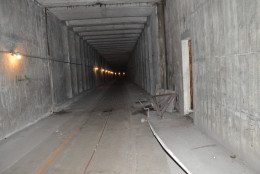 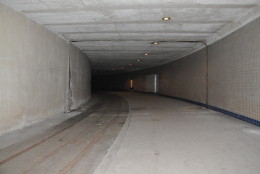 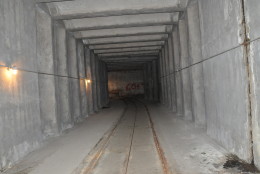 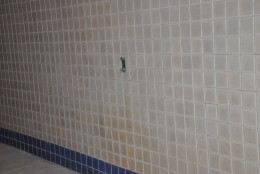 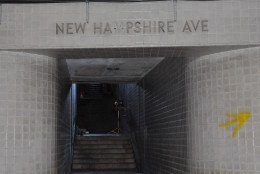 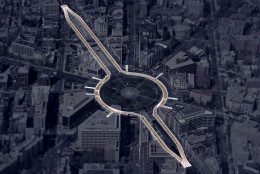 WASHINGTON — Towering orange and yellow construction cranes have become a regular sight in D.C.’s skyline as the city continues adding apartments, retail and restaurants. But one of the most exciting developments in the District is happening underground.

About 20 feet below Connecticut Avenue in Dupont Circle, members of the nonprofit Arts Coalition for the Dupont Underground (ACDU) are gearing up for a project they’ve been working on for more than a decade: transforming 75,000 square feet of abandoned space into a usable public destination.

The current Dupont Underground has served a number of purposes in its 65 years. It was originally home to D.C.’s trolley trains in the late 1940s. When the trolley and streetcar system was suspended in 1962, the underground space was used as a fallout shelter; then, in the ‘90s, it was converted into an underground food court.

“That was a bad idea; it was badly implemented and it failed within less than a year,” says Braulio Agnese, who serves on the ACDU board of directors and is the organization’s communication consultant.

After the food court shut down, the entrances to the underground were left open for some time. But the city eventually boarded and locked the stairways after realizing the entrances were collecting trash and attracting squatters.

If you’ve walked around Dupont Circle, chances are you’ve seen at least one of the nine entrances to the underground (there’s one next to the Starbucks and one near the Books-A-Million) and didn’t give the rectangular concrete blocks a second thought.

“For the last 10 years, people have just had no idea what those things are. They think it might be Metro infrastructure … There are lots of urban rumors about what they are,” says Agnese, who hopes residents soon associate those mysterious blocks with one of the city’s most dynamic and creative spaces.

Making Progress on the Platforms

In 2010, the city issued a Request for Proposal (RFP) for the use of the underground. After being chosen, ACDU was granted a five-and-a-half-year lease this past December for the space. Now, it’s time to get to work.

“I have the key in my pocket at all times,” Agnese says.

Even though the lease for the Dupont Underground is for the full 75,000 square feet, Agnese says the initial plan is to focus only on one third of the space — the 23,000 square feet that occupies the east platform as well as some tunnel space. And while Agnese is eager to open the underground, he says ACDU is not rushing its plans.

“The space is unusual — has a lot of potential, but it’s difficult. And so we’re being very deliberate in our approach to understanding the space and its potential,” he says.

“Unusual” is the correct adjective to describe the space. It’s incredibly linear — just 30 feet at the widest point, where the trolley platforms once stood. While it may be difficult to envision the underground space being used for anything other than transit purposes, ACDU is looking past the limitations of the layout. It plans to use the underground’s uniqueness to its advantage; it plans on getting creative.

Agnese says little will be done to enhance the design of the former transit space. “It wasn’t created to be aesthetically pleasing; it was purely utilitarian, but you get this kind of vaulted, scalloped space,” he says.

“We could easily do dropped ceilings and dry wall on the walls to condition the space and bring the power and the plumbing and stuff like that, but then you lose the character of the space, and part of the reason we love this space is not just for its location beneath Dupont Circle, but the nature of the space, itself. It’s got this great industrial aspect that’s really kind of rare in the city. We want to be able to celebrate that as much as possible, going forward … so all of the design solutions will have to be as elegant and as minimal as possible.”

In addition to power and plumbing, the coalition needs to upgrade the underground to include fire escapes and address other safety concerns. Figuring out the layout of the underground wasn’t an easy task for ACDU. Because the space was once used as a fallout shelter, as-built drawings and blueprints “are locked in Homeland Security files somewhere,” Agnese says.

Therefore, it’s up to ACDU to document the platforms and tunnels and understand what’s needed for short-term upgrades, as well as what a future build out of the space might require.

“There are a few unknowns, but no concerns in terms of structural integrity; there’s no asbestos down there or anything like that — it’s a concrete box,” Agnese says.

Construction costs are not coming from public funds, so ACDU is raising money for infrastructure improvements. Agnese says the improvements most likely won’t happen for three to six months, and in the meantime, the space may be used for one-off events.

The point of studying the space, Agnese says, is so that after the initial lease, ACDU will have a model on which to pursue a long-term lease with the city.

“The space will pretty much be a black spot, blank slate, open as it is to try different things. We expect to do temporary structures, different kinds of partitions … but any kind of permanent build-out would not happen until later, when we hope to tackle the whole site or as much of it as possible.”

And while ACDU has not decided what to permanently do with the space, it’s clear Agnese has his eye on the arts.

“There’s a good arts scene in D.C., but it’s a little fractured. We’d like to become a hub for that kind of thing,” he says.

“It’s a space that offers potential. There are a lot of good galleries, but they have small footprints, and this offers a chance for them to explore maybe other opportunities and different kinds of installations and events and what not.”

He also thinks the underground could attract exhibitions that currently bypass the city.

“We want to be nimble and provocative and foster forward-thinking kinds of discussion, both with art and design.”

Adding permanent and/or commercial tenants to the underground is another possibility, but Agnese says that likely won’t happen for a while.

“In addition to what we want to do on the cultural side, there are other things going on so that people are always coming to Dupont Circle and to the underground, for one reason or another.”

Regardless of its final purpose, Agnese says ACDU hopes the underground not only serves as a new and exciting space for tourists; he hopes it unites the city and the neighborhood, as well.

“We want somebody halfway around the world to learn about it and say, ‘Hey, I want to visit that.’ But we also want people in the city to be coming for various things — whether it’s an exhibit or a gallery talk or a theater performance or something.”