It can withstand extreme temperatures. It can write for a mile. Meet the government’s favorite pen

The Skilcraft-branded pens have been produced specifically for the government for the past 50 years. They’re well-stocked at many local post offices and are many a military service member’s most trusted tool. It turns out there’s a pretty wild history behind the basic-looking ballpoint pen.
Listen now to WTOP News WTOP.com | Alexa | Google Home | WTOP App | 103.5 FM

WASHINGTON — The next time you’re at the post office, take a look at the pen you’re handed to sign for your package. Or if you work in a government office or at the Pentagon, crack open practically any desk drawer.

That slightly smaller-than-average pen, encased in a black tube, with the words “SKILCRAFT – U.S. GOVERNMENT” engraved across the side, may look like your basic ballpoint. But appearances can be deceiving.

First manufactured in the 1960s, according to highly detailed government and military specifications, the pen was designed to write without fail in office cubicles and war zones, alike. (An example of those specs: A single pen was required to be able to write a linear mile before needing an ink refill and had to be able to withstand extreme temperatures).

Skilcraft pens are notable for another reason. For the past 50 years, they have been produced by sight-impaired workers under an 80-year-old program dating to the New Deal to employ blind Americans.

“There is lots of history in this particular pen,” said Kevin Lynch, CEO of the National Industries for the Blind, the Alexandria, Virginia-based company that oversees production of the pen. The company recently marked 50 years since the first pens rolled off the production line. 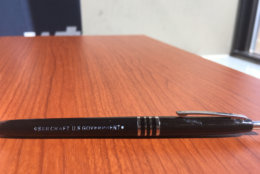 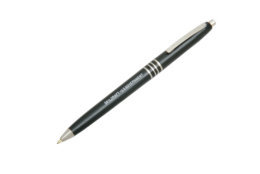 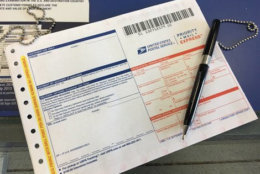 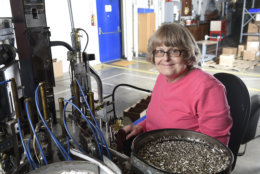 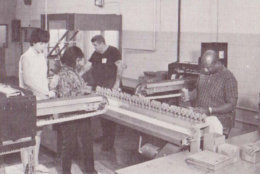 Over the years, the pens have also been the subject of some interesting bits of military folklore, according to Richard Oliver, the company’s director of community relations who works out of its Greensboro, North Carolina, manufacturing facility.

“We have vets come and tour our facility in Greensboro often,” he told WTOP. “And we come by the pen machines where we’re producing these pens and … they say: ‘I know that pen. I’ve used that pen. I’ve done lots of things with that pen.’”

Like what? Let’s just say the pens have been rumored to serve as emergency in-field medical equipment at times.

The Skilcraft pen was born in a bygone age, largely before the government bought commercial products to stock its office supply closets.

That meant reams of exacting government requirements: 16 pages’ worth, in fact, for the simple “standard-issue government pen.”

Here’s a look at some of those requirements, according to the company:

“I think it was very important that the pen be able to perform,” Lynch said.

The company said the pens have been used in every U.S. conflict since Vietnam.

As the government began buying more commercial products over the years, the military-grade requirements mostly fell by the wayside. But the company says the instantly recognizable pens are still largely made the same as they were half a century ago.

“I’ve actually run across people all the time that are vets and they have been out of the military for 20 years and they … say, ‘I used that pen,’” Oliver said. “‘That was my favorite pen. I could throw it in the desk drawer and two years later pull it out and it would continue to write.’”

And do other things, apparently. Here’s some of the lore the company has gathered about the pen over its 50-year history:

The pens proved so popular, the Armed Forces Radio and Television Service took to running satirical public service announcements (preserved on YouTube) calling the government pen a “endangered species” and nudging service members to leave the pens in their office desk drawers and stop taking them home to “to keep this vital piece of military equipment from vanishing forever.”

Famed for their no-frills exterior and satisfying clickability, in recent years, the pens have begun to gather fans outside the cloistered halls of government. They’ve inspired YouTube videos, adoring Pinterest pages, Twitter shout-outs — and even acted as muse to the poets.

“I imagine them on the desks of/ millions of government employees,” a musician and radio host  wrote in a 2013 poem called simply “Skilcraft Pens”:

keeping track, ordering, remitting
running the daily business of the country
before computers replaced the need
for a pen and sheets of carbon paper
before every form looked the same

What explains the appeal of this humble pen?

“I think it brings back memories for people, quite frankly,” Oliver said.

And, according to pen fanatics, they write well and are inexpensive.

Each year, several dozen workers crank out about 8 million pens, Lynch said. The pens are sold to the government under the AbilityOne program, which helps ensure some federal contracting dollars go toward companies that employ the disabled.

You can score your own box, too. The pens retail for $6.87 a dozen — about 57 cents per pen —  on the AbilityOne website. While the site is primarily geared toward government buyers, private citizens who create a login can make purchases, too, Lynch assured.

Beyond the nostalgia factor and their newfound internet fame, the pens remain a source of pride for the workers who produce them.

The unemployment rate for working-age blind Americans is about 70 percent.

Overall, National Industries for the Blind and the various nonprofits that fall under its umbrella employs more than 5,600 people across the country. In addition to the “government pen,” the company makes scores of other types of pens and other office supplies, such as folders, calendars, dry-erase boards and staplers.

“People who work on this pen have created a career,” Oliver said. “They’ve bought homes. They’ve put their kids through college. They’ve lived that American dream and their job has been to proudly make this pen for our federal government, our people in military.”

DRAIN Act would move non-security agencies out of Washington