The Fog of Espionage, Part 2: A day in the life of an American agent abroad

The details of the operation in this story have never been publicly revealed before.

If you call him a former spy, Mark Kelton will immediately correct you.

At the CIA, where he worked, the term is case officer, operations officer or handler. “A spy is the person, almost invariably a foreigner, with whom a case officer … works,” Kelton told WTOP.

Kelton worked at the CIA for 34 years, retiring in 2015. Most of his career was under cover; he’s only able to discuss certain parts of his life at the time. Asked what a typical day was like, he said, “It could be very stressful.”

Much of the work Kelton did remains classified, but he was granted permission by the CIA to share limited details of an extraordinary operation that took place during a day that he’ll only describe as “a cold, spring day behind the Iron Curtain in the mid-1980s.”

It was, to use his words, very stressful.

Putting down a drop

“Sometimes even the best planning is not enough,” Kelton began, alluding to the fragile security scenario that American agents had to put up with in Eastern Europe during the period.

His task that day was to put down a drop — a package for an agent. “This is classic stuff,” Kelton said. “You see it in the movies all the time. The package contained instructions, espionage material, money and the like for an agent, a foreigner working for us.”

Such an activity, he said, could sometimes take months before the agent actually attempted the operation. This one took several weeks.

“The problem was, there were people observing me and the activities of others at the embassy where I was working,” Kelton said. “It took me quite a while to get into a situation where I thought I was free of the people following me, or surveilling me.”

He spent an entire day, essentially, on what’s known in intelligence circles as a “surveillance detection run” — a route designed to erode surveillance (wear followers down by taking a long, circuitous route) without those doing the surveillance realizing it.

After ensuring he wasn’t being followed, he drove toward the spot where he was going to put down the package — a place that had been carefully chosen, that he and the agent knew of.

Kelton parked his car, took out the package and started walking to the site, “thinking there was no one following me.”

Kelton had numerous heart-pounding moments in his career, when he was afraid he was going to be caught by Soviet intelligence. This day was another one.

“I’ll never forget this — as I emerged from a tree line, I looked up to my right and saw a car in a parking lot maybe 200 meters away and saw a guy leaning over the car looking at me with binoculars,” he said.

With his mind racing, Kelton remembered what his training had taught him — to stay mindful of every moving thing around him. What he saw was not good: The guy leaning over the car looking at him was not alone.

“Pretty soon, lots of … his friends appeared and started following me,” Kelton said.

In a matter of seconds, surveying his surroundings, he determined there was a growing mob closing in on him. He made his move to escape.

His car was the best chance he had of shaking them off. But he was nowhere near it. He started to think about alternative escape options.

In that critical moment, in addition to hastily assessing his options for escaping, he was slapped squarely in the face with the reality of what would happen if he didn’t.

If they detained me, it could’ve resulted in the compromise of the operation, arrest and possibly the death of the agent.

“They knew I was operational,” he said. They possibly knew where he came from and who he worked for and were anxious to apprehend him. That would spell disaster. “I was carrying a package and if they detained me, it could’ve resulted in the compromise of the operation, arrest and possibly the death of the agent,” Kelton said.

Recognizing that his options were fading swiftly, “I quickly decided to beat a retreat and returned back to the embassy with the package.”

He ditched the idea of trying to get to the car and headed back to the embassy on foot. But the retreat — a race against the pack that had now grown to more than a dozen pursuers — turned into a mini-marathon.

Over the next 60 minutes, he briskly walked, ducked, dodged, bobbed and weaved through the streets of the city that, more than 30 years later, he’s still not able to specify because it’s classified, trying to elude the men on his heels.

All the while, stuck in his head, was the thought that he could not be caught. Because if he did, someone was probably going to die.

After reaching the relative safety of the embassy, the danger still wasn’t over.

How much did they know?

There was still the looming question — how much did his pursuers know? “Was it a mistake,” he asked himself at the time, to attempt the drop?

Decades later, during the interview with WTOP, he admitted, “I certainly didn’t know they were there. You always learn most from mistakes. But for me, that was a hard lesson learned.”

This story was an example of the high level of stress that American agents experience on a daily basis, due to the demands of the work. Kelton and others told WTOP that the multilayered lives of undercover spies means running a constant narrative in their minds, in order to make sure they always live the legend or aliases they are operating under.

In addition to being constantly followed by Soviet security, Kelton said, American spy handlers operating behind the Iron Curtain constantly had to worry about being recognized at border crossings or on streets by someone who might know them by a different name.

To his relief, he later learned that he had not been followed from the beginning of the operation that day — only at the end, when he was parking his car. The operation was aborted, but the agent wasn’t harmed.

“Those kinds of unexpected events can happen,” Kelton said. “They are the kinds of things that you learn a lot of lessons from, one of which is great respect for the adversaries that are trying to catch you.” 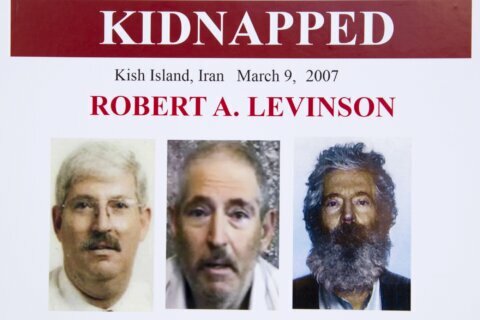