James Clapper has a lot of things on his mind, none of which can be solved easily. In this exclusive sit-down, the National Intelligence Director describes what he endures.
Listen now to WTOP News WTOP.com | Alexa | Google Home | WTOP App | 103.5 FM
download audio
ISIL is not a mortal enemy to the U.S. (James Clapper, National Intelligence Director)

WASHINGTON — Look carefully at the photo above of National Intelligence Director James Clapper. On his desk is a small red item, appearing near the bottom of the frame.

It’s an “Easy Button,” a toy made popular by an office supply company, symbolizing the ease with which it can solve client needs.

“In my five and a half years in this job, I’ve never had an occasion to use it,” Clapper said.

On a daily basis, the stream of complex life-and-death issues flooding the U.S. intelligence community has increased dramatically since Clapper assumed leadership Aug. 9, 2010.

While terrorism is a progressively worsening threat, Clapper said the U.S. intelligence community must remember there are other much more potent threats.

What he said next was surprising, yet practical.

“When you’re assessing adversaries,” he continued, “two dimensions are important — capability and intent.” Clapper says the group has “a very malign intent” toward the west and the U.S., though at this point, ISIL doesn’t have Russia’s destructive power.

The actual number of deployed Russian warheads could be higher — up to 1,900 operational warheads, the NTI data show.

Russia’s nuclear capability, if they chose to unleash it, “could render great harm to this country,” Clapper said. “But we don’t believe they have the intent to do that.”

Still, while avoiding the suggestion that Russia might be planning to target the U.S., Clapper says that country “has embarked on a very impressive campaign to modernize its military in all its dimensions.

“That is a bother,” Clapper said. “That’s a worry — something we need to be concerned with.”

On any given day, the Office of the Director of National Intelligence is consumed with developments involving cyber, espionage, terrorism, weapons of mass destruction, transnational organized crime and much more.

More than 100,000 intelligence community employees around the world are gathering, analyzing and disseminating intelligence about threats facing the nation. Their goal is to integrate foreign, military and domestic intelligence to defend the U.S. homeland and interests abroad.

The Islamic State still caught the world by surprise. It rose quickly and seemingly out of nowhere — killing, raping and enslaving, claiming to be the savior of Muslims.

The group represents a new phase of terrorism — one based in deep-seated differences and economic stresses. This isn’t a flash in the pan.

“If it’s not [ISIL], it’ll be something else like it,” Clapper said.

He believes the terror group will be defeated, but says what comes next could be worse. Clapper suggested it’s not a good idea to focus on one adversary and not watch the others.

ISIL’s rise shocked the world in 2014. That same year, Clapper flew to North Korea and facilitated the release of Americans Kenneth Bae and Matthew Todd Miller.

Threats of the future

So far in 2016, more than 1,000 people have been killed in roughly 100 terror attacks. Thousands more have been injured. Recently, an FBI intelligence official told WTOP that the U.S. is always high on the list of terror targets.

In the coming weeks, when Clapper speaks to Congress about potential threats to the nation, he’ll likely be asked where the U.S. stands and which threat is the most dangerous.

“I don’t rank them in my own mind — any of these concerns that we talk about, whether transnational or regional,” Clapper told WTOP. “They’re all concerns of ours. And you have to start someplace. There’s way too much importance attached to the marching order, because in my business, any of them could be this at any time.”

Through it all, Clapper said, it’s essential to be prepared.

That preparation is reflected in the photograph. Clapper has spent more than 50 years collecting the trail of breadcrumbs left behind by the nation’s adversaries.

But he’s left his own mark in the past five years. On Clapper’s desk is also a jar of paper clips, given to him by President Barack Obama, along with a joke told in April during ODNI’s 10th-anniversary celebration.

“I will say that the only flaw, generally, in what’s called the [Presidential Daily Brief] that I receive is that when Jim provides it … he leaves paper clips all over my office,” Obama said at the time.

“They’re in the couch, they’re on the floor. He’s shuffling paper. And so because I knew I was coming over here, one of the things I did was return them all.”

“Jim always gives it to me straight,” Obama said at the ceremony. “He gives me his honest assessment — free of politics, free of spin. I trust his integrity. And I can’t tell you how invaluable that is in the job that he has.” 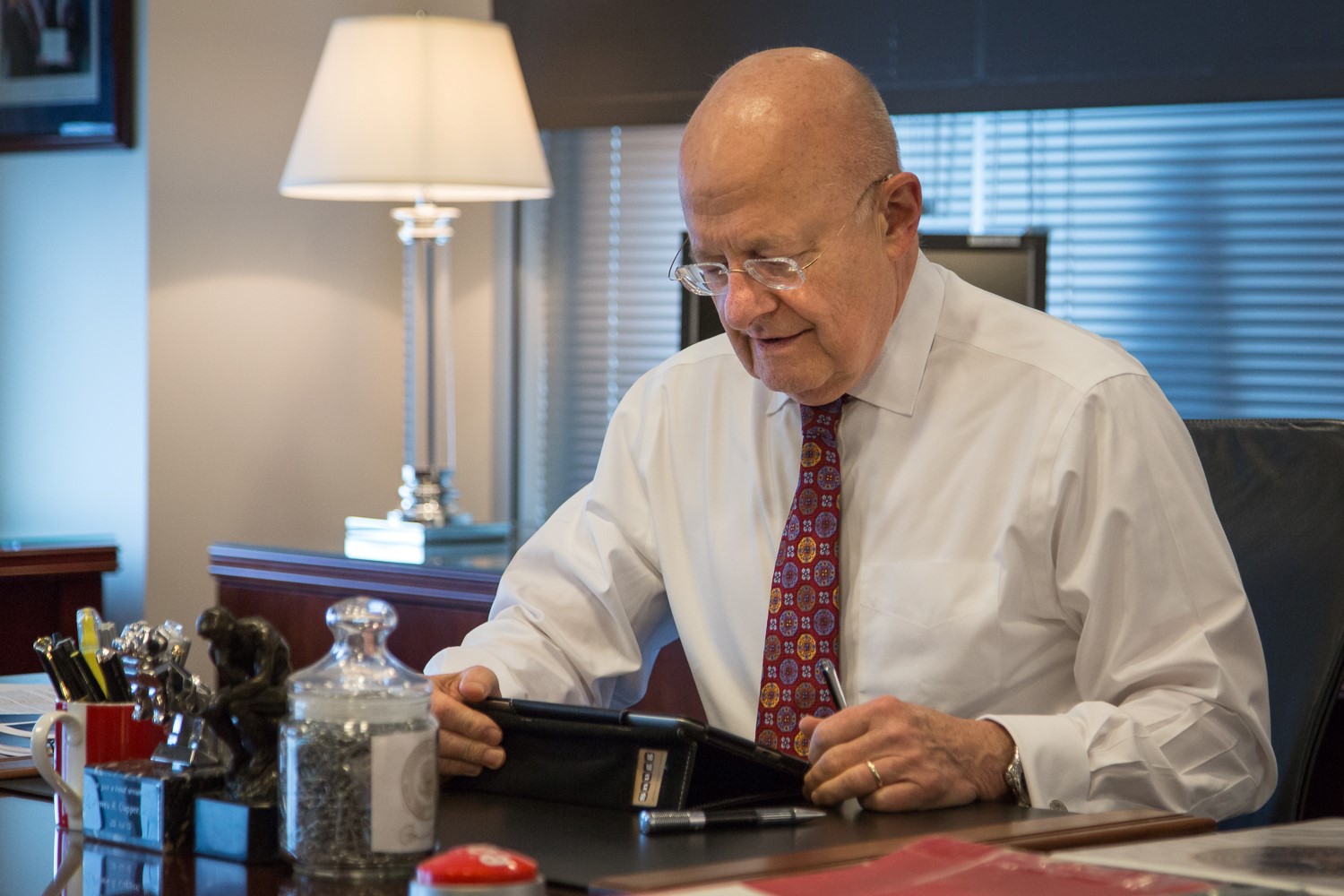 What keeps DNI Chief Jim Clapper up at night?

The Hunt: The role of women in extremist activity