Biden’s inauguration goes off with no security issues

The inauguration of President-elect Joe Biden will take place in a Washington on edge, after the deadly riot at the U.S. Capitol unleashed a wave of fear and unmatched security concerns.
Listen now to WTOP News WTOP.com | Alexa | Google Home | WTOP App | 103.5 FM
(1/10) 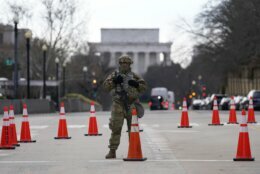 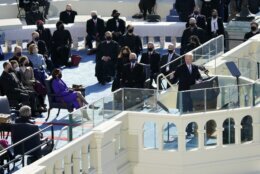 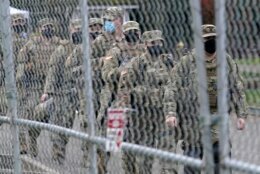 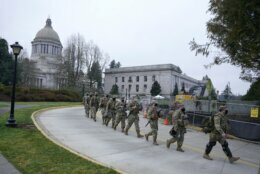 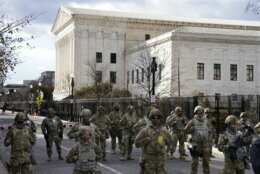 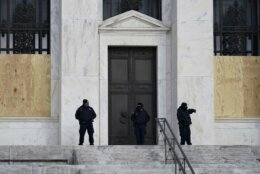 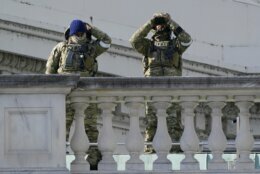 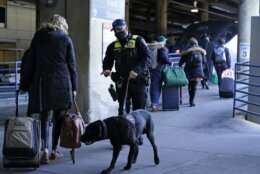 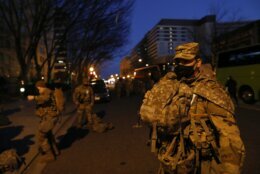 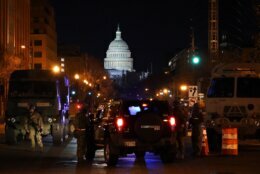 WASHINGTON (AP) — Troops in riot gear lined the streets of the nation’s capitol, but there were no crowds. Armored vehicles and concrete barriers blocked the empty streets around the U.S. Capitol. From behind miles of fencing, Joe Biden was safely sworn in as president in a Washington on edge, two weeks after pro-Trump rioters besieged the U.S. Capitol.

Law enforcement officials contended not only with the potential for outside threats but also with rising concerns about an insider attack. Officials were monitoring members of far-right extremist and militia groups, increasingly concerned about the possibility such groups could stream into Washington and spark violent confrontations, a law enforcement official said.

There were a few scattered arrests, but no serious disruptions in the city during Biden’s inauguration ceremony.

As Biden put it in his address: “Just days after a riotous mob thought they could use violence to silence the will of the people, to stop the work of our democracy, to drive us from this sacred ground, it did not happen. It will never happen. Not today. Not tomorrow, not ever, not ever.”

After the deadly attack that killed five on Jan. 6, the U.S. Secret Service stepped up security for the inauguration early, essentially locking down the nation’s capital. More than 25,000 troops and police were called to duty. The National Mall was closed. Checkpoints were set up at intersections.

In the hours before the event, federal agents were monitoring “concerning online chatter,” which included an array of threats against elected officials and discussions about ways to infiltrate the inauguration, the official said.

In right-wing online chat groups, members who believe in the QAnon conspiracy theory expressed disappointment that their long belief in the unfounded conspiracy that top Democrats would be arrested for a sex trafficking ring and that Trump could seize a second term did not materialize.

And 12 National Guard members were removed from the security operation a day earlier after vetting by the FBI, including two who had made extremist statements in posts or texts about Wednesday’s event. Pentagon officials wouldn’t give details on the statements. The FBI vetted all 25,000 members in an extraordinary security effort in part over the presence of some ex-military in the riot.

Two other U.S. officials told The Associated Press that all 12 were found to have ties with right-wing militia groups or to have posted extremist views online. The officials, a senior intelligence official and an Army official briefed on the matter, did not say which fringe groups the Guard members belonged to or what unit they served in. The officials told the AP they had all been removed because of “security liabilities.”

The officials were not authorized to speak publicly and spoke on condition of anonymity.

Investigators in Washington were particularly worried that members of right-wing extremist groups and militias, like the Oath Keepers and Three Percenters, would descend on Washington to spark violence, the law enforcement officials said. Some of the extremist groups are known to recruit former military personnel and train extensively and have frequented anti-government and political protests.

In addition to the thousands of National Guard troops, hundreds of law enforcement officers from agencies around the country were also brought into Washington. The increased security is likely to remain in the nation’s capital for at least a few more days.