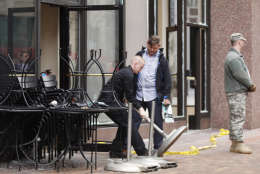 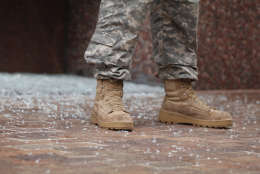 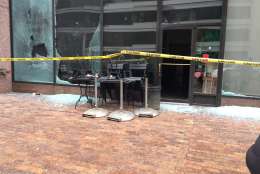 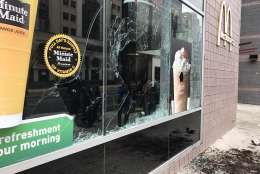 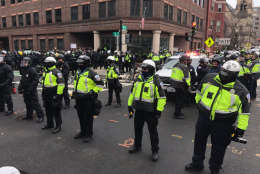 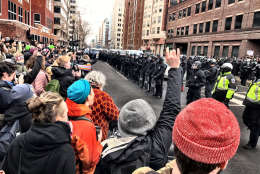 WASHINGTON — Protesters halted traffic on a major highway, set a car on fire, threw rocks at police and swarmed streets a few blocks from the White House as Donald Trump’s supporters celebrated his presidential inauguration on Friday.

A total of 217 people were arrested after violence broke out just before Trump was to be sworn in as the 45th president of the United States. They were charged with rioting and will appear in court Saturday morning, said Interim D.C. Police Chief Peter Newsham.

“We welcome visitors to our city. But we will not tolerate the destruction of our neighborhoods and we absolutely will not tolerate violence against our police officers,” Mayor Muriel Bowser said in an evening press briefing.

Newsham said the protesters threw rocks and bricks at police. Six D.C. police officers were injured during the altercations, including three who suffered minor head injuries from flying objects.

A group of about 400 to 500 people descended around Franklin Square about 10:30 a.m. Many of the protesters were armed with crowbars and hammers, which they used to break store windows and damage vehicles. They set several small fires and scuffled with police as they were arrested, Newsham said.

He called it a coordinated attack by an organized group from outside D.C.

“We had thousands of people that came to Washington D.C. to peacefully demonstrate. Unfortunately we had a small group that wanted to disrupt the inauguration,” Newsham said. “We have significant damage in a number of blocks in our city.”

An older man was taken away in an ambulance with a head injury, Newsham said.

“Some protesters started picking (concrete) up and started throwing it,” one eyewitness told WTOP.

“This is dumb. It really is. What did they accomplish?” said another. “Me, you — anyone could have been sitting there. … In America, this type of action doesn’t help.”

The demonstrations and tension continued through Trump’s inaugural luncheon and as he paraded down Pennsylvania Avenue with his wife Melania and son Barron.

Demonstrators halted westbound traffic on the Southeast Southwest Freeway for 30 minutes as they marched along the highway starting about 1 p.m. They carried signs that said “No hope” and “Stop fascism.”

Their route took them from near the 11th Street Bridge to the 12th Street Expressway to access Independence Avenue. The freeway was one of the few main roads that remained open during the inaugural events

But the epicenter of the tension was the Franklin Square area where a crowd of protesters continued to test riot police throughout the afternoon. Police formed a blockade across the intersection of L and 12th streets and fired off repeated rounds of pepper spray in an effort to disperse the volatile crowd.

Several groups of protesters combined in the area of the square and at first sought the release of those who had been arrested. But the tension escalated as protesters set trash on fire, and other protesters began to pry up bricks from a median. Protesters broke out the windows of a stretch limo parked on K Street, posed for photos amid the damage and later set the limo on fire.

At one point, scores of protesters armed with Black Lives Matter signs and anti-Trump posters moved down 12th Street and Massachusetts Avenue, swarming around cars caught in the unexpected melee.

A few blocks away, speakers addressed a more relaxed, and peaceful crowd at a McPherson Square opposition rally. Filmmaker Michael Moore was among those who spoke.

At its height, thousands packed into the square as National Guard troops and police stood watch.

Two groups obtained permits for marches and protests that involved the square.

The group DisruptJ20 had planned to protest at Columbus Circle outside of Union Station and then march to McPherson Square. Occupy Inauguration planned to rally at Meridian Hill Park before marching down to join up with the DisruptJ20 group. Black Lives Matter and other groups also took part.