A few days before inauguration, a group of asylum lawyers, academics, mental health professionals and nonprofit organizations held a Refugee Ball to show solidarity with members of refugee and immigrant communities, and to educate the public about contributions these communities make to society.
Listen now to WTOP News WTOP.com | Alexa | Google Home | WTOP App | 103.5 FM
(1/4) 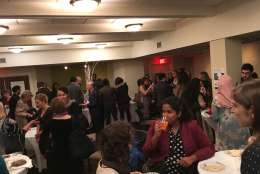 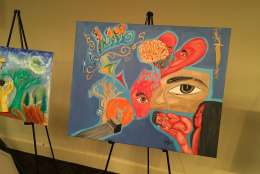 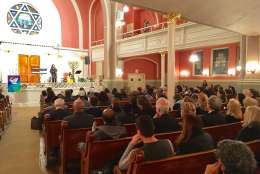 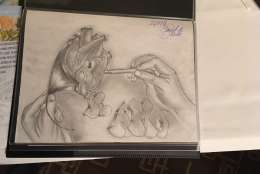 WASHINGTON — After a contentious 2016 election cycle and Donald J. Trump’s victorious White House bid, throngs will soon pour into the city to celebrate, and some to protest, his inauguration as the nation’s 45th president.

A variety of parties and balls are scheduled in the D.C. area during inaugural week, from the local DeploraBall Gala after the inauguration to the sold-out cocktail party of the same name scheduled the night before the President-elect officially takes office. Tickets to the Busboys and Poets 2017 Peace Ball are also sold out.

But a few days before inauguration, a group of asylum lawyers, academics, mental health professionals and nonprofit organizations held a Refugee Ball.

Organizers were neither intending to make a political statement nor trying to besmirch the incoming administration. Their goal was to show solidarity with members of refugee and immigrant communities, and to educate the public about contributions these communities make to society.

Tickets to the Refugee Ball were free, but the response was so overwhelming that registration quickly filled up, including donation-based tickets. There was also a packed waiting list before organizers opened the event to more people.

“A good friend of mine who is seeking asylum here said [to] check this event out. It attracted me by the diversity, by the positive aspect to it,” said Kevin Lerner, of Reston, Virginia.

One attendee made her way to the ball to show support for the refugee community. She also hopes for a more united country.

“I feel like at this time in the country, we really need to band together and have a positive influence on one another and really just be supportive. This is my effort to do that,” said Mary Sellers.

Attendee Andrew Sadow said dialogue in the country is “poisonous toward refugees … the only way that we’re actually going to bridge that gap is by learning about other cultures, really getting to know these are people, not just statistics.”

“With the election and all the rhetoric around immigrants, there’s a lot of misinformation that was disseminated … and a lot of fear-mongering, said Loide Jorge, a local immigration attorney who also performed at the event. “It really concerned those of us in the immigrant and immigrant-advocate community, because there was a very different narrative that was being displayed on very large platforms that are, part and parcel, just not true. We wanted to create an atmosphere and a forum where we could not only educate the public on who exactly are the refugees and the asylum seekers in our communities, but also to celebrate them.

“So much of who they are is who America is.”

The list of performers and speakers included other immigration lawyers, immigrants, refugees, asylum seekers and supporters.

Jorge’s view into the world of refugees and immigrants extends beyond her work as an attorney. She’s also an immigrant who has been in the United States since she was three years old.

“So much of who I am was the gift that America provided for me,” she said, adding that her parents came to the United States for an opportunity to secure a better future for themselves and for their children. “And so I have a personal appreciation for it, as well as the people I represent every day,” she told WTOP in a previous interview.

The downstairs social hall was filled with guests, food and drink, including 734 Coffee, whose product a representative from the nonprofit Humanity Helping Sudan Project said is a way to help refugees.

“Our mission is, basically, to bring self-sustainability to refugees, economic empowerment. Through the coffee we’re able to do that,” says Elvis Hedji, Humanity Helping Sudan’s operation’s manager.

Across the room, Antonio, a refugee from Honduras, spoke to attendees about his paintings and the path that led him to become an artist. His series “Arte en Accion/Art in Action” reflects his healing process after an arduous journey to the United States as an unaccompanied minor, his time in detention and his spiritual awakening during that time. Antonio decided to start drawing while he was detained by Immigration and Customs Enforcement.

Through an interpreter, Antonio told WTOP he’s facing deportation, but he’s not worried about it because he has faith in God that he’ll stay in the United States because there’s nothing for him in his home country except death. Antonio said anyone who is an immigrant knows if they had all they needed in their home countries, they wouldn’t leave to struggle and be humiliated in another place.