WASHINGTON — Howard County officials say Ellicott City’s Main Street later this month will fully reopen to pedestrian traffic — a month and a half after flash flooding deluged the city’s historic downtown, causing millions in damage to local businesses and killing two motorists stranded in their cars.

In an announcement Friday, Howard County Executive Allan Kittleman said the county is also preparing a yearlong effort to study the historic July 31 flooding and to put in place a comprehensive planning process for rebuilding.

According to the latest plans, Ellicott City’s Main Street will reopen to pedestrians beginning at 5 p.m. Tuesday Sept. 20.

Main Street is still an active construction zone, and Kittleman said it’s unclear when vehicles will be allowed back in the area.

“I’ve made this appeal before, and I’ll make it again, please don’t come to Ellicott City just to gawk,” Kittleman said. “These folks are still putting back the pieces of their lives, and we need to show them some courtesy and respect for what they’re going through.”

The new studies ordered by the county will piece together exactly how the flooding occurred and will model the potential for similar floods in the future.

County officials will conduct “listen and learn sessions” with those affected by the flood to help come up with a list of proposed rebuilding projects, Kittlemand said.

“But people need to understand that not all projects will be feasible from an engineering or economic perspective,” Kittleman said. “And it’s unlikely that there will be funds to complete all projects, so ideas will have to be prioritized by the largest benefit to make Ellicott City a more resilient town.”

The entire process is expected to take a year, Kittleman said.

“That may seem like a long time, but we want to be thorough and comprehensive and we want to get the science in hand before we jump forward,” he said. “We want to do it right and avoid putting any more Band-Aids on this problem.”

In the immediate aftermath of the flooding, crews towed more than 200 damaged vehicles — some fished from the Patapsco River — and officials blocked off Main Street to the public over fears that some severely damaged buildings might collapse.

Kittleman’s announcement came the same day police said a man working on flood-related repairs behind a Main Street business fell from a scaffolding and died. 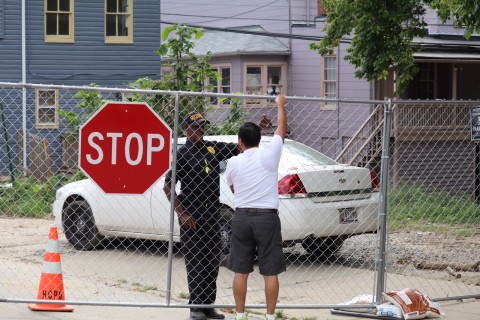