These horses, found on a property in Washington County, Maryland, had hooves so long that they looked like curled horns attached to the bottom of their legs.
Listen now to WTOP News WTOP.com | Alexa | Google Home | WTOP App | 103.5 FM
(1/10) 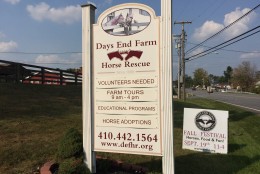 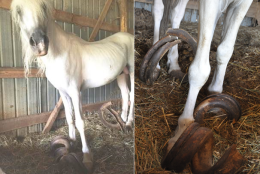 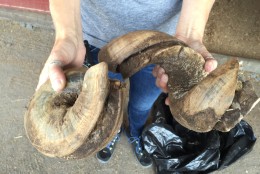 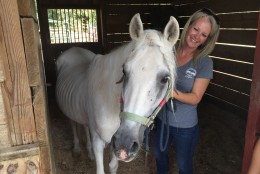 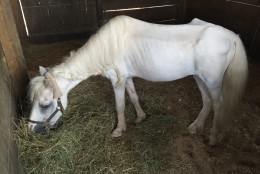 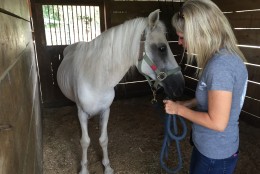 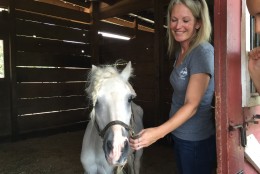 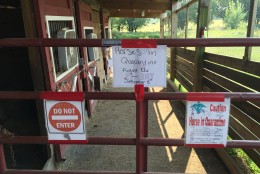 WASHINGTON — Two extremely neglected horses, that were likely kept locked up for at least a decade, were rescued last month and brought to a farm in Howard County, Maryland.

“We went out last Thursday to evaluate the horses’ conditions, and what we found were nothing short of the most severe hoof neglect that we have ever seen in our 26 year history,” DeEtte Gorrie, Equine Programs Director at Days End Farm Horse Rescue tells WTOP.

A horse’s hooves grow about a quarter of an inch a month, and need to be trimmed by a farrier every 6 to 8 weeks.

These horses, found on a property in Washington County, had hooves so long that they looked like curled horns attached to the bottom of their legs. They ranged in length from 25 to 36 inches.

“It is like you and I wearing high platform stilettos for 10 years.  How is that going to affect your tendons, your ligaments, your joints, your muscles?” asks Gorrie.

At the scene where the horses were found, investigators found 61 pieces of cut-off hoof growth in a bucket.

Initially three horses were found, but one had to be euthanized.

The two others are getting round-the-clock care at the farm in Woodbine, and both are willing to allow people near them.

“He has no external body fat, no internal body fat, and his body is now living off bone marrow fat to survive.  So he has 4 to 6 months … before he’s physically going to appear to be more healthy,” says Gorrie.

The other stallion, Quest, often whinnies at other horses.

Quest was found in an enclosure piled high with more than four feet of manure and hay.

“We had to dismantle the paneling that was there as a wall, and dig out a trench or a ramp from that material to get him out,” Gorrie says.

The horses, who also have big problems with parasites, are spending 14 days in quarantine away from the other 75 or so other horses at the facility.

The farm’s average cost of treating horses in critical need like these is $1,900-$2,400 a month, and the cost goes down once they’re in better shape.

Gorrie says she’s seeing positive signs from both animals, but they have a long road ahead.

“It’s not a rehabilitation that just takes a few weeks or a few months to improve.  Because of how a horse’s hoof is generated, it takes a full year for a horse to regenerate a whole new foot.”

Days End Farm Horse Rescue is a nonprofit that is always looking for donations, volunteers and people who are willing to adopt.

Fifteen charges of animal cruelty have been filed against Robert and Christine Baugher in connection with the rescued horses. There are four misdemeanor counts and one felony count for each horse.

A court date is set for Oct. 28 in District Court for Washington County. 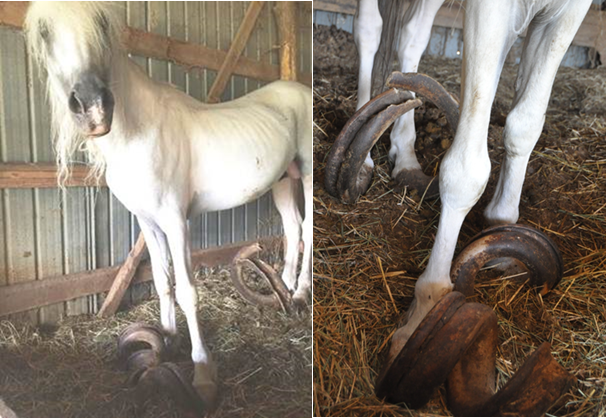