Holidays: Where to see holiday lights | 4 ways to limit your holiday debt | Inflation 'definitely a guest' at holiday celebrations this year | Recipes for Thanksgiving leftovers
Home » Holiday News » When is the perfect…

When is the perfect time to hang up Christmas lights?

A new survey of around 4,000 homeowners by House Method found that 14% of Americans hang their lights in November before Thanksgiving.
Listen now to WTOP News WTOP.com | Alexa | Google Home | WTOP App | 103.5 FM

Neighborhoods across the country will soon be decorated with Christmas lights now that Thanksgiving is over, but some homeowners have probably gotten a head start.

A new survey of around 4,000 homeowners by House Method found that 14% of Americans hang their lights in November before Thanksgiving, while 13% said the first day of December was the right time to do it.

“Early to mid-November is when most Americans plan on hanging up Christmas lights,” according to House Method, a website that offers advise for homeowners. “What’s interesting about this response is that it’s contrary to when most U.S. households would prefer to see Christmas lights, which is early-to-mid December.”

The figures suggest that most homeowners like to see homes lit up closer to the holidays, but will begin to make preparations beforehand.

“Practically speaking, this makes sense, as many homeowners are extremely busy throughout December,” House Method said. “Between holiday get-togethers and Christmas shopping, many American households have little time for decorating.”

There are apparently some pretty serious procrastinators out there, as 2.8% of those surveyed said they planned to put up their lights up on Christmas Day itself.

“I don’t know about you but I don’t think my wife would let me get away with that if I said we were going to wait until Dec. 25,” said David Cusick, a researcher with House Method. “I can’t imagine trying to do coffee, presents and hang Christmas lights.”

When people were asked whether they planned to leave their Christmas lights up all year-round, 12% said yes.

There was disagreement between Maryland and Virginia when people were asked the question, “what’s the earliest day you should display Christmas lights?” 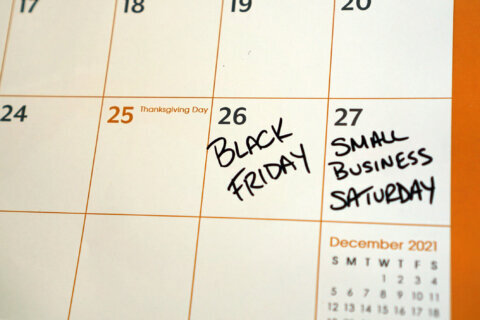 Small Business Saturday 2022: Your guide for ‘shopping small’ around DC