Deadly skin cancer can appear anywhere on the body, even where the sun doesn’t shine

Melanoma is the most common and deadly form of skin cancer in the U.S. On what dermatologists call Melanoma Monday, a twice-diagnosed survivor has a message.
Listen now to WTOP News WTOP.com | Alexa | Google Home | WTOP App | 103.5 FM
(1/5) 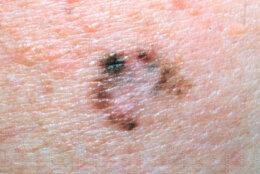 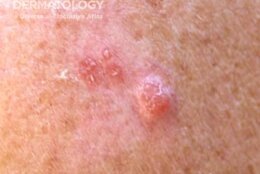 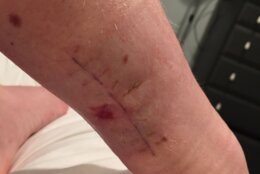 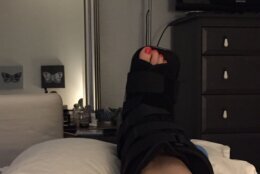 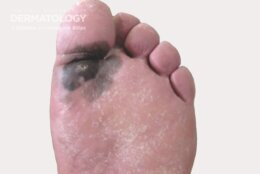 Melanoma is a common and extremely deadly form of skin cancer. On what dermatologists call Melanoma Monday, a twice-diagnosed survivor has a message.

“Anybody can get melanoma; anybody can get skin cancer. Bob Marley died from melanoma,” said 34-year-old Liz Hazuka of Reston, Virginia.

Hazuka has fair skin, red hair and freckles. Her first bout with melanoma occurred when she was 25 years old, It was found during a routine check at the dermatologist’s office.

“Luckily, I found it early,” she said. “My first one was a little bit invasive. It was a stage 1A. Luckily, I just needed a wide local excision. There was just a surgery. So, I have about a 4-inch scar on my right calf.”

Hazuka’s second melanoma was caught even earlier. She said the experience of having to mitigate the cancer has changed her life.

“I never go in the sun without sunscreen and long sleeves. I really avoid the sun in the midday peak; my beach days, going there all day, are behind me,” she said.

Hazuka said she became so passionate about helping people avoid being late diagnosed with melanoma that she changed career paths and is now studying to become a physician assistant.

“I have a year-and-a-half left to go. And I hope to one day be working in dermatology,” she said.

Hazuka said she worries about people who might be putting themselves at risk unnecessarily.

“I think especially for young women. There’s this pressure to look a certain way, and to go out tanning, go into a tanning booth or lay out in the sun all day. But not only can it increase your risk of skin cancer, but it also ages your skin a lot faster,” she said.

Exposure to ultraviolet rays can prompt all forms of skin cancer. But there are certain types of cancer that are more related to genetics and family history.

While Hazuka’s stage 1A cancer was on the back of her calf, a D.C. dermatologist said that skin cancer can appear anywhere on the body.

“This can include the palms and soles. Even where the sun literally doesn’t shine in the groin or by the buttocks,” said Dr. Adam Friedman, professor and chair of dermatology at The George Washington University School of Medicine and Health Sciences.

Although extremely rare, melanoma also can present under the bed of a fingernail, Friedman said. The melanoma that killed Reggae icon Bob Marley first appeared as a dark spot under his toe nail.

“This can appear as a growing, long black streak on the nail that can change over time,” Friedman said. “There’s some evidence that getting UV radiation exposure at the manicurist can actually increase the risk for this type of skin cancer.”

Both Friedman and Hazuka emphasize the importance of regular professional skin checks and being familiar with changes occurring on your body.

“I tell all my patients to check themselves out at least once a month, or every other month, to look for new growths or spots, or spots that are changing over time,” Friedman said. “It’s that evolution over time that really indicates something might be off and would warrant getting checked out by a board certified dermatologist.”

Some of the changes could be in size or shape of a spot; the border could go from being really well cut off to kind of smudgy; changes in color might be it becoming more pronounced or fading to become more pale. All are indications something’s wrong.

“Waiting is not going to make it go away,” Hazuka said “If you ever see anything new or changing, or something just doesn’t feel right, go in and get it looked at.”

A person dies of melanoma almost every hour in the U.S. But if it’s caught early, there’s a 95% cure rate by just cutting it out, Friedman said.

“So, the most important thing is catching it early,” Friedman emphasized. “Early detection saves lives.”