A Texas family spending time at the National Institutes of Health campus in Bethesda, Maryland, is thankful for a daughter’s second chance at life.

Jason and Katie Ballard, daughter Emi, and son Maxx Frick are extra grateful to spend time together as they celebrated 13-year-old Emi’s path to beating a rare, deadly disease.

“She has a disease called DOCK8 immunodeficiency syndrome, or I guess I should say did have because a bone-marrow transplant for her is a cure.”

Most people with DOCK8 deficiency do not live past their early 20s or 30s.

Before Emi was diagnosed, her birth mother and the Ballards learned she had a serious immune deficiency. They did not know what type, but they knew Emi needed to stay in the United States for constant treatment in order to live.

Emi is originally from Belize, and her birth mother had a tough choice. Katie said Emi’s mother asked her and her husband, Jason, if they would love Emi like their own and whether they were willing to adopt Emi.

“For us, we really felt like it was something that God had called and put on our hearts — literally — put a baby on our doorstep,” Katie said.

Their answer was yes, and the Longview, Texas, family grew by one member when Emi was 2-years-old.

It was years before they found out the name of Emi’s disease. Once Emi’s doctors in Dallas notified the family of the DOCK8 deficiency diagnosis in June 2018, they insisted she be treated at the National Institutes of Health, where the cause of DOCK8 deficiency had been discovered in 2009.

They also learned patients had been cured through stem cell transplants.

“With the word cure, we had hope,” Katie said.

The journey had its highs and lows.

The Ballards wondered if they would find needed stem cells after a registry search for donors did not yield any matches. 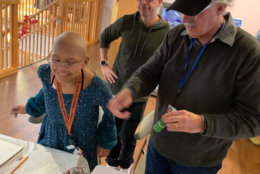 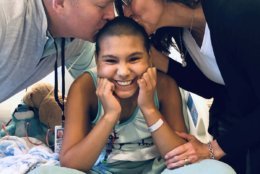 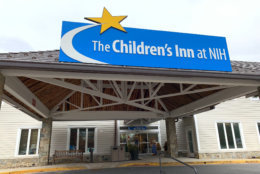 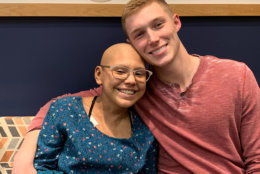 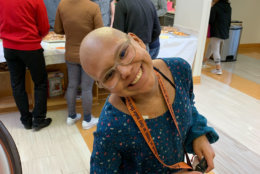 Then, Emi’s birth parents and brother were tested in Belize and her birth mother’s cells were a half-match — and the chance for a cure.

Then, there was the period right after the transplant when Emi got a virus.

“That whole time, there was a worry. I was in those low-lows. It’s more than just Emi going through it medically — because our family is separated. We’re in three different places most times,” Jason said.

In the past several months since Emi and Katie have been at NIH, Jason has remained in Texas. Meanwhile, their son Maxx has been away at college.

But Maxx said things are getting better.

“She’s smiling; she’s over here trying to mess with me during this interview, and so I think times can be difficult, but if you look at the holistic picture, that, you know, everything’s fine.”

They continue to celebrate Emi’s new birth and another chance at life. On Thursday, they celebrated Thanksgiving with a turkey cooked in an oil-less fryer that they brought from Texas.

Even though there is a lingering concern that Emi’s body may reject the donor cells, Katie is thankful for the “incredible science here that tells them what they need to do.”

“We are on the upswing of the highest of highs, but even in those wonderful amazing days — today … it’s just been really cool to think where we even were last year,” Katie said when they were still waiting for a donor.

“Now — new Thanksgiving, we’re there. We’re on the back side of transplant and looking good,” she added.

When asked if she is also looking forward to bugging her brother — in full health — Emi responded with a resounding and definite, “Yes.”

Why get the HPV vaccine? ‘No one is immune from the potential for exposure’