On Saturday mornings, it's perfectly acceptable to lie down on the floor at the Kennedy Center.
Listen now to WTOP News WTOP.com | Alexa | Google Home | WTOP App | 103.5 FM
(1/6) 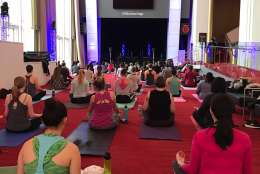 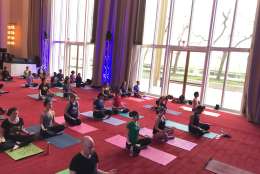 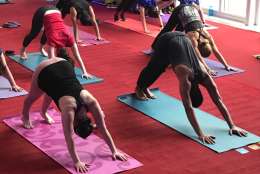 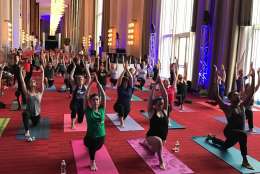 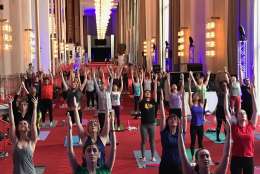 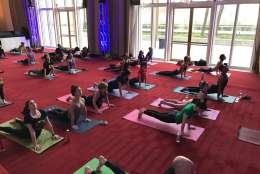 WASHINGTON — The iconic red carpet in the Grand Foyer of the Kennedy Center was covered Saturday morning with something other than dress shoes waiting around for a performance.

Roughly 100 yoga mats of all different colors were arranged under the hall’s crystal chandeliers, as barefoot yogis prepared for a traditional yoga class in a nontraditional space.

A ’90s playlist started up and the mostly under-40 crowd began stretching and bending to commands from D.C.-based yoga instructor Alia Khan.

Saturday’s class was one of 13 free yoga classes the Kennedy Center will host between March and August. The bi-weekly morning workouts are part of the center’s Sound Health initiative, a partnership with the National Institutes of Health that highlights the connection between performing arts and wellness.

Matthew Winer, director of special programming at the Kennedy Center, said the yoga classes also make use of an otherwise underutilized space — especially on weekend mornings.

“What better place to activate our living memorial to President Kennedy and welcome people here, and what better reason than to activate healthy living and encourage healthy lifestyles,” Winer said.

“It’s such a magical place. I love the theater, and the opportunity to teach in a space like this was — you certainly couldn’t walk away from that,” said Khan, owner of East Side Yoga in Capitol Hill.

A major draw for her was the Kennedy Center’s push for music to be a focus of the class. (Winer explained a secondary goal of the program is to inspire further research into links between music and the brain.)

Khan says music is a big part of her practice. She finds it helpful for both the student and the teacher, since music allows everyone to “unplug from the hamster wheel of the mind” and get in the moment.

“It’s like a moving meditation,” Khan said. “If I know somebody is mouthing the words or dancing along a little bit in their down-dog, I know I’ve succeeded.”

Winer said the hope is to continue the yoga series beyond Aug. 19 and to find new activities to offer to the community.

“The sky’s the limit. We’re dreaming it up right now,” Winer added.