Nature as treatment? Road to healing PTSD is Green

Can time among the pines treat PTSD? A local effort is underway to prove that nature may be the best medicine for wounded service members.
Listen now to WTOP News WTOP.com | Alexa | Google Home | WTOP App | 103.5 FM
(1/5) 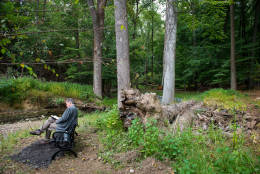 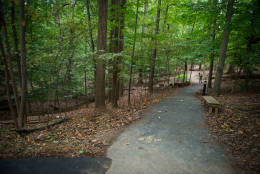 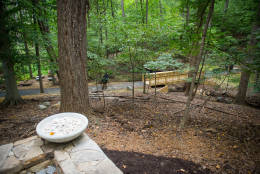 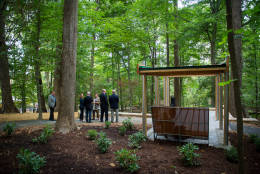 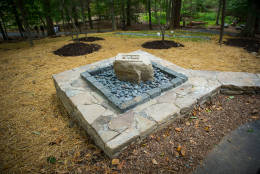 WASHINGTON — “My war is over. Battles are only memories … nightmares that I sweat out during the dark of the night. The woods is serenity, hope and intrinsic light, that pulls us deep inside so we can observe her beauty.”

Dr. Frederick Foote reads a few more lines from a leather-bound journal before closing the pages and returning it to the base of a bench, set within a wooded area on the Walter Reed National Military Medical Center campus.

The retired U.S. Navy neurologist and scholar at the Institute for Integrative Health has been at the forefront of modern medicine, working with wounded service members at the country’s flagship medical center, for more than 17 years.

But perched on a large rock overlooking a natural stream on the base in Bethesda, Maryland, he feels confident that he’s sitting on the next advancement in PTSD and veteran health care — literally.

“The idea is just being in nature all by itself will heal the body,” Foote explained. “We want to really test to see if wild nature does heal.”

On Sept. 26, the Institute for Integrative Health and its partners opened The Green Road Project at Naval Support Activity Center Bethesda. The 2-acre outdoor area, which took six years to come to fruition, is relatively simple: There’s an active stream, plenty of trees and a few man-made places to take it all in, including a communal pavilion, a commemorative pavilion and some benches equipped with journals.

Foote says the point of The Green Road Project is twofold. It’s a quiet escape where wounded warriors and their families can go to find peace and solace; it’s also a laboratory-of-sorts, where he and a handful of the nation’s leading researchers are studying nature’s impact on whole-body healing.

In the last several years, more physicians have been using complementary medicine — such as art therapy, acupuncture, yoga, nutrition and more — to rehabilitate wounded warriors. In fact, Foote estimates that about one-third of treatment hours are spent on alternative and holistic approaches.

Now, he’s hoping to show that even more treatment time can be dedicated to holistic medicine.

In a two-year study, currently underway at The Green Road with 50 service members suffering from catastrophic injuries, researchers are measuring nature’s medicinal effect using mathematics, combined with data from four biomarkers of the stress response.

“There’s a lot of data that nature is good for stress and for people under stress, but it tends to be localized effects, rather than the whole body-type-of-approach that we’re using here,” Foote said.

“But if we’re able to show that the whole body is undoubtedly influenced by exposure to nature in a positive way, that kind of proves it all, doesn’t it? I mean, that’s a game-changer for environmentalism as well as medicine.”

What is it about nature that helps the healing process?

“We have no idea,” Foote said.

However, his first priority is to confirm that it does work, before answering “why.” That way, the treatment approach can reach others — even beyond Bethesda — as soon as possible.

Despite the time it took to “build” The Green Road Project, there’s very little tampering with the natural environment — and that’s just what Foote and his colleagues intended.

He says water, stone, wood and animals are the most important “features” when it comes to reflection and rejuvenation. The benches, pavilions and journals are just meant to enhance the experience and aid in expression.

“You just provide the nature and the mind takes care of the rest,” Foote said. 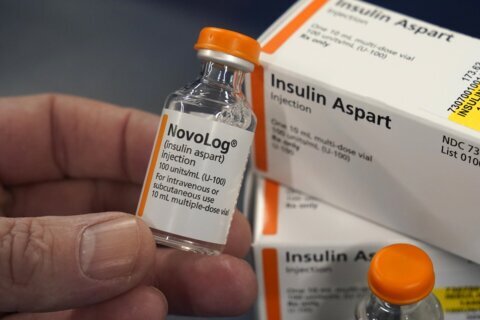