There are plenty of spooks, specters and spirits allegedly haunting Lafayette Square Park and multiple buildings surrounding the area. Is there any truth to the tales of ectoplasmic entities overstaying their welcome? WTOP's Will Vitka took to the late-night streets to find out.
Listen now to WTOP News WTOP.com | Alexa | Google Home | WTOP App | 103.5 FM
(1/22) 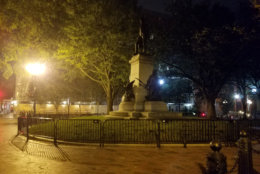 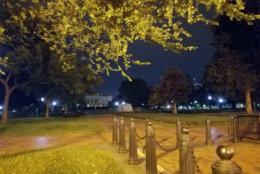 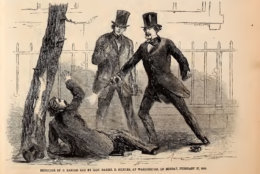 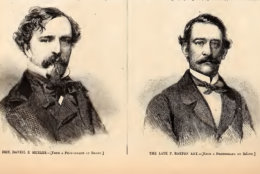 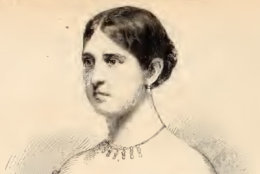 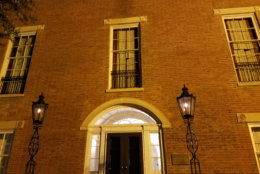 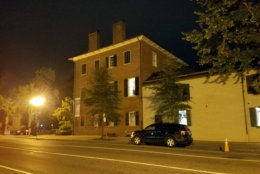 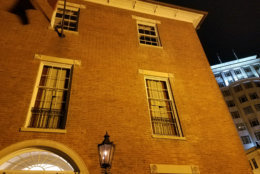 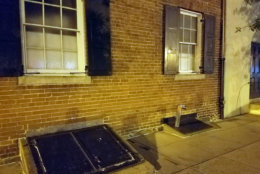 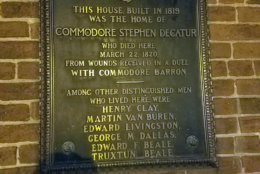 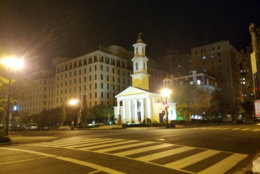 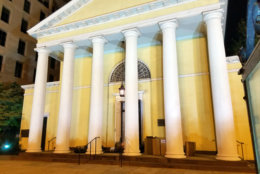 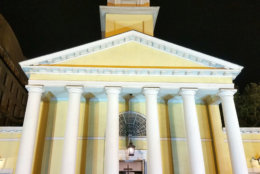 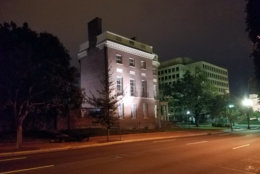 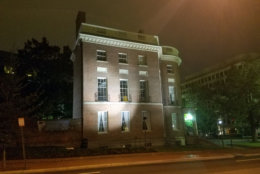 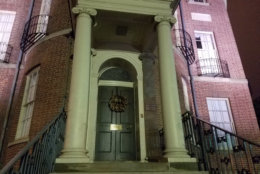 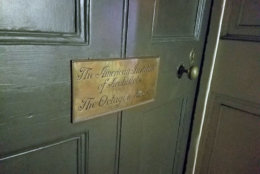 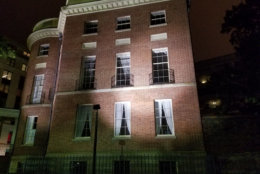 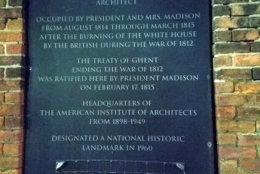 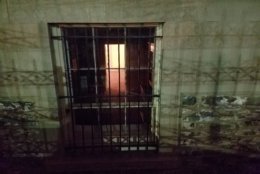 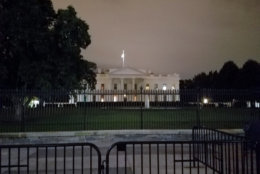 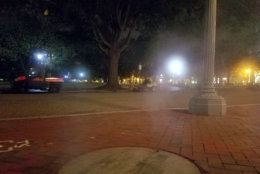 WASHINGTON — Of all the allegedly haunted locations in the District, Lafayette Square Park and the immediate area surrounding is like a supernatural stew. The buildings purported to be visited by otherworldly forces include the park itself, the Decatur House, the Hay-Adams Hotel, St. John’s Episcopal Church, the Cutts-Madison House and the nearby Octagon House.

All of which seem perfectly benign during daylight hours.

But do the ghosts come out at night? My wife, Reem, and I decided to take to the streets to find out. We received permission from the local authorities to hang out at the park and poke around a bit overnight recently.

Before we tell you what we found (or didn’t find, in some cases), a little history about each of the supposedly haunted places is in order.

In February of 1859, Philip Barton Key II, district attorney of the District — and son of Francis Scott Key, the man behind “The Star-Spangled Banner” — was gunned down by U.S. Rep. Daniel Sickles, D-NY, because of some hanky-panky between Key and Sickles’ young wife Teresa Bagioli Sickles.

(It should be noted that Daniel Sickles’ own extramarital adventures were well known.)

Sickles apparently saw Key signal to Teresa with a handkerchief as he crossed Lafayette Square Park (then President’s Park) near the Sickles’ home, grabbed a pistol, rushed out and shot an unarmed Key three times.

It’s said that Key pleaded for his life as he was shot.

He was rushed to the Benjamin Ogle Tayloe House nearby. Tayloe’s dad, Col. John Tayloe III, built the Octagon House, which we will get to a bit later.

Sickles was charged with murder but became the first in the U.S. to successfully use “temporary insanity” as a defense.

It gets stranger though.

Sickles went on to command a military disaster in Gettysburg where he went against orders, got his battalion destroyed and lost a leg from a cannonball shot.

Once the leg was amputated, he had it sent to the Army Medical Museum, including a note: “With the compliments of Major General D.E.S.”

The leg is still there today.

Key now allegedly haunts Lafayette Square between 15th and 16th streets, where he was shot.

Pistol duels seem like a real dumb thing to do. In fact, they were so dumb, and yet so common, that they led to a shortage of experienced American military officers. Seriously.

James Barron, another naval officer, challenged Decatur, a former subordinate of Barron’s, to a duel in the years following Barron’s court-martial.

The court-martial was a result of Barron’s behavior in 1807 during the Chesapeake-Leopard Affair off the coast of Norfolk, Virginia, which saw Barron forced to surrender his ship, the USS Chesapeake, to the British in the lead up to the War of 1812.

In purely technical terms, the British caught Barron with his pants down. Barron wasn’t at all prepared for a fight. Three crewmen were killed and 18 were injured when the British ship, HMS Leopard, opened fire.

Barron was suspended from the Navy for five years without pay. And Decatur bad-mouthed Barron.

Barron eventually had enough and, once he returned stateside and was reinstated, apparently figured that the correct solution to this 19th-century version of a Twitter rant was, y’know, for the two guys to try to murder each other with bullets.

Both men landed their flintlock-pistol shots. Only one survived.

Decatur died at his Lafayette Square home the following day.

About a year later, people claimed they saw his visage staring out the second-floor window, looking toward H Street NW and walking out of the house toting dueling pistols.

The appearances of the apparition allegedly got so bad that the windows were bricked up. Spooky!

The problem with that story is it’s simply not true. Most of the H Street-facing “windows” had always been bricked up as per the original design by architect Benjamin Henry Latrobe (who also designed St. John’s Episcopal Church, below), due to a complex system of fireplaces and flues.

One thing that did change was that the White House Historical Association added shutters to the side of the house circa 1944.

It is currently a museum and serves as the National Center for White House History.

“The Church of the Presidents” first opened its doors in 1816. It is the oldest building in Lafayette Square other than the White House.

Every sitting U.S. president since James Madison has attended services here at least once, hence the nickname.

It is said that when the church’s 1,000-pound bell — built in 1822 by Paul Revere’s son, Joseph Revere — tolls for a prominent person’s death, six figures clad in white robes appear in the president’s pew (pew 58) at midnight, then vanish.

Theoretically, these guys are paying their respects.

Hoo boy are there a lot of spirits supposedly scuttling around the Octagon House.

But let’s get one thing out of the way before we dive into that madness: The Octagon House is not an octagon.

Designed by architect Dr. William Thornton at the request of Col. John Tayloe III, it has six sides (see image) and was situated in such a way that the exterior walls were parallel to both 18th Street and New York Avenue, which shifts northeast at a funny angle.

Why it’s called the Octagon House is anybody’s guess.

Now, on to the creepiness.

Tayloe and his wife Anne were looking to build a town house, a sort of vacation home to compliment their Mount Airy, Virginia, estate.

The Tayloes were a family of extreme wealth and influence. Journalist, author and poet Mary Clemmer Ames wrote that Tayloe had something in the order of 500 slaves (an 1891 New York Times article refers to Tayloe as a “great slave baron“) and, of course, plenty of land in Virginia. None other than George Washington persuaded Tayloe to build his home in the newly established federal city of D.C. near Lafayette Square.

Washington, of course, wanted Tayloe’s money to be spent in the District.

The Octagon House was completed in 1799 and things allegedly started going all crazypants following John Tayloe III’s death in 1828.

Mary Clemmer Ames recalls a tale in her 1874 book “Ten Years in Washington” that the Octagon House “has long had the reputation of being haunted.”

She then quotes an unnamed source telling the tale of a skeptic invited over for dinner who witnesses the bells ringing by some unseen hand and, while investigating the cause, is lifted up from the floor.

Within the same quote, it is alleged that: rats were found to be the culprits; actually just kidding nobody ever found out; the family said “to heck with this” and took the bells down; a priest tried an exorcism but it didn’t work.

So, your mileage may very.

That 1891 New York Times article goes on to state that the house’s use as a slave market in the years before the Civil War led to “many horrors to the imaginations of a certain class of people, who love to believe that it is haunted.”

Marian Gouverneur’s 1911 book “As I Remember” features a similar story of spooky bell shenanigans, this time recalled to her by the daughters of General George D. Ramsay, a career officer with the U.S. Army. This was, again, during dinner with Tayloe:

“While the members of the family were at the evening meal, the bells in the house began to ring violently. General Ramsay immediately arose from the table to investigate, but failed to unravel the mystery. The butler, in a state of great alarm, rushed into the dining-room and declared that it was the work of an unseen hand. As they continued to ring, General Ramsay held the rope which controlled the bells, but, it is said, they were not silenced.”

The bells were indeed removed from the house at some point.

The only bell you can hear these days is the doorbell, which I rang while my wife and I were poking around the grounds.

Ringing the Octagon bell. (You can sorta hear it ringing inside) #haunteddc #willvitkalive @wtop pic.twitter.com/u6L4RkrNOv

You can hear the bell inside ring. But, on this night, no ghosts answered.

Not even the friendly Dolley Madison, who is said to float around the Octagon premises (in addition to several others) following her and husband James Madison’s stay at the house after the British burned down the White House in August 1814.

Col. Tayloe’s daughters didn’t answer either … though legend has it two of them haunt Octagon House.

Here’s how the stories go:

Dead daughter No. 1 (some time before the War of 1812): Col. Tayloe and one of his daughters were arguing on the second floor near the stairs because she had eloped with a British soldier stationed in D.C. When she turned to storm away, she fell and died. Now her specter appears as a crumpled body at the bottom of the stairs, a ghostly candle moving along the stairs or as a shape on the second floor landing.

Dead daughter No. 2 (some time around 1817): Col. Tayloe was again arguing with another one of his daughters on the third floor of the house after she eloped with a guy he didn’t approve of. Then, she also fell and died. Now her spirit haunts the third floor landing and the stairs between the second and third floors.

Man, Octagon House stairs sure are a doozy.

But here’s the problem with these legends: None of Tayloe’s kids actually died at Octagon House.

He had 15, seven of whom were born at Octagon House. Plenty of them lived there at various points in their lives, but none of them died there.

So are the hauntings true?

Lafayette Square: During our night out, Reem and I saw D.C. police and Secret Service — all of whom were great—but no ghosts. No sense of unease. No voices. It was very pleasant. The scariest thing to happen to us was some rats screeching at us from a sewer drain. Startling to be sure but, in fairness, we were on their turf and it was almost 5 a.m. by that point. Maybe they were sleepy.

Decatur House: No. At least, we saw no evidence of a haunting. The house doesn’t seem eerie or unsettling. There was no man in the windows. It’s quiet and peaceful and well taken care of by The National Trust for Historic Preservation and The White House Historical Association.

Octagon House: For what it’s worth, my wife did find the place exceedingly creepy. It does have the air of history about it, of being from another time. But we heard no noises or chains or bells or cries from phantoms. On the other hand, I am the guy who wandered up the front steps and kept jabbing the doorbell out of a morbid sense of comedy/curiosity, so perhaps I am not the most receiving vessel.

What I can tell you is that something unexplained did happen to my wife and I in Georgetown. Visit WTOP.com Monday, Oct. 29, for that story. 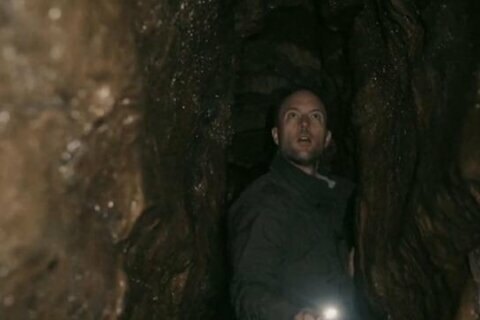 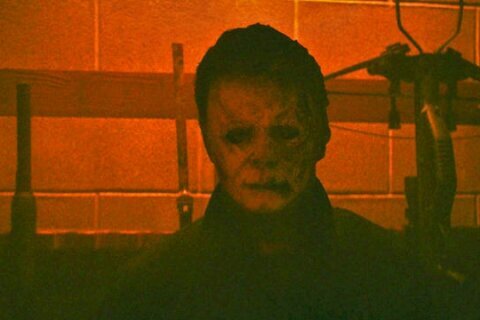 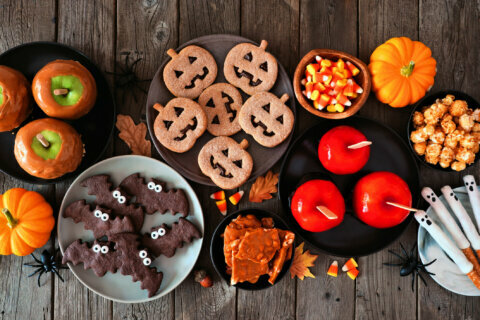