The Georgia prosecutor investigating potential criminal interference in the 2020 presidential election is considering requesting that former President Donald Trump testify under oath to a grand jury, while several Georgia Republicans already subpoenaed as part of the probe have received letters informing them that they're at risk of being indicted.
Listen now to WTOP News WTOP.com | Alexa | Google Home | WTOP App | 103.5 FM

ATLANTA (AP) — The Georgia prosecutor investigating potential criminal interference in the 2020 presidential election is considering requesting that former President Donald Trump testify under oath to a grand jury, while several Georgia Republicans already subpoenaed as part of the probe have received letters informing them that they’re at risk of being indicted.

The developments underscore the accelerating nature of Fulton County District Attorney Fani Willis’ investigation and the key decisions that may lie ahead for prosecutors who for more than a year have been scrutinizing efforts by Trump and his allies to undo his election loss in Georgia.

Jeff DiSantis, a spokesman for Willis, told The Associated Press that Willis is considering subpoenaing Trump to testify before a special grand jury. Such a demand would almost certainly trigger an immediate court fight, including potentially over Trump’s constitutional protections against self-incrimination. Yahoo News had reported earlier Friday that Willis is considering requesting Trump’s testimony.

Meanwhile, some people who had been subpoenaed have subsequently received so-called target letters, according to a person familiar with the matter who insisted on anonymity to discuss an ongoing investigation. Prosecutors generally issue such letters to inform people they’ve been investigating that they have developed evidence against them and that they’re in jeopardy of being criminally charged.

The person who confirmed the issuance of the target letters, which were first reported by Yahoo, would not identify any of the recipients.

Randy Evans, a Georgia attorney who was Trump’s ambassador to Luxembourg, said the letters went to prominent Georgia Republicans who were involved with submitting an alternate slate of electors who asserted that Trump had won the state.

Evans said he’s a Republican who actually supported Willis’ investigation in the beginning because he believes transparency is a good thing. But he was disappointed to see the suggestion that participating in an alternate slate of electors constitutes a criminal violation.

“Now it’s pretty clear that it’s largely just another act of politics in an election year,” he said.

Also Friday, state Sen. Burt Jones, who’s the Republican nominee for lieutenant governor in November’s general election, filed a motion to disqualify Willis and her office from the investigation. His lawyers argue that Willis has a conflict of interest because she is an active supporter of Jones’ Democratic opponent.

The special grand jury was seated in May at Willis’ request and has been investigating whether Trump and others illegally tried to meddle in the 2020 election in Georgia as the Republican desperately tried to cling to power after his loss to Democrat Joe Biden. Trump continues to insist that the election was stolen, despite the fact that numerous federal and local officials, a long list of courts, top former campaign staffers and even his own attorney general have all said there is no evidence of the fraud he alleges.

Willis has confirmed that the investigation’s scope includes a Jan. 2, 2021, phone call between Trump and Georgia Secretary of State Brad Raffensperger. During that call, Trump urged Raffensperger to “find” enough votes to overturn his loss in the state.

“All I want to do is this. I just want to find 11,780 votes, which is one more than we have,” Trump said during that call. “Because we won the state.”

Trump has denied any wrongdoing and has repeatedly described his call to Raffensperger as “perfect.”

Willis, a Democrat, has also said that her team is looking into a November 2020 call that U.S. Sen. Lindsey Graham, R-S.C., made to Raffensperger and false claims of election fraud that were made by former New York mayor and Trump attorney Rudy Giuliani and others during December 2020 legislative committee hearings at the state Capitol.

Graham and Giuliani are among the Trump associates Willis is trying to force to go to Atlanta to testify before the special grand jury.

Willis has also indicated that she’s interested in the actions of the group of 16 Georgia Republicans who signed a certificate falsely stating that Trump had won the state when it was actually Democrat Joe Biden who got the most votes. They cast their fake electoral votes behind closed doors at the Georgia Capitol on Dec. 14, 2020, the same day that the actual Democratic electors met to cast their votes.

Jones was among those who signed the certificate, which was then sent to Congress and the National Archives.

The motion filed Friday by his lawyers says Willis donated to the campaign of Democratic lieutenant governor nominee Charlie Bailey and last month hosted a fundraiser for him. It says the entire Fulton County district attorney’s office should be disqualified “from the investigation and prosecution of Mr. Jones,” the motion says.

The special grand jury cannot issue indictments. Instead, it is to issue a report with its findings and recommendations, and it will then be up to Willis to decide whether to seek an indictment from a regular grand jury.

“Burt is more than happy to perform his civic duty and answer questions — but not from a prosecutor with such blatant conflicts of interest,” Lawson, the campaign spokesman, said in a statement.

DiSantis, the Willis spokesman, said the motion is without merit.

Willis’ “support for Mr. Bailey has nothing to do with his opponent, nor does her fulfillment of her oath of office to investigate and prosecute crimes occurring in Fulton County have anything to do with anyone else’s campaign for elected office,” DiSantis said in an email. 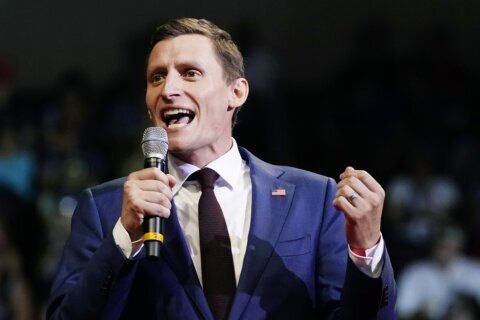