Kaine: Gun violence ‘a real sickness in this country’

A day after a mass shooting in California, Sen. Tim Kaine, D-Va., says Congress needs to "quit hiding and address what is a real sickness in this country.”

WASHINGTON — It’s not known yet what led Syed Farook and Tashfeen Mailk to kill 14 people and wound 17 at a holiday party for his co-workers the Inland Regional Center in San Bernardino, California, on Wednesday. But the second mass shooting in the U.S. in less than a week has intensified the debate over gun control, and Sen. Tim Kaine, D-Va., says it’s time for action.

“It’s past time for Congress to quit hiding and address what is a real sickness in this country,” Kaine said on WTOP Thursday.

Kaine, a former governor of Virginia, tells WTOP the shooting at Virginia Tech was a pivotal experience to his thinking on the issue. He says he did what he could as governor, issuing executive orders to strengthen the state’s system of background records checks, “and it made us safer.”

For further measures, Kaine says, he says he needed laws to pass through the General Assembly, but that didn’t happen.

Thursday morning, authorities confirmed that all the guns used in the San Bernardino shooting were obtained legally.

Referring to the first step in the routine of 12-step programs to help addicts, Kaine says of the country now, “You’ve got to admit you’ve got a problem, and we’ve got one.”

There have been more than 350 mass shootings (defined as shootings in which four or more people, including the shooters, are killed or wounded) in the U.S. this year, but nothing substantial has been done to curb access to guns, and Kaine says that political leaders aren’t listening to the public.

At this point, Kaine says, such voices are part of the problem: “I believe in good and evil in the world. And people who do these shootings are evil. But people who say nothing can be done, that’s a voice of evil too. That’s been a voice throughout history: ‘Oh, nothing can be done, we can’t do anything about it.’ That’s just wrong. Being a bystander when bad things are going is not a morally acceptable position.”

Kaine referred sadly to a BBC report on the San Bernardino shooting that began, “Just another day in the United States of America — another day of gunfire, panic and fear.”

It provides “the window into us” that doesn’t look good, Kaine says.

In a related matter, a former Republican congressman has called for the Centers for Disease Control and Prevention to research gun violence as a public health issue, nearly 20 years after he successfully fought to prevent the federal government from doing just that.

“It is my position that somehow or someway we should slowly but methodically fund such research until a solution is reached. Doing nothing is no longer an acceptable solution,” Jay Dickey wrote on Tuesday to Rep. Mike Thompson, chairman of the House Democrats’ Gun Violence Prevention Task Force, which was created in the wake of the Sandy Hook massacre in 2012.

“Research could have been continued on gun violence without infringing on the rights of gun owners, in the same fashion that the highway industry continued its research without eliminating the automobile,” the letter continues. 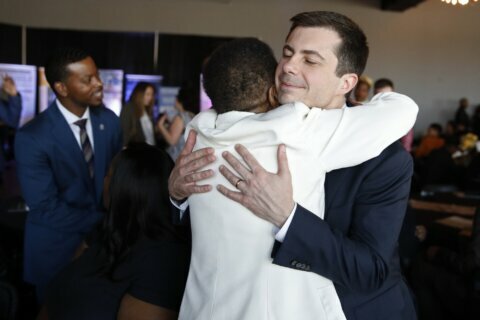