Ewing takes 1-shot lead over Fassi on LPGA in Cincinnati

CINCINNATI (AP) — Ally Ewing shot into the lead with a fast start and stayed there on a soggy course Saturday for a 5-under 67 to build a one-shot lead over Maria Fassi in the Kroger Queen City Championship.

Ewing’s first order of business this deep in the LPGA Tour season is to make sure she is among the 60 who reach the final event, which she has done every year since 2017. A victory would take care of that.

Ewing has not finished in the top 10 all year, but she was practically flawless at Kenwood Country Club. She has six birdies and was bogey-free until the final hole, playing even longer than its 446 yards because of the soggy conditions that allowed for preferred lies.

She missed the green with a metal to the right, had very little green to work with and pitched about 18 feet by the hole.

Right behind was Fassi, the dynamic Mexican with the powerful swing who matched Ewing with a 67 and will play in the final group with her Sunday with a chance to win her first LPGA title.

Fassi closed in on the lead at the par-5 15th after she had short-sided herself by missing the green to the right with a pin tucked to the right behind a bunker. She hit a flop shot that landed a few feet short of the hole and rolled for eagle.

Fassi showed off her length on the 18th hole, needing only a 5-iron to reach the green for a two-putt par on a closing hole that hurt other chances.

Sarah Kemp (70) and Megan Khang (69) both hit a metal and missed the green, each making bogey to fall four shots behind. Khang and Kemp are trying to win on the LPGA Tour for the first time.

Khang finished one shot behind Gary Lopez a week ago at the Dana Open as the final group struggled.

“We saw last week Gaby and I kind of fought it out in our group, and I think we were like third or fourth to last group. So it’s golf. Anything can happen,” Khang said. “Just got to stay within yourself and give yourself the chance.”

Ewing, with two LPGA victories in her career, started the third round one shot behind and quickly erased that with a pair of birdies, along with another on the par-5 fourth hole. Ewing birdied all four of the par 5s.

Xiyu Lin had a 70 and was three shots behind.

More soggy conditions are expected for the final round in Cincinnati, which has not had the LPGA Tour in town since 1989. Tee times have been moved up in the final round.

The 29-year-old Ewing has won in each of the last two years on the LPGA, at the Bank of Hope

It’s also a big final round for Fassi, the Arkansas grad who is No. 97 in the Race to CME Globe and has never won on tour. 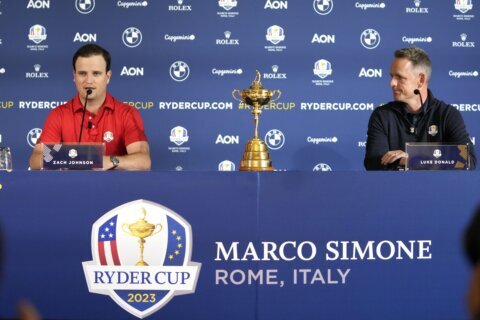 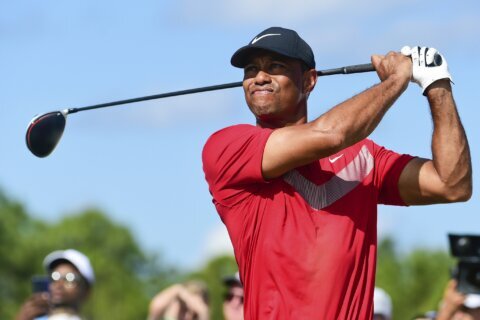