Newlyweds team up for week of their lives at St. Andrews

ST. ANDREWS, Scotland (AP) — It is golf’s new power couple. Well, at least for the next few weeks.

After all, no other husband and wife is believed to have played in the men’s and women’s British Opens in the same year.

No wonder newlyweds Alex Wrigley and Johanna Gustavsson had wide smiles as they posed for photos on the Swilcan Bridge under bright sunshine near the end of a practice round on the Old Course at St. Andrews on Tuesday.

For Wrigley in particular, these are pinch-yourself moments after years of living in the shadow of the woman he married just a few weeks ago.

While Gustavsson, a Swede, has established herself as a leading player on the Ladies European Tour — she is third in the order of merit for 2022 — and has played in the women’s majors, Wrigley has spent more than a decade competing in regional qualifying events to get a chance to play at the British Open.

When he isn’t playing on the satellite tours across Europe, he teaches golf in both Sweden, where the couple lives, and in his native England. Among the people Wrigley coaches is Gustavsson, since 2016.

“Alex is always with me, supporting me in my career,” Gustavsson said at the back of the 18th green, standing proudly alongside her husband. “So it’s good he is getting to be in the center of everything this week.”

That’s because Wrigley finally got into the Open Championship this year after winning a playoff in final qualifying at nearby Fairmont St. Andrews last month.

Gustavsson was scheduled to be playing an LET event in the Netherlands this week. Those plans were immediately canceled — she was going to caddie for her husband at the home of golf.

And there she was Tuesday, lugging Wrigley’s bag around the Old Course and offering advice to her husband only when asked.

“Johanna brings a lot of experience to the role — she has played in four or five majors already, in front of big crowds — so she is very calm in these sorts of situations,” Wrigley said, explaining the on-course dynamic between the couple. “I just want some of that to rub off on me if it can.

“I learn a lot from her, definitely from the psychological part of things. She is further on in her career, playing-wise, than I am and had more experience on the big stage.”

Wrigley, who earned around $7,000 from each of his two biggest wins as a pro, was nervous when he turned up at St. Andrews over the weekend, according to Gustavsson.

But she has seen him getting accustomed to crossing paths with the biggest names in the sport. On Tuesday, he played his practice round with 1999 champion Paul Lawrie, one group ahead of Rory McIlroy. On Sunday, Padraig Harrington and Shane Lowry joined Wrigley on the seventh hole and they played the rest of the round together.

“It is a different world,” Wrigley said, “but the more you spend time with them, you realize all these great players are normal people, too. They are down-to-earth people who are just really good at golf.”

Next week, normal order will resume. Gustavsson will be playing major golf at the Evian Championship and Wrigley will be watching her. It won’t be long before he’ll be back coaching, alternating between Orebro in Sweden and his home club in northeastern England, Hartlepool Golf Club.

“I have a loyal customer base in Hartlepool that keeps coming back to me,” he said.

Wrigley sure will have some stories to tell them at their next lessons. 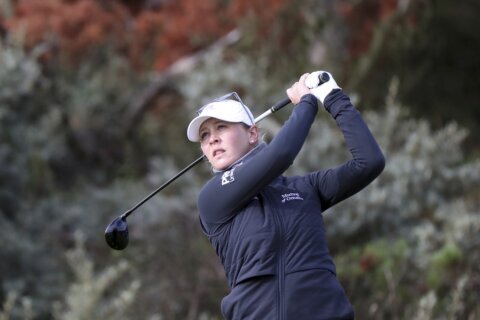