As golf coach at Calvert Hall High School in Baltimore, Drew Forrester preaches perseverance to his student athletes, and to his lessons, he can add a powerful story.
Listen now to WTOP News WTOP.com | Alexa | Google Home | WTOP App | 103.5 FM

As golf coach at Calvert Hall High School in Baltimore, Maryland, Drew Forrester preaches perseverance to his student athletes, and to his lessons, he can add a powerful story.

Forrester is one of 34 amateurs to qualify out of 2,999 that tried for the U.S. Senior Open underway in Omaha, Nebraska.

The 58-year-old Forrester has been trying to qualify for the Senior Open since he turned 50, and he finally broke through when he earned a spot in June at the sectional qualifier at Argyle Country Club in Silver Spring.

“You can do anything in golf that you put your mind to,” Forrester said. “You just have to work hard at it, it is a workers game. Don’t get me wrong, golf requires a lot of talent but to have consistent success in golf requires diligence and hard work.”

Forrester is also proof it is never too late to pursue a passion. Growing up in Glen Burnie, Forrester played soccer and hockey and did not start playing golf until he was 23.

At the time, he was public relations director of the Baltimore Blast professional indoor soccer team and he was advised by the team’s head coach Kenny Cooper to take up golf to help him build relationships with local sportscasters and writers.

Now, more than three decades and countless rounds of golf later, Forrester is in a major competition with some of the game’s all-time greats.

“One thing that I’ve noticed in playing with them is how much they prepare and how every detail matters to them,” Forrester said. “I mean, Bernhard Langer literally charts the wind on every shot. He charts how far he carried the ball, how far he intended to carry the ball. The elite golfers are that precise and that dedicated.” 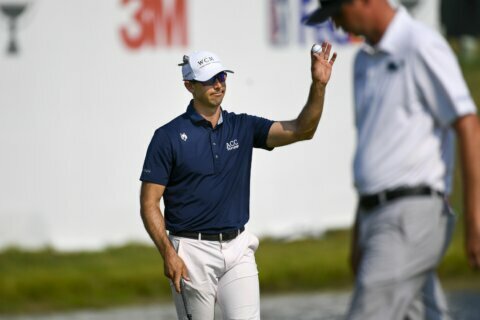