The spotted lanternfly — an invasive insect from Asia — had been, so far, only seen in several counties outside of Philadelphia, but, this year, it has been sighted in parts of Virginia. Garden Plot editor Mike McGrath explains.
Listen now to WTOP News WTOP.com | Alexa | Google Home | WTOP App | 103.5 FM

Another invasive insect arrives in the region

The spotted lanternfly — an invasive insect from Asia — had been, so far, only seen in several counties outside of Philadelphia, but, this year, it has been sighted in parts of Virginia.

Here’s what to know about the spotted lanternfly:

If you see any of these life cycles, please report the location immediately.

From Pa. to Va. with love (actually, stone)

The invasion began several years ago in an area of Pennsylvania where several counties meet up: Berks, Bucks, Montgomery and Lehigh. A new invasive insect called the spotted lanternfly had been sighted.

A notorious pest of grapevines and other fruits in its native Asia, its favorite food source was — and still is — the ironically named “Tree of Heaven,” itself an Asian invasive. The insanely colorful adults have been spotted by the hundreds on these trash trees, depositing enormous amounts of their sweet “honeydew” — a much too-nice name for bug poop — that attracts large numbers of ants and wasps, especially dangerous yellow jackets.

And now that they’ve hitchhiked to Virginia (reportedly on a truckload of Pennsylvania stone), it is imperative that you report any sightings of any life cycle of this destructive insect.

This January, the mudlike egg masses of the spotted lanternfly were spotted in Virginia for the first time in the Front Royal area.

In April, they spotted the black and white nymphs, which, despite the “fly” in their name, are long-distance hoppers.

By July, the almost too-colorful adults were spotted, laying large numbers of eggs, especially on the also invasive “Tree of Heaven.” Grapevines are next.

As of early October, some adults are still being observed, although the biggest threat is the mudlike egg cases, which are often laid on the sides of vehicles (especially the often already-muddy wheel wells), allowing the invaders to travel long distances while dormant.

If you’re in the target area, have seen the adults or have recently traveled to southeast Pennsylvania, get thee to a carwash!

The spotted lanternfly — a notorious pest of grapevines and other fruit crops — has been confirmed to have spread to the Winchester/Front Royal area of Virginia.

It is imperative for everyone in the region to learn how to identify the different life stages of the pest, to report any sightings and to destroy the mudlike egg cases of the pest before they can hatch out next spring.

Penn State has the most and best informational articles and photos of this creature’s many guises, but Virginia is catching up fast.

To familiarize yourself with the invasive spotted lanterfly, read up on these websites (your grapes and fruit trees are depending on you):

A final word: Please do not use insecticides or sticky traps until you check out next week’s “Garden Plot,” where I will attack this pest with effective common-sense solutions.

Please report sightings of the Spotted Lanternfly in Virginia, Maryland and D.C. here. The site is technically for Virginia, but D.C. or Maryland findings will be sent to the appropriate state or federal agency for their area.

In other news this week: Pretty orchids!

Whew — we need this relief!

Ready for a dazzling orchid extravaganza? The National Capital Orchid Society’s annual show and sale returns to spoil us with one of the best free events in the area. As it has for the past several years, the Orchid Extravaganza will be held at Behnke’s Nursery on Baltimore Avenue in Beltsville, Maryland, running Friday through Monday (which is Columbus Day).

Now in its 71st year, you’ll see thousands of orchids on display and for sale. “Orchid doctors” will be on hand to diagnose what ails your particular plant, and educational talks are scheduled every day over this long weekend — and it’s all free. 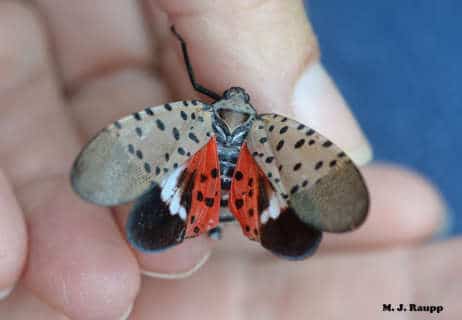