No need to kick this nest: These hornets more likely keep to themselves

Hornets can be very dangerous if you act like Elmer Fudd and try to knock their nest down with a stick. But otherwise, they are harmless.
Listen now to WTOP News WTOP.com | Alexa | Google Home | WTOP App | 103.5 FM
(1/2) 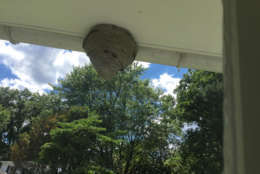 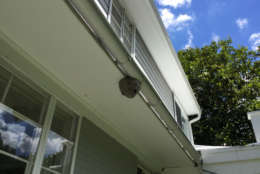 Tom, “a retired math teacher in Bethesda,” writes: “We have had a nest being constructed on the eaves of our house since May.

“The bugs in the nest look like bees, but I searched around the internet and have concluded that they might be European hornets or bald faced hornets. I’m not sure which. Their markings — yellow facial and fanny marks — don’t quite match the images on the Net.”

Yes Tom, you indeed have the proverbial hornets nest attached to your home. Hornets are in the wasp family and are not bees of any kind. They do have stingers but have no interest in using them on you. And as you note — and your photos reveal — the nest is way up high on your house, where you won’t come into contact with them. So unless you do something really clever, like try and remove them, they will not harm you.

Tom in Bethesda, host to a hornets nest, continues: “The nest is a distinctive papery gray, and the hornets have been building it for two months, adding a layer about every two days. It is now about seven inches in diameter with a nasty looking spout-like opening at the bottom. I do gardening chores every day, sometimes right underneath them, but they don’t seem to mind. No stinging yet. Are they dangerous?”

Hornets can be very dangerous if you act like Elmer Fudd and try to knock their nest down with a stick, Tom. But otherwise, they are harmless. Unlike highly aggressive yellowjackets that nest in the ground, hornets that build their nests high up on homes or in trees are no danger to people.

Unless, of course, those people act like they’re in a Warner Bros. cartoon.

Hornet-hosting Tom in Bethesda continues: “How big will the nest get?”

The somewhat-similar looking nests of baldfaced hornets and European hornets max out at around 500 to 600 occupants in the fall, with each nest tending to be a little larger than a football. Oh — and these creatures are very easy to tell apart.

The so-called “baldfaced” hornet is black and white in color with a really spooky-looking, almost-skull-like face, while the European hornet is yellow in color and huge, one of the biggest such creatures on the planet. Your mention of the color yellow leads us to believe that you have that giant European immigrant.

And relax: Although the internet contains dire warnings about both creatures — especially the scary-looking baldfaced hornet — I’ve had both species nest on my home and in nearby trees many times without ever being stung.

I find paper wasps and mud daubers — which tend to build their smaller nests in places humans use a lot (like behind my shutters and in my porch light fixtures) — to be much more aggressive.

Do hornets nestle in nectar?

Hornet-housing Tom in Bethesda continues: “… Are they pollinators or just breeding insects? We have excellent bloom on the entire garden this year!”

Although they aren’t widely known for it, all wasps and hornets — even those nasty and dangerous yellowjackets — perform some pollination, as do mosquitoes! In fact, male mosquitoes get all of their nutrition from pollen and nectar, and even the blood-sucking females like the sugar rush they get from visiting flowers between blood meals.

Same with wasps and hornets: Although they are primarily meat-eaters, they also enjoy a little trip to the candy store now and then, and it would not be surprising if having a hornets nest near the garden increased the number and vitality of your blooms.

Tom in Bethesda concludes: “We don’t want to kill them if they are beneficial, but they haven’t ‘introduced themselves’ one way or the other. We’re leaving on vacation in July and would hate to have to chop through a car-sized hornets nest to get back inside to rescue our cats when we return.”

They are incredibly beneficial, Tom — voracious predators of many garden pests, especially destructive caterpillars like the cabbage worm, broccoli worm and tomato hornworm. (To quote one of my favorite old agricultural books: “The farmer who destroys the hornets nest will harvest no cabbage that season.”) They are so beneficial, in fact, that it was once against the law to harm European hornets.

And don’t worry about getting back into the house. The nest will top out in size at a little larger than a football, and the cats (and cabbages) will be just fine. 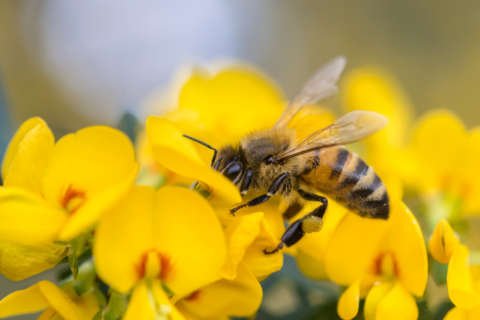 ‘40,000 bees in Fredericksburg’ really isn’t as scary as it sounds