Garden editor Mike McGrath explains the difference between yellow jackets and honeybees — and if it's the former, how to get rid of them.
Listen now to WTOP News WTOP.com | Alexa | Google Home | WTOP App | 103.5 FM
(1/3) 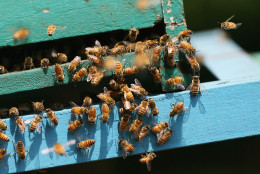 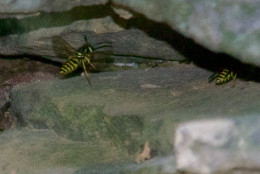 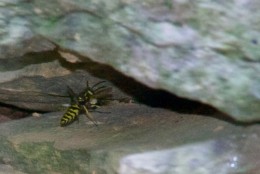 Yellow jackets are not bees of any kind!

Sean in Alexandria, Virginia, writes, “The timing of your recent mention of Yellow Jacket nests was serendipitous, as I just discovered ‘bees’ living in a stone wall in my yard. I think these are Yellow Jackets, but have not wanted to get close enough to be sure. In any case, there are a lot of them and they are yellow. How would you suggest I deal with these bees?”

First, let me correct you and pretty much everyone else out there, Sean — yellow jackets are in the wasp and hornet family and are not bees of any kind.

What’s the difference? In the bee family, only honeybees sting — and they don’t like to do it because they lose that stinger and die. Many members of the wasp family sting and they can sting repeatedly without any harm to themselves. Yellow jackets actually like to sting.

If your yellow insects were coming in and out of a hole in the ground, they would definitely be yellow jackets; honeybees don’t nest in the ground, and native stingless bees are solitary nesters. But a lot of yellow insects in a garden wall could be an escaped “feral” (or “wild”) colony of honeybees, which are prized by beekeepers for their stamina.

So let’s figure out which ones you are dealing with.

Yellow jacket or honeybee? Here’s how to tell

When we told Sean in Alexandria that the yellow flying insects living in a stone wall in his yard may be an escaped honeybee colony, he responded, “I know that the bee population has been struggling, and I don’t want to wipe out a colony if they’re not Yellow Jackets.”

Both insects are yellow with black markings, but yellow jackets are a brighter, shinier yellow. They are hairless and have that famously distinctive thin, wasp-like waist. Honeybees are fatter, less brightly colored and look kind of fuzzy.

If it is honeybees you have, contact your local beekeeper’s association to see if someone wants to come out and move the hive, which they would probably do in late fall or early winter.

Alternatively, you could just leave them alone and enjoy the benefits of their pollination (and potentially for a long time — unlike yellow jackets and other wasps, honeybees will continue to use the same nest year after year.)

But if they are dangerous and aggressive yellow jackets and they are anywhere near a home, the nest must be destroyed.

Don’t waste your time with insecticides; they can’t penetrate the complex structure of the nest.

Instead, wait until the cool of late evening or dawn when any nest guards will be absent or sluggish. Just to be safe, take a can of a cooking oil spray like Pam along with you, and spray any wasps that come near you. Oil sprays are highly effective against single insects.

Then, if their nest hole is in an open and easily accessible area, just place a heavy glass bowl over the hole; they can’t dig a new way out and will cook inside their nest over the next week or so.

If the nest entrance is in a more complex area, place the hose of an old canister vacuum nearby — again, when the air is cool and the yellow jackets are sluggish — and then turn it on after it is in position and you have a clear exit path. The preferred way to do this is to have the machine switched on but not yet plugged in; then you can start it up from a distance using the plug or an extension cord. Either way, the wasps will attack the noisy machine and be sucked to their deaths. When you don’t see anymore yellow jackets, cover the hose end with duct tape, turn the machine off and let it sit in the sun for a few days.

If you have one of those “bug zappers” sold to kill mosquitoes, do the same as you would with a vacuum cleaner. The wasps will attack this buzzing intruder until they are all zapped.

Oh — and don’t worry about the actual nest; it won’t be reused by next year’s wasps.

The five-point plan for great-tasting tomatoes

Got ripe tomatoes yet? Big heirlooms varieties are going to take a lot longer to be ready, but early varieties like Stupice, Fourth of July and Early Girl should be coming on strong right about now. For best flavor:

How are your roses doing?

Aside from the fact that I had to squish a fair number of Japanese beetles this season, my roses are trouble-free and blooming their best ever. Here’s how to get yours to do the same: