A cold front combined with a wave of low pressure coming into the D.C. area moves rain chances for the Fourth of July to the "likely for some" category, according to NBC Washington's Storm Team 4.
Listen now to WTOP News WTOP.com | Alexa | Google Home | WTOP App | 103.5 FM

WASHINGTON — A cold front combined with a wave of low pressure coming into the D.C. area moves rain chances for the Fourth of July to the “likely for some” category, according to NBC Washington’s Storm Team 4.

Chances of rainfall were at 40 percent as of Tuesday morning, with highs in the upper 80s to lower 90s. Bell told WTOP that most of the rain threat would be between 3 p.m. and 7 p.m., but fall quickly after 8 p.m.

Bell said the possible afternoon storms would be particularly slow moving and primarily be driven by daytime heating. Most of the daytime heating will lose it’s punch after 5 or 6 p.m., he said, and most of the fireworks displays should be able to take place after 9 p.m.

“Storms will be a bit more likely South and West of the D.C. Metro area and a bit less likely for Northern Maryland and the Northern Shenandoah Valley,” Bell said.

Bell recommended having a backup plan and dry shelter at the ready for any outdoor plans. 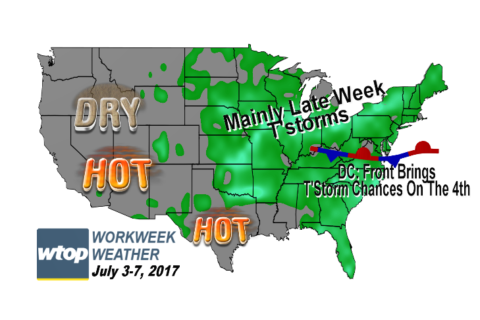 Workweek weather: Hot, humid with a few chances of storms