It took several years for Karan Singh to open Punjab Grill on 11th Street NW, just blocks from the White House. And that's because nearly everything in the 5,000-square-foot restaurant — from the marble floors, to the sandstone walls, to the 3-ton faceted ceiling — was built in India and shipped to the U.S. Here's a peek inside the newest addition to D.C.'s fine-dining scene. See photos.
Listen now to WTOP News WTOP.com | Alexa | Google Home | WTOP App | 103.5 FM

Opening Punjab Grill was a decades-long dream for Karan Singh.

“Ever since I started coming to the U.S. and saw that Indian food wasn’t so well represented here, I’ve been wanting to do something to make Indian food more of a mainstream cuisine,” said Singh, co-owner of the Tysons Corner restaurant American Tandoor and CEO of Punjab Grill US, which has locations in India, Singapore, Thailand and the United Arab Emirates.

And planning for that dream was no small feat. Unlike other restaurants that take about a year to build out their space and open their doors, Singh spent five years planning the design and development for Punjab Grill, located on 11th Street NW, just a few blocks from the White House.

Permits and construction are often to blame for opening delays, but Punjab Grill’s source of slowness had a lot to do with its aesthetics. Nearly everything in the 5,000-square-foot restaurant — from the marble floors, to the sandstone walls, to the 3-ton faceted ceiling — was built in India and shipped to the U.S.

“The floor that you’re standing on right here, it was cut and pieced together painstakingly then taken apart, numbered and sent to us. And we actually put it back together here like a jigsaw puzzle,” said Singh, who sent his American contractor to India to spend time with the artisans and builders to “coordinate everything down to the last screw.” 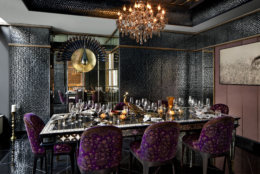 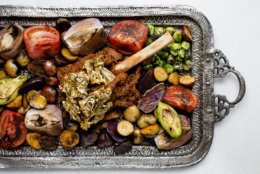 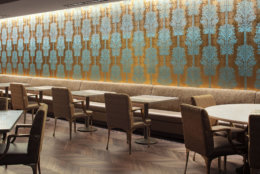 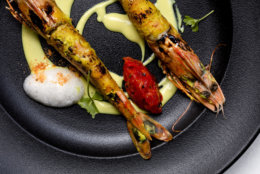 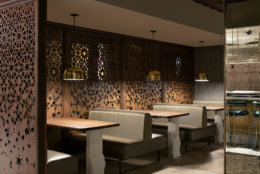 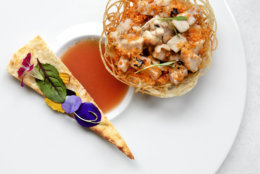 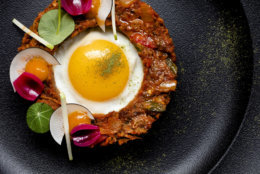 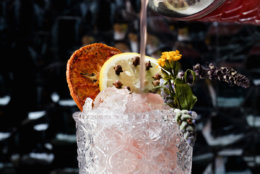 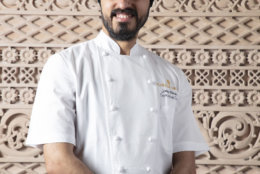 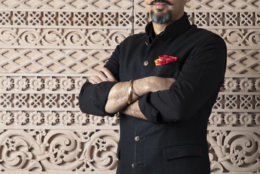 Wooden screens that separate the restaurant’s entryway from one of its dining rooms were carved using centuries-old techniques; the mother-of-pearl inlay on the bar was modeled after architecture in the Taj Mahal. Singh even worked with an India-based textile designer to custom make fabrics for the chairs and curtains, and he created a private dining room, dubbed the “sheesh mahal,” or palace of mirrors, which is decorated with 150,000 convex mirrors. Hermès plates set the 10-seat table.

“The idea was that we really wanted to change the perception of Indian food and what Indian fine-dining can be,” said Singh, a native of the Punjab region of northern India.

“The service, the food, the ambiance, all of it has to come together for people to really see this as an alternative to French or Italian or your other cuisines that are typically considered fine dining.”

The menu at Punjab Grill showcases Punjabi cuisine, which executive chef Jaspratap (Jassi) Bindra said draws influences from many cultures beyond its northern India boundaries, “because every emperor passed through Punjab.”

“It is rich in dairy, rich in culture. People live to eat,” Bindra said.

Tandoor-grilled meats, breads and plenty of vegetable-based stews, plus pickled vegetables and yogurt accompaniments, are common in Punjabi cuisine.

The restaurant’s signature dishes include a sikandari leg of lamb, served with a gold leaf; hummus made from a puree of a classic chickpea curry; and tandoori tiger prawns. Bindra also makes a jackfruit biryani, served with basmati rice and a coconut beetroot raita.

“Our main vision of our food is keeping it very authentic and very traditional, but with our interpretation,” Bindra said.

Even the cocktails channel flavors commonly found in Punjab. Many contain spices, such as turmeric, garam masala, cardamom, cumin and ginger.

“We wanted to have a completely immersive experience,” Singh said.

McDonald’s finally announces when its new loyalty program will launch 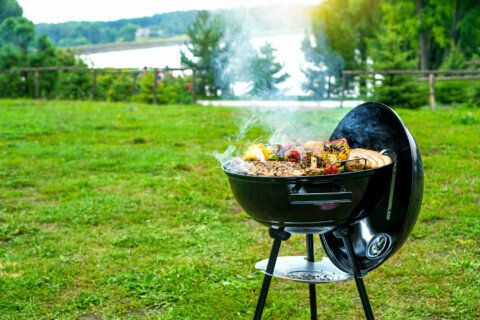