CORONAVIRUS NEWS: CDC to shorten guidance for quarantine | Who will get the vaccine first? | Health tips during the pandemic | Latest test results
Home » Food & Restaurant News » The most environmentally friendly…

The most environmentally friendly (and healthy) meats

Here's some food for thought: The meat you eat can taste better, and be better for for the environment.
Listen now to WTOP News WTOP.com | Alexa | Google Home | WTOP App | 103.5 FM

When Oscar Toro eats his daily hard-boiled eggs (at lunch) and chicken breast (at dinner), he knows exactly where both came from — and it’s not a grocery store. They came from a farm in Pennsylvania, where the chickens roam freely and eat whatever grass, bugs and seeds they’d like. The New York City-based chef chooses such meats for both his personal life and the restaurants he sources because doing so tends to make less of an environmental impact, is better for animal and human health and, frankly, tastes better, he says, compared to mass-produced varieties. Curious about following suit? Here’s how to shop for the most environmentally-friendly meats:

The clearest way to support the environment is to follow a vegetarian or vegan diet, says Diane Danchi, a registered dietitian at UNC REX Healthcare in Raleigh. That’s because the diets’ foundational foods — fruit, vegetables and grains — have the smallest carbon footprint. Producing animal products, on the other hand, requires lots of chemicals, fuel and water, and also generates waste that leads to pollution. But meat-lovers don’t have to go cold Tofurky. Ryan D. Andrews, a registered dietitian in Norwalk, Connecticut, and author of “A Guide to Plant-Based Eating,” recommends experimenting to find your “minimal effective dose,” meaning the least amount of meat you can eat and still be happy and feel good. “There’s a lot of individuality with animal consumption,” he says.

Know how different meats stack up.

Keep in mind, too, that eating a lamb chop isn’t the same as eating a chicken thigh — from both an environmental and health perspective. Chicken and turkey are the best meat picks for the planet, while beef and lamb are the worst, according to the Environmental Working Group’s meat-eater’s guide. Similar guidance could apply to your body. “Red meat … is a player in heart disease because of the saturated fat (content) and the amino acid carnitine,” Danchi explains. She endorses the Mediterranean diet — also considered the best diet by U.S. News experts — which recommends fish, poultry and plant-based protein over red meat consumption, which should be limited to two or three times a month.

Once you know about how much and which types of meats you’re shopping for, consider where to shop. One optimal choice is at a local farmers market, where you can talk to the farmers about where and how their animals were raised. A community supported agriculture program, or CSA, is also a great choice for having fresh, local animal products (and produce) shipped directly to your door. Taking advantage of both options — even if only occasionally — will help limit purchases from concentrated animal feeding operations, or CAPOs, where most Americans get their meat, Andrews says. Operating one, he says, requires “a lot of output, a lot of energy, feed, water, waste — there’s all these environmental repercussions.”

If farmers markets and CSAs are out of the question for you, “there are shortcuts,” Andrews says. To use them, you need to become a label-reading sleuth, since some nice-sounding labels like “free-range” are often misleading. (The moniker can apply to chickens that technically have access to the outdoors, but may never leave their sheds.) Among the most trustworthy and meaningful labels to look for: Global Animal Partnership, which notes levels of animal welfare (EWG recommends looking for those marked 3 and above), and Certified Humane, which indicates that animals can’t be confined, among other stipulations. Check out the EWG’s label-decoder to learn more.

Be a prudent cook.

Got meat? Get cooking! Andrews recommends using meat in soups and stews since that cooking method doesn’t produce the potentially harmful compounds that come with high-heat cooking. It also makes limiting meat consumption easy. For example, try subbing in beans for half the meat. “Beans are my go-to because they’re the plant food group that most closely resembles meat in terms of protein, vitamins and minerals,” Andrews says. Soups and stews are also great places to use bones and other remnants, which can help cut down on environmental waste. Chef Toro, for one, uses every part of 200-pound pigs. Bonus: Because they’re humanely raised without chemicals and drugs, he says, “every part tastes delicious.”

How to Eat Meat if You Care About the Environment

— Know how different meats stack up.

— Be a prudent cook.

What’s Really in Those Meatless Meats?

Why These Famous Vegetarians and Vegans Pass on Meat

The Most Environmentally-Friendly (and Healthy) Meats originally appeared on usnews.com 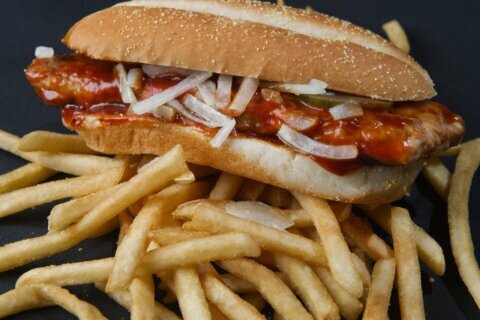 McDonald’s is giving away 10,000 free sandwiches for fans who shave their faces