Coronavirus News: Fairfax Co. votes to increase substitute teacher pay | Is it time to get a COVID-19 booster? Which one? | Local cases of COVID-19 | How many in DC region are vaccinated?
Home » Food & Restaurant News » Joey Chestnut looks to… 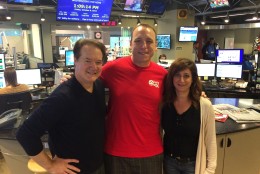 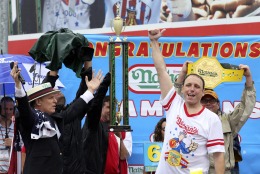 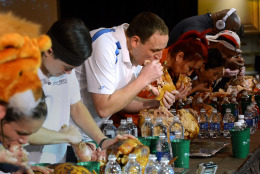 Two gallons of chili. In six minutes. And you thought you ate a lot at Thanksgiving.

“Two gallons is a pretty tough mark to hit,” the competitive eater told WTOP on Friday. “I’ve done it a couple times, but the Ben’s chili is delicious, so that makes it a lot easier.”

On Saturday, Chestnut will compete in the 2015 Ben’s Chili Bowl’s World Chili Eating Championship in the District. He won last year’s event by scarfing down 7.5 bowls of chili.

Can he do it again?

“I’m hoping I can,” Chestnut said. “The competition’s gonna be pushing me. I love to eat and I love to win, so competitive eating is perfect for me.”

This year, Chestnut faces tough competition from local residents Sonya Thomas — of Alexandria, Virginia — and Juliet Lee — of Germantown, Maryland. A total of 11 eaters will compete in this weekend’s event.

Nicknamed “Jaws,” Chestnut has been a competitive eater for 10 years. He’s eaten a variety of foods along the way — including 12 pounds of asparagus spears, 182 chicken wings and 141 hardboiled eggs. In 2007, Chestnut defeated six-time defending champion Takeru Kobayashi in the 92nd annual Nathan’s Hot Dog Eating Contest by eating 66 hot dogs and buns in 12 minutes, a world record.

Chestnut said it’s easier to prepare for chili eating contests. Hot dogs involve a lot of chewing; with chili, if you like the taste of it, just make your stomach is empty to consume large portions. Chestnut was fasting when he visited WTOP — no solid food, a little bit of liquid amino acid and lots of water.

And sure, competitive eating is an acquired taste, but it’s just as rigorous as other sports.

“It’s like anybody who pushes to a ridiculous limit, whether you’re a runner or boxer,” Chestnut said of the after-effects. “You’re gonna feel like garbage.”

“I have some Pepto-Bismol in the fridge,” he concluded. “But once I get [the food] down, I’m exhausted. I have to stand around and talk to people for a while and let the food settle. Then, when I’m done, I just wanna take a nap.”

Saturday’s contest takes place at 3 p.m. EST at the Taste of D.C. Festival along Pennsylvania Avenue. The top prize is $1,750.