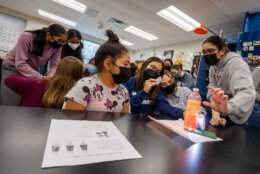 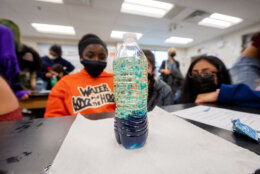 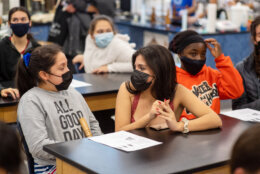 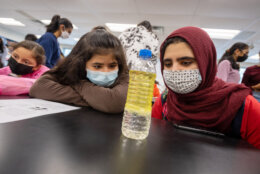 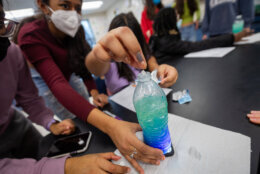 As a sophomore at Thomas Jefferson High School for Science and Technology, Sydney Belt was paired with an elementary school student who exclusively spoke Spanish when the campus’s WISE club met.

Belt had some familiarity with the language after taking Spanish classes, but she wanted to make the experience meaningful when the Women Interested in Science and Engineering club met at the Fairfax County, Virginia, school. She found herself able to communicate, but struggled to talk through the science behind each week’s task.

“I wanted to make sure that she got as much out of it as everyone else did,” Belt said.

The interaction illustrates the goal of the WISE club, a group of Thomas Jefferson High students who host about 20 elementary-aged girls from Weyanoke Elementary School every Friday. The elementary and high school students forge relationships and complete projects every week, with the objective of motivating more women to consider STEM careers.

The club has physics, chemistry, biology and math and computer science sections, said Robin Taylor, an AP chemistry teacher who has worked with the club for 13 years.

“The overarching goal is to get the younger kids in the elementary school interested in math and science and technology, so that they would later on try to pursue, maybe, studies in college or a career in the STEM field,” Taylor said. “It’s really important, because we have middle school programs and things, but we still need to reach back further to the elementary (school kids) to get their interest piqued.”

During a Friday session earlier this month, students made slushies using juice or Kool-Aid. In what Taylor described as the club’s culminating activity, students put a bag with juice into a plastic coffee can and added ice and salt. But each week, the Weyanoke students participate in a different activity.

The fifth graders at one point visited the high school’s planetarium and made rockets. Then, they evaluated how far the rockets would go. In a different meeting, the high schoolers created an engineering challenge, Belt said, urging the younger students to craft a plan to solve a problem.

In some sessions, students used the online programming software Scratch to code and animate their names. The group also used Skittles in a lesson about color contrast.

Planning for the weekly meetings starts at the beginning of the school year, when the high schoolers map out how many engineering, chemistry and biology labs they want to complete. Then, subcommittees brainstorm potential activities, accounting for materials needed and difficulty.

The club met virtually during the pandemic, so the elementary students were able to retrieve lab supplies from the bus that also brought them library books.

“What I really love is the camaraderie that the TJ girls have with planning and how they interact with the young girls,” Taylor said. “It’s like mentoring, and it’s being a buddy, and it’s a friendship, and it’s a nice link for the younger girls.”

The program seems to be effective, too.

Weyanoke student Leena Husham said she joined the club about a year ago, and it has her interested in science and engineering.

“It gives young girls in the science and engineering field some confidence,” Husham said. “It’s great that they’re doing it.”