Sending a balikbayan box is a common practice for Filipinos across the world, including in the U.S. One of the major shipping services that sends these boxes has headquarters in Springfield, Virginia.
Listen now to WTOP News WTOP.com | Alexa | Google Home | WTOP App | 103.5 FM
(1/5) 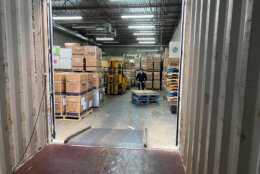 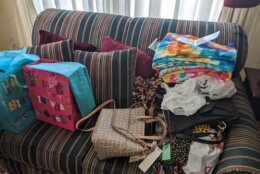 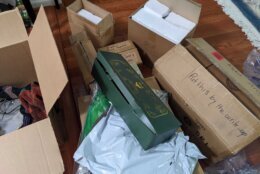 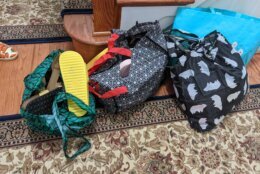 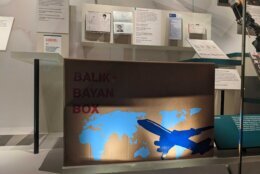 Piles of stuffed animals, clothes, hangers, towels, decorations — even bird feeders — were neatly gathered in Nita Matheson’s Springfield, Virginia, house last Wednesday. In her garage, flattened jumbo boxes lay atop even more items that she plans to send to family and friends far away.

It’s part of a Filipino tradition called a balikbayan box — a box sent by Filipinos living or working abroad to the Philippines. It may contain a variety of items, but typically, people send anything from grocery staples, such as canned goods, to personal care items (even toilet paper), shoes, nice clothes or small appliances.

Balikbayan comes from two words in the Tagalog language — balik, which means “return,” and bayan, which means “a place” (country, city, town or village). A balikbayan is a Filipino who has returned to the Philippines after living or working abroad.

It’s typical for balikbayans to bring a box filled with goodies from the U.S. to give to their relatives when they visit. But if they can’t accompany the box, they ship it. It’s a way to express their love and affection to the people they haven’t seen in a long time.

In 2019, more than 4 million Filipinos lived in the U.S., according to Pew Research Center. A majority of Filipino Americans not born in the U.S. have been here for more than 20 years; 71% are U.S. citizens.

The Philippine Statistics Authority estimated that from April to September 2020, there were 1.77 million overseas Filipino workers, or OFWs — those who work in a place of which they are not a resident. That’s down 18.6% from 2019, before the COVID-19 pandemic.

The authority found 26.6% worked in Saudi Arabia, followed by the United Arab Emirates at 14.6%; 5.2% worked in North and South America. OFWs sent more than $2.5 billion back to the Philippines in 2020.

Forex Cargo, a Filipino-owned cargo and freight delivery company whose East Coast headquarters is in Springfield, Virginia, ships balikbayan boxes to the Philippines from Filipinos all over the world. They started as a remittance company in the 1980s.

CEO Mike Claudio said that money is good to send, but it’s not a replacement for a “thoughtful packaging of a physical item.”

Matheson prefers sending balikbayan boxes to money. She sends an average of 10 to 12 boxes a year to relatives, students attending her old school and people who she knows are in need.

“Money will be gone in one to two days. They will spend it on something else. Whereas if you send goods — the bluejeans I sent will last how many years? Or these shoes — at least their broken sandals will be replaced with a new one. And they will keep on remembering me,” Matheson said, adding that their appreciation is reward enough for her.

Typically, Claudio said, Filipinos express love by asking, “Kumain ka na ba?” Have you eaten? For Filipinos abroad, sending a balikbayan box has become its own love language, he said.

“To be able to be thoughtful, and by expressing to our loved ones in the Philippines that we care and sending them a balikbayan box,” Claudio said.

A balikbayan box is related to the concepts of “pasalubong” — a gift that you bring back after visiting a place, going somewhere or being away — and “padala” — something that you send back.

Michelle Magalong, a postdoctoral fellow in the historic preservation program at the University of Maryland, said when a balikbayan comes home and brings a box with him or her, then the box is pasalubong. But when the box is sent, there’s “this sense of the return of the person.”

Forex ships an average of 30,000 boxes a month to the Philippines; this number can triple from September to December, as Filipinos all over the world send a balikbayan box in time for Christmas.

“It’s saying, ‘I want to get you something … I was thinking about you or I care about you,’” Claudio said. Moreover, it’s saying: “I’m here. I’m the breadwinner and making money for us.”

Employment is the main driver of international migration for Filipinos, with 89% citing it as the main reason for going abroad, according to the Philippine Statistics Agency’s 2018 National Migration Survey from the Philippine Statistics Agency. More than a third said that before moving abroad, their family had difficulty meeting basic needs, and more than seven in 10 said that their financial resources after they returned were sufficient.

“We are very fortunate in the U.S., because Fil-Ams are very charitable; they’re giving. And so when families and loved ones are in need in the Philippines, they step up and send more packages,” Claudio said.

That generosity was evident during the pandemic, and Forex positioned itself as a front line service because “Filipinos won’t survive without imports,” Claudio said.

Requests for pickups started coming in when the company restarted operations after a brief shutdown at the start of the pandemic, especially in countries where there were a significant number of Filipino immigrants still working.

“We were really amazed — I mean, double-digit increases in shipments,” Claudio said.

Filipinos call the sense of civic unity and cooperation “bayanihan.” It’s the same spirit that drives Matheson to give back with the balikbayan boxes she sends to the people who need clothes, food or whatever else would make their life a bit more joyful and easier, and what moved her to donate thousands of dollars’ worth of computer equipment to her old school.

Claudio said bayanihan is at the root of Forex’s values, and the fact that it’s a Filipino-owned company instills a level of trust for Filipinos worldwide.

The Philippines has over 7,100 islands — a logistics challenge for delivery companies.

“You pretty much have to have what I would call tribal or local knowledge to deliver reliably, safely, without pilferage,” especially to remote locations, Claudio said; other freight and shipping companies that are not Filipino-owned may not have as deep a delivery infrastructure.

Matheson said one of the balikbayan boxes she sent a few years back using Forex got drenched during a typhoon, but while it was a little worse for wear, all the items were still inside and the box was delivered.

How to expertly pack the box

Everyone has their own way of packing a balikbayan box, but the main thing is to maximize the space. For shipments via ocean, Forex has no specified weight limit.

“A lot of folks are smart. Instead of using packing items, they would use old clothes that (someone else) can use when it gets there,” Claudio said.

But good packers have one thing in common: a content or packing list they put inside the box. A sender has to make a list anyway, as part of documentation when the box is sent, and knowing exactly what’s inside protects everybody — sender, recipient and shipping company — Claudio said.

Another good way to pack is to separate personal care items from food. Lastly, it’s important to stay aware of what’s legal to send and what’s not.

“Fortunately, our customers again are really good about that. No guns, no bullets — you know that kind of thing. No drugs,” Claudio said.

Often, senders will indicate who the item is for, or they will write instructions on what to do with an item. Matheson is including some items to place in her parents’ memorial garden, and she has written where to put the decorative items she’s sending.

When everything is packed and taped, Forex will pick up the box. It takes up to eight weeks for the box to arrive using ocean freight originating from a Virginia port, less if it’s leaving from California. There’s an air freight option, which costs a bit more; Forex said that takes between seven to 10 days to arrive in Manila.

When the box arrives at the home of the recipient, the person who delivers the box will take photos of the balikbayan box and the recipients.

“We review those photos as part of our quality process. And it has become the most rewarding part of our jobs because you could see their faces; they’re so happy. They’re beaming. The best way I could describe it is Christmas morning all over again,” Claudio said.

Sometimes Forex will send the photos to the senders, who will get a glimpse of how things are back home or how big someone has gotten.

“It’s really pretty touching,” Claudio said. “What started as a necessity to send items to the Philippines has become a symbol or a tradition of thoughtfulness and love among the global Filipino community.”