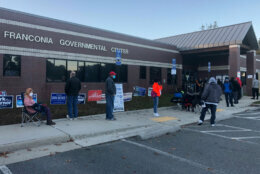 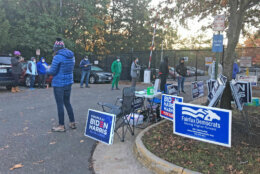 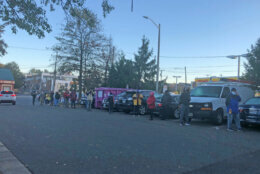 Hundreds of residents waited in line Saturday morning at the Franconia Governmental Center in Fairfax County, Virginia, for the state’s final day of early voting.

Hector Chevez and his sister, Madeline, are from Springfield and got in line to vote around 7:30 a.m. at one of the counties 14 early voting locations. “It’s better to vote early than on the day of, it’s just better just to get it over with,” said Hector, who will be voting for Joe Biden.

With hundreds of others standing in line, Madeline said she’s excited to see today’s turnout.

“It’s important to cast your vote because it makes a difference.”

Wrapped in a towel to ease the morning chill, Andi Flick and her sister, Gabriela, also waited to vote.

“I want to get it over with before election day comes because that’s when I know last minute voters are like ‘Oh! We gotta vote,’ Andi said.

This year’s election is one Gabriela said she knew she had to be a part of.

“This is especially important to get your voice heard and make sure you vote for the right person,” Gabriela added.

In Maryland and DC, you can still vote in person now through election day.