‘This was a nonevent’: Police wrap up investigation of Gannett building after report of man with weapon

Police in Fairfax County, Virginia, evacuated the Gannett building in McLean after reports of a man with a weapon Wednesday afternoon.
(1/9) 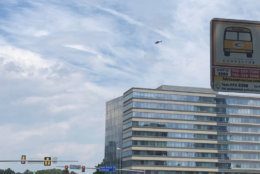 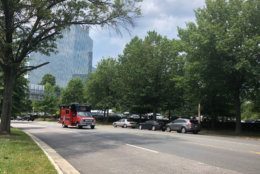 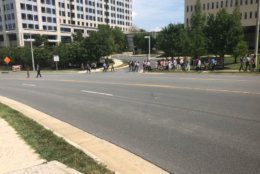 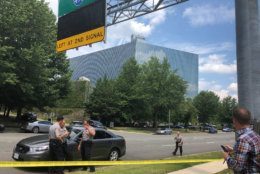 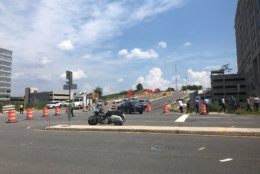 Police in Fairfax County, Virginia, have determined that no crime was committed Wednesday after receiving reports of a man with a weapon at the Gannett building in McLean.

“This was a nonevent,” county police Chief Edwin Roessler said shortly after 3 p.m., adding that the search was finished. “We cleared every single inch of that building.”

Roessler said earlier in the afternoon that a person of interest had been identified; after 3 p.m., he said that the police had found the person and were talking to him.

He added, stressing, “I do not have any evidence that this person committed a crime.”

Police responded to a call just before noon about a former employee in the building armed with a weapon. Roessler said he had no evidence that the man was a former Gannett worker; there are other businesses in the building.

There were no reports of gunfire, but people sheltered in place until police could evacuate and search the building.

Roessler added, “We need to look at this as a positive event.” People in the building “saw something that was out of place and they called 911,” just like police are encouraging people. He saw the incident as evidence that people are “training themselves: If you see something, say something.”

Taylor Rosa, an accountant for Gannett, said he was in his office when co-workers told him there were police with body armor on the campus. But he and others went back to work.

Rosa said his initial guess was that some sort of VIP was visiting the headquarters and had police protection. About five minutes later, they were told to evacuate the glass structure tucked in Tysons Corner in a row of other corporate campuses.

“There were some people that definitely had panic in their faces” as they evacuated, Rosa said. “Mostly we were just a little confused.”

A large police presence was dispatched to 7950 Jones Branch Drive, which is right by the Capital Beltway and is surrounded by other businesses.

At one point, WTOP’s Max Smith said traffic on Jones Branch Drive was diverted to the Beltway Express Lanes.

The incident came just two days after GateHouse Media, a fast-growing chain backed by an investment firm, announced it was buying Gannett in a $1.4 billion merger of two of the largest U.S. newspaper companies.

The companies said they were committed to journalistic excellence — while also cutting costs by $300 million annually. The combined company would have more than 260 daily papers in the U.S. along with more than 300 weeklies.

WTOP’s Max Smith and Rob Woodfork, and The Associated Press, contributed to this report.