Proposal would ban panhandling at medians, intersections in Fairfax County

A proposal to make panhandling illegal on medians and at intersections is up for review in Fairfax County Virginia. The bill's sponsors say that panhandling in traffic is not safe and there are other ways to help those in need.
Listen now to WTOP News WTOP.com | Alexa | Google Home | WTOP App | 103.5 FM

You don’t have to drive very far in the D.C. area before seeing someone begging for money in traffic. And Fairfax County, Virginia, is considering a proposal to make panhandling illegal from medians and at intersections.

“They’re out there stepping into traffic; they’re holding up traffic,” said Springfield District Supervisor Pat Herrity. “What we’re looking to do is get the people out of the intersections and out of the medians where it’s not safe for them to be.”

“It is unsafe and detracts from our neighborhoods,” Braddock District Supervisor John Cook, the proposal’s co-sponsor, said in a news release. “We have good programs in this county and many nonprofit groups who help the homeless, and that is a better way to help.”

“The money they contribute to the panhandlers that are part of these rings aren’t really going to help anybody,” Herrity said, while noting that homelessness in the county has declined by 44% since 2008 and strong social service programs are in place.

County residents who need help with food, shelter, rent or utilities can call 703-222-0880 for assistance.

Although every member of the Board of Supervisors voted to advance the proposal to ban panhandling from medians and at intersections, the Fire Department’s “Fill The Boot” program might pose a challenge to be addressed before a new ordinance gets approved.

Working at intersections to collect money from drivers for the Muscular Dystrophy Association, Fairfax County had the highest collecting “Fill the Boot” Campaign in the United States and Canada in 2018. 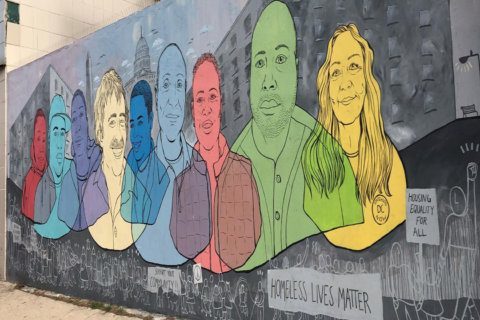