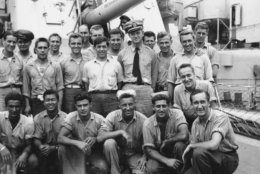 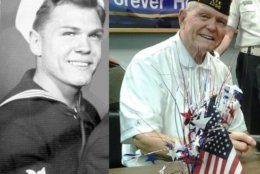 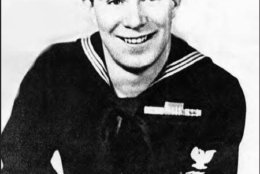 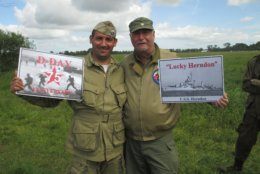 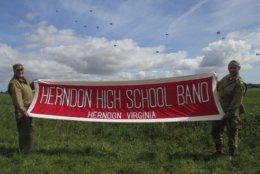 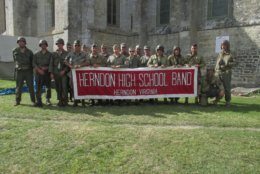 The Herndon High School band of Herndon leaves Tuesday to participate in 75th D-Day celebrations in Normandy. Band members will carry pictures and stories of crew members who served on the USS Herndon during the invasion.

“For the past two years, I’ve been tracking down the families of these men to ask for a photograph. And out of 301, I was able to find the families of 293 of them, and I have pictures of nearly all of those,” said Margaret Jamborsky, whose daughter plays piccolo in the Pride of Herndon Marching Band.

Known as the band’s USS Herndon historian, Jamborsky said at least half of the families she contacted didn’t know the name of the ship their loved one had served on and the vast majority had no clue that it was the lead ship of the entire Allied armada.

“So, I’m calling these perfect strangers across the country, telling them, we’re going to honor your father at the 75th anniversary of D-Day. And grown men have been sobbing on the phone: ‘You’re honoring my father?'”

Learning about all the men has been a moving experience for the band’s brass captain, senior Thomas Longuillo, 18, who plays trumpet.

“Learning about them and what they enjoyed doing in high school with their friends back home before they were sent off, it makes the experience more personal to represent an individual as opposed to this collective of, just, soldiers,” Longuillo said, on preparing to carry the ‘honor tags’ depicting the ship’s crew members.

“It’s heavy almost to think about how me, not even out of high school yet, and going to college, that I could have been sent to Europe to fight a war,” Longuillo said.

Band director Kathleen Jacoby said three of the students will wear the original dress blues from sailors on the USS Herndon. “There’s something about touching the fabric the first time you unrolled it and we held it up for the kids and everyone’s crying. This is real. This is who we are, “Jacoby said.

The band will be taking an American flag that flew on the USS Herndon.

“The first stars and stripes to ever fly in German occupied territory on D-Day,” Jamborsky said. “It will fly again. But this time, it will fly in peace.”

USS Herndon veteran James Clemont, 94, of Minnesota, will accompany the band to France as a VIP guest who Jamborsky said will be treated like royalty.

The band’s entourage of about 300 also includes about 45 family members of other USS Herndon crew members, about 50 chaperones, about 10 friends of the band and nearly 150 student band members.

“It’s grown. It’s taken on a life of its own and the USS Herndon is as much a character in this whole play as anybody else,” Jacoby said.

The Pride of Herndon will march through a small French town that was the first to be liberated, play at the American Cemeteries in Brittany and at Omaha Beach and perform in the D-Day Musical Salute to Liberation.

Preparing for the trip has involved a seemingly endless amount of logistics and paperwork for everything from security clearances to medical records. Packing instruments and uniforms earlier this week was complicated, Longuillo said, but, he believes the biggest challenge has been preparing mentally.

“Making sure we all understand what we’re doing and that this isn’t, you know, we’re not going to the amusement park to play a short concert and then ride the rides,” Longuillo said. “You know, this is, this is real.”