A parking garage had collapsed and there were bodies buried in the rubble. But this wasn't a real disaster, and it wasn't a movie set either. It was an annual training exercise that Fairfax County Fire and Rescue's Task Force 1 participated in this week alongside their counterparts in Los Angeles.
Listen now to WTOP News WTOP.com | Alexa | Google Home | WTOP App | 103.5 FM
(1/7) 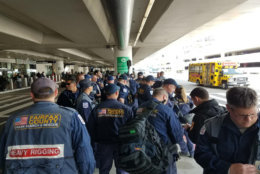 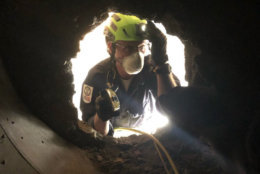 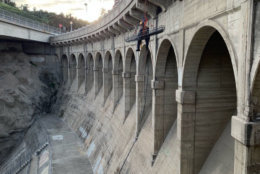 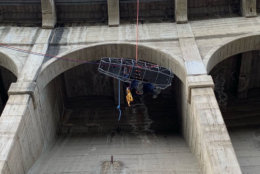 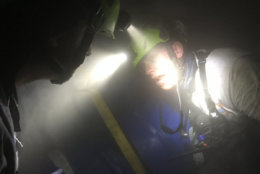 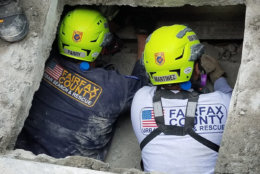 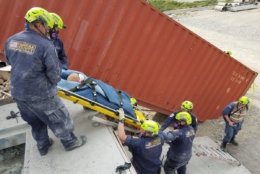 This week, members of one of the most elite rescue teams in the world traveled from Northern Virginia to Los Angeles to immerse themselves in a disaster zone. A parking garage had collapsed, an elevator had too, and there were bodies buried in the rubble.

Of course there was no disaster in California this week. But this wasn’t the set of a movie being shot either. Instead, it was an annual training exercise that Fairfax County Fire and Rescue’s Task Force 1 participated in this week alongside their counterparts in Los Angeles.

Around the world, the team from Fairfax is known as USA 1, while LA is the home of USA 2. When disaster strikes, they’re the ones who respond, and they need to be ready for the worst disasters you can imagine.

“Once a year, USAID asks both LA County and Fairfax County to get together when possible to perform one of these exercises,” said Fairfax County Fire and Rescue Battalion Chief Randal Bittinger, who leads USA 1. “This week we’re actually simulating that we had an earthquake in the Philippines. Our members have to train on these type of structures because we never know what we may encounter if we actually have an event.”

Hurricanes, earthquakes and structure collapses are all events they’ve had to respond to before.

“We try to simulate as much as the situations that we encounter,” Bittinger said.

The situations members of this elite team encounter go way beyond fighting fires and running the EMT calls that most members usually deal with at home. And it takes a range of often surprising skills.

“All of our firefighters are also EMTs so they’re classically trained as medical technicians,” Bittinger said. However, to stay on this team “they have to work both as a general contractor, construction worker, engineer, crane operator, vehicle expert. You name it, they’ve got to be able to deal with it.”

That’s why training this week involved working in very small, confined spaces underground and high in the air.

“We’ll actually have them hanging off of a rope, working a jackhammer on the side of a building. Just to get them used to working in different environments.”

To test the skills of their canines companions, they also had to play the victim, volunteering to get “buried” under collapsed buildings and made to sit there sometimes for hours; search dogs need to be able to train with real human scents that can’t be replicated by a mannequin.

But Bittinger said that experience also has some benefit for USA 1 members who are used to doing the digging, not being dug out.

“That gives them the realization of what it’s like … to hear the noises from the outside,” Bittinger said. “What it’s like to be packaged and hauled out of somewhere. What that fear can be like being trapped, not knowing if someone’s coming.”

One other fringe benefit of this training and experience, noted Bittinger, involved the care of animals. Since canines are bound to get injured as they claw through fallen buildings or hurricane devastated regions, the doctors and EMTs who serve on USA 1 need to be able to care for animals too.

“Our doctors have to be trained to do some veterinary care, along with our paramedics,” noted Bittinger. And that’s training that could end up serving not just you, but your pet as well, if you experience a disaster of your own.