Va. teen does over 10,000 pullups, to be verified by Guinness World Records

“I wanted to raise awareness for ocean conservation,” said Andrew Shapiro, 19. “I don’t think there’s enough light being shed on it, and the oceans are suffering.”

The event also was a fundraiser for the Sea Shepherd Conservation Society.

Documentation Shapiro has submitted to Guinness World Records includes the required video recordings from two angles under the supervision of two judges, restricted to shifts of four hours at a time. 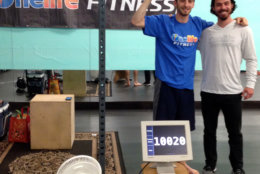 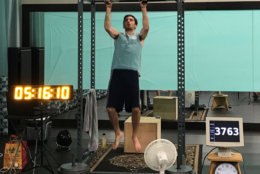 Back in 2016, Andrew set records for the number of pullups in six-, 12- and 24-hour periods when he did 7,306 in 18 hours to raise cancer awareness after his dad, Allen Shapiro, was diagnosed with colon cancer.

“It exposed that even in normal families, cancer touches everybody,” Allen said. “It’s very emotional for me to see my son put his body to such distress over a long period of time … but in the same token, I’m just immensely proud of him for setting a goal, following through and achieving his goals.”

Andrew’s most recent effort is inspired by his studies at the University of New Hampshire, where he studies marine, estuarine and freshwater biology.

His mom, Stephanie Shapiro, said Andrew always has been a meticulous, careful planner — qualities that were put to good use during training.

“Hopefully he keeps applying these things to whatever he’s passionate about. Last time it was his father’s cancer diagnosis and this time it has to do with his career. So, hopefully he keeps that passion moving forward and lives his dreams!”

“I’ve [always] been pretty athletic. And yeah, I guess I’m pretty strong,” Andrew said. At 5 feet, 11 inches tall, Andrew weighs 155 pounds. But he said he lost a lot of weight while training and during the event. “I burned off probably more than 12,000 calories, and I really didn’t eat too much,” he said.

So what’s next? Shapiro plans to rest awhile and go fishing. Then, he said, he’s going to begin preparing for the next challenge.

“I’m going to get back on the grind for “American Ninja Warrior” — start doing some full body training,” Shapiro said.

Stephanie believes it’ll take about three months to learn whether the records are officially verified.

“Last time, they sent him these framed certificates that say ‘Guinness World Record holder’ and the title of the record,” Stephanie said.