Coronavirus News: Doctors often aware of early COVID treatment | Kids could start getting vaccines by Nov. 4-5 | Ed Sheeran gets COVID-19 | Local cases of COVID-19 | How many in DC region are vaccinated?
Home » Fairfax County, VA News » Residents said 'no, thanks'…

Residents said ‘no, thanks’ to bridge to eliminate Fairfax Co. flooding

Some of the people who live near Hunter Mill Road near Difficult Run Creek in Fairfax County say they were offered a solution to the periodic flooding years ago and decided it was worse than the problem they still face. "It would have been a monstrosity," said one resident.
Listen now to WTOP News WTOP.com | Alexa | Google Home | WTOP App | 103.5 FM

VIENNA, Va. — The sight of rain water overflowing the banks of Difficult Run Creek and completely submerging several hundred yards of Hunter Mill Road would probably inspire most people to search for a solution.

But people who live there, who have endured decades of flooding after heavy rains, heard the solution and said, “No, thanks.”

“It would have been a monstrosity,” said Patty Icke, who along with her husband owns Angelica Run Farm, a horse farm.

About 20 years ago, the Ickes said, a plan was devised to replace the two-lane bridge with a four-lane span that would have required raising the roadway across the creek, and in the neighborhood, two dozen feet in the air.

“It would have looked like the Whitehurst Freeway” in Georgetown, said her husband.

“And they wanted a 50-mile-an-hour curve, at the bike trail up there,” Patty Icke said, gesturing over the washed-over bridge.

Neighbors raised a stink, and “the community got it defeated,” she said.

“The plans were for a taller and longer bridge, but residents rejected it and wanted something pretty much the same as before,” said Ellen Kamilakis, senior public affairs officer with the Virginia Department of Transportation.

Instead, in 1993 VDOT installed a two lane timber and steel bridge, which became corroded within a decade, and has been replaced with a temporary structure.

Eventually, a permanent two-lane bridge will replace it.

“Once the temporary span gets closer to the end of its useful life, a replacement will be more likely to be funded,” said Kamilakis.

Icke and her husband said they installed flood gates to replace the white fence that would inevitably be destroyed whenever Difficult Run would splay across Hunter Mill.

Even if nothing is done, the Ickes said, the floodwaters disappear in a matter of hours.

“It’ll be gone, and you really won’t know what was here,” Patty Icke said. “This is just something we live with.” 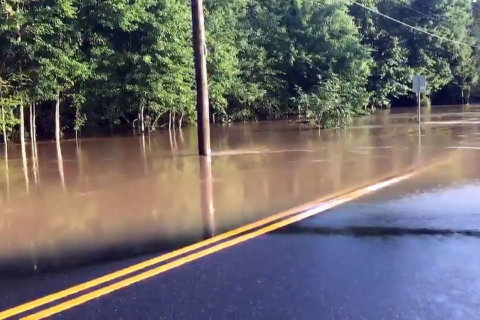