Peter Swaak, one of the robotics team captains, said he and his teammates thought their season was over this year when they got an email saying the team was heading to the 2018 robotics competition via a wild card slot.
(1/4) 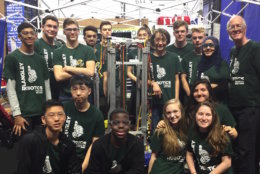 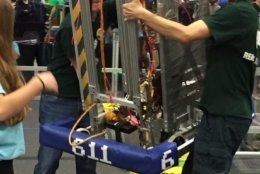 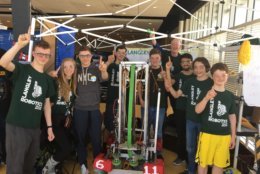 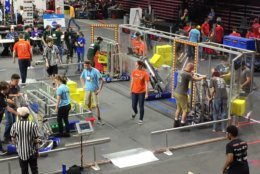 WASHINGTON — A robotics team that was a bit of an underdog is heading to the world robotics championship in Detroit next week.

Peter Swaak is one of the captains of the robotics team at Langley High School in McLean, Virginia. He said 31 teams from the D.C. area qualified for the world competition. In total, over 400 teams will be competing in the 2018 FIRST Championship.

Swaak, a junior, has been on the Langley robotics team since his freshman year.

“This is actually our first year that we ever won an event,” he said.

It is the first time the team has won in its history since its creation in 2001. In March, the team finished in first place at the Chesapeake District Southern Maryland event.

Swaak said he and his teammates thought their season was over this year and had packed up their robot. That is when they got an email saying the team was heading to the 2018 robotics competition via a wild card slot.

“We received a wild card, and that’s how we’re qualifying,” Swaak said.

The FIRST Championship is the country’s top high school robotics competition which invites teams from other countries.

“There are teams from across the world. I know there are few from Canada, a bunch from Europe,” said Swaak.

He is hopeful the team will do well. Even though Swaak and his team have their eye on winning, he said his trip to Detroit is more than about just winning; it is also a chance to meet other students from other schools who have the same interests.

The competition will be streamed live from Detroit from April 25 to 28.

This FIRST (For Inspiration and Recognition of Science and Technology) Championship is actually a dual championship. Last week, the competition was held in Houston. Swaak said that competition is mainly for the west coast teams and teams from Asian countries.

According to FIRST, more than 15,000 students in grades K-12 will participate in the championship in Detroit. The FIRST Championship offers three levels of competition for students depending on their age.

High school students who participant in FIRST programs can apply for college scholarships.